Not many people start careers the way New Jersey-native Sam Russo did in 1982 when a serious motorcycle accident left him temporarily disabled. Therapy consisted of walking behind a friend's lawn mower. Two and one-half million lawns later, he still hasn't looked back. 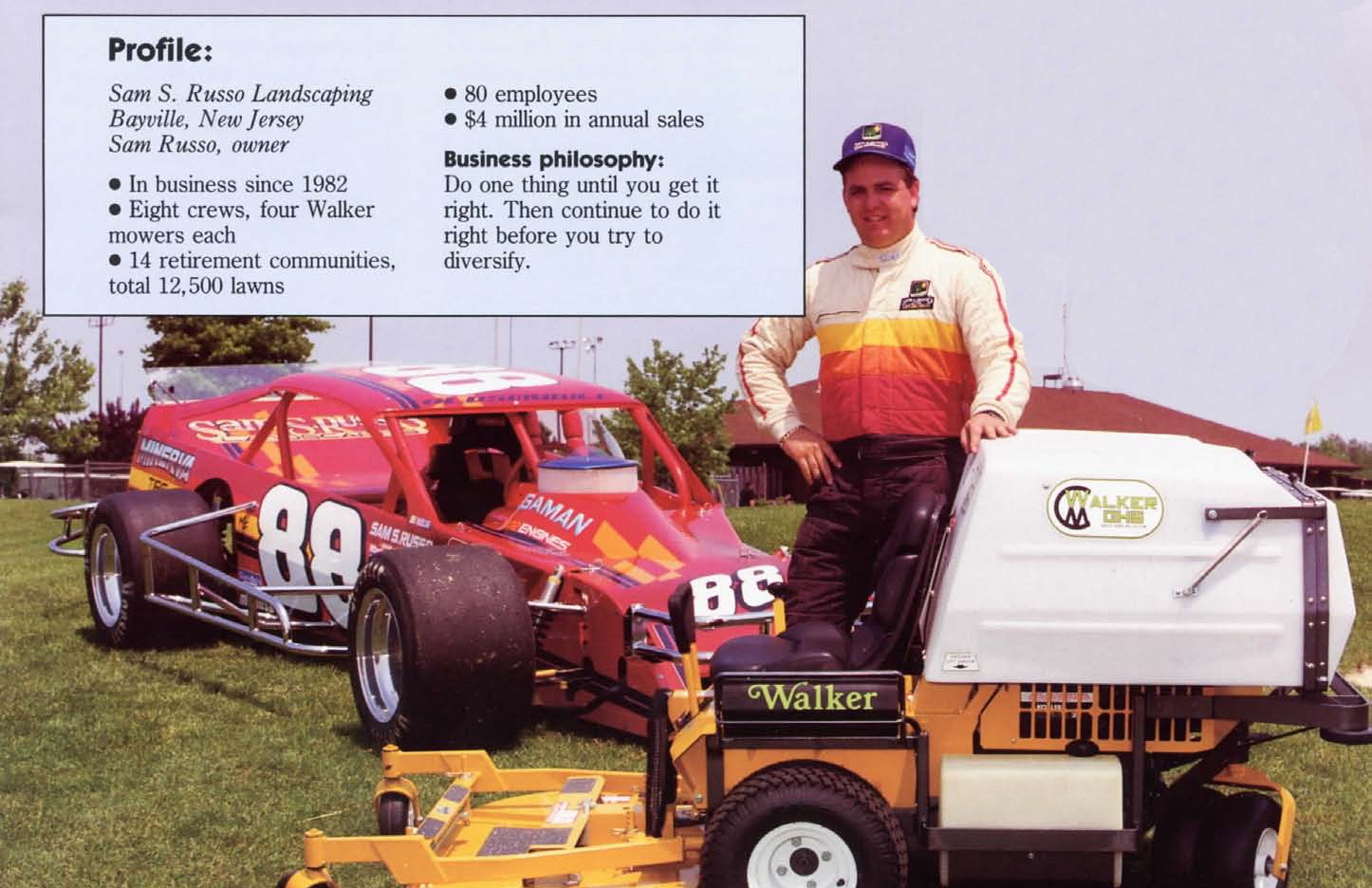 But Sam doesn't do many things the usual way. In addition to running an exceptionally successful landscaping business, a recent venture into selling outdoor power equipment has taken off as has an even more recent trek into operating an outdoor power equipment distributorship. If that isn't enough to keep him busy, consider the fact he drives a race car professionally nearly every weekend during the summer, and still finds time to enjoy his wife, Suzanne, and their four children. This man has energy.

Talking with Sam is an experience in itself. He claims he never really excelled in school, and that sports and other extracurricular activities never caught his fancy. Those early days behind his buddy's push mower must have been impressionable, however, because Sam knows mowing. He knows that a crew of four employees with four Walkers can mow on average a lawn a minute. He knows that by using one Walker mower instead of a deck (intermediate walk mower) he can increase his production per mower twofold. Two Walker mowers can do the work of four deck units and he saves on two employees' salaries to boot. Oh yeah, Sam knows how to be competitive on and off the racetrack.

A year after the accident, Sam opened his own lawn maintenance business. With one employee and two deck mowers, he grew his business to 125 accounts. "I quickly 'maxed' out with a deck mower so I looked for an alternative," he relates. The hunt took him to a Walker dealer nearly 100 miles away.

A few of his customers balked at the sight of the new mower. They thought Sam should be earning his keep by walking and they didn't really trust a machine that moved so fast. In fact, 10 percent of his customer base left because of the new mower. But Sam made up the difference in a hurry. By the end of the year he had bumped up his mowing base to 180 private homes and 16 small businesses.

His business took off like a rocket. In 1984, Sam signed his first retirement community contract. That client alone added 798 lawns to the mowing schedule. From 1985 to '87, he picked up more retirement communities and by the end of '87 crews were mowing 11,000 retirement homes. Sam had found his niche and the machine to mow it. In the meantime, he gradually turned away from the private home and small business market.

Today, Sam S. Russo Landscaping maintains 14 retirement communities for a total of 12,500 lawns. In addition to mowing, crews fertilize, edge, install and remove trees and shrubs, and plant flower beds. In the winter, the Walkers are fitted with snow blowers. Sam also heads up a custom landscaping crew, which he oversees himself.

Eight maintenance crews do the brunt of the work. Each crew is equipped with four Walker mowers.

Efficiency is the name of the game for crews. Once the mowers are driven off their enclosed trailers, they are not loaded back on until the job is finished or the workday ends, whichever comes first. Operators simply start at one end of the community and head toward the other, mowing lawns as they progress.

"Some days we get such a good rhythm going, crews don't stop for lunch," Sam tells. "Once the rhythm is broken, it's difficult to recapture it." Instead, crew members will break an hour or two after the noon hour, with literally acres of mowed lawns lying in their wake.

The regimen puts equipment to the supreme test. Even by commercial mowing standards, Russo crews mow a lot of lawn. In fact, Sam prides himself as being one of Walker's East Coast testing grounds. With his help, company head engineer Dean Walker has instituted 30 or more design changes in the original mower. Today, Sam says the 16-hp mower is "bulletproof. " As a testimonial his crews today operate more than 30 of them. Ninety percent of the units are equipped with a 42-inch deck.

Ignorance Is Far From Bliss

Sam attributes his success to three things. The Walker mower and the company's willingness to work with him on changes, persistence bolstered by more than a little luck, and the fact his competition was slow to learn the value of using a Walker.

"My competitors looked at the Walker mower and told me they could buy two deck mowers for the price of one Walker. They were right. But I told them I could do twice the work they could, with only one mower and one employee."

The competition's reluctance to try the new Walkers gave Russo a competitive advantage, the ability to mow lawns for less while producing a quality cut. And he's still mowing lawns for less, he explains. "Basically, I'm cutting lawns today for the same price I did in 1982." 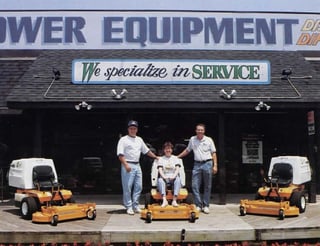 But Sam is not in the business of keeping fellow landscapers in the dark forever, especially since becoming a Walker dealer in 1985. At the time he needed a dealer close by to service his mowers and to supply parts. When he couldn't find one, he was awarded his own dealership. Between 1985 and 1988, he sold 20 and 30 units a year. When area dealers suddenly became interested in Walkers, Sam says his Walker distributor Bob Oestreich, owner of Precision Works on Long Island, stuck by him. In 1989, Sam purchased an existing power equipment dealership, ACE Power Equipment, and become a full-line dealer. He more recently purchased a new location right on one of the main highways in Bayville. Last year, his power equipment business did $2.5 million in gross sales. A nice complement to his $4 million landscaping operation. Just last year, he also became a distributor of Dixie Chopper and Howard Price mowers.

Sam found his landscaping niche, and he encourages all of his 170 ACE landscaper customers to do the same.

"Do one thing until you get it right," he advises his customers. "Then continue to do it right before you try to diversify."

If experience makes him a "hot item" for landscapers who want more than a little advice. And he's willing to share.

"When you first start out, you can buy the right mower and hire the right people, but you can't buy a reputation. It's so important to treat customers right, right from the very start.

"As you develop and grow, it will become necessary to spend more time doing administrative tasks. One of the most depressing things that happened to me was when I had to go behind a desk full time." But it's necessary, he adds. Owners have to spend their time in the most productive way possible. And he tells that sitting behind a desk can be as challenging and rewarding as operating a mower.

Sam says he 's learning every day to be a better administrator. As an example, he recently helped develop a company newsletter and a new computer printout - called a complaint ratio list - to help him keep an eye on employee performance. The list also doubles as a handy sales tool. If a trustee or community manager questions a crew's performance, all Sam has to do is show him the ratio. More than likely the ratio of complaints for one weekly visit will fall far below 1 percent. Can't argue with that, especially when every homeowner in a retirement community is considered a customer.

There are two ways to make money, Sam points out. Landscapers can increase profits by developing new business or by finding more efficiencies at home. One recent internal change at Sam S. Russo Landscaping, for example, saved the company $60,000 annually. The change was simple. Crews opted to use a mulching deck where feasible. The move alone reduced the company's daily grass clipping consumption from 500 cubic yards to 350. Tipping fee savings were substantial.

Sam also advises landscapers to pay close attention to details when buying new equipment. He knows that a Walker isn't for everyone - after all, he's a dealer for other brand names, as well. The key, however, is to find the product that fits the application.

He explains that he test drives every new piece of equipment his company buys. "I can't give Walker all of the credit for our company's success over the years, but I will say that if we weren't using Walkers, we wouldn't be mowing over 12,000 lawns like we now are."

While not all areas of the country are as competitive as they are in New Jersey, mowing as efficiently as possible is the key no matter where you are. As Sam soon discovered, a competitive advantage can be leveraged very quickly into new, profitable work.

Sam S. Russo Landscaping has all of the business it can currently handle. The fact each of the company's 14 clients is on a three - or five - year contract makes the future look bright. Expansion won't happen right away, Sam notes, since to get any bigger would require some restructuring, including possibly adding another management layer.

With his equipment business going strong and his new distributorship getting up to speed, Sam is looking ahead. One of his immediate challenges is to improve the quality of life for his 80 employees. A pension plan, 401K and profit sharing are among programs he's considering. As he explains, to be successful in the long term, companies have to be willing to reward those who helped them get there. Many of Russo's employees, at ACE and in the landscaping division, have been with Sam for years. It's time to pay them back, he notes.

The word "retirement" is a strange one indeed coming from a man in his early '30s. Yet Sam utters it, saying with a smile he would like to semi-retire in two years. What does that mean? It means simply he wants to cut his work week down to 40 hours, to have more time to spend with his family and to play - to race cars. Believe it or not, retiring to 40 hours will also give him time to do one of the things his still enjoys most, to drive a Walker.