Age is no barrier for this mowing contractor

If only Ralph Anderson had a crystal ball in 1946. At the time this 14-year-old farm boy and his brother were pulling an old reel mower down the road behind a Model A Ford. They were mowing 20 to 40 yards a week for what today would be pocket change.

Nearly a half century and several career changes later, this spry 76-year-old maintains 75 accounts with five Walker Mowers. Three retired farmers, a couple of shift workers, and students who work in-between classes and other part-time jobs comprise his able workforce.

The owner of Anderson Lawn Care in Wyanet, Illinois, was born and raised in a Swedish farming community. He served on the front lines in Korea in 1952 and started farming two years later—with the help of his “300 dollars for mustering out” pay and a $3,500 FHA loan. Anderson ran a grain/livestock operation for the next 15 years, after which he sold out and became an AMWAY direct distributor.

“I had a lot of ideas going at the time,” Anderson recalls. “I guess you can say I was, and still am, an entrepreneur at heart. In 1985 I purchased a lumber yard here in town and turned part of it into a retail mall. The adventure paid off for awhile, but then times got tough.

“Through AMWAY I had met my wife, Marcella, and to make up for a cash shortfall, I took on a few small lawns from her church members,” Anderson continues. “At the time I was also helping my son mow a few lawns. The work just kept on coming. In 1993 I purchased a Simplicity mower. A year later I added a John Deere garden tractor.”

Anderson saw potential in the business as his client list gradually grew. In 1995 he met a Walker Mower distributor at the Illinois Farm Progress Show. After the show the former farmer and retailer purchased a 20-hp Walker Mower and two decks: a 54-inch side-discharge deck and a 48-inch GHS deck. “I still have that mower,” Anderson muses. “Years ago, though, it fell off a trailer and the dump box was smashed. I’ve since fashioned a wood box in its place and use it mostly as a spare.”

This owner says he’s added tools as his business grew. One Walker Mower led to others, and today his crews operate four units full-time: two with 74-inch decks, one with a 56-inch deck and another with a 48-inch GHS deck. His equipment lineup also includes a John Deere garden tractor for mowing smaller lawns, rolling, spraying and plowing snow, and an Exmark rider for mowing larger rough areas. In addition to a full complement of Echo handheld equipment, Anderson also employs four Walker attachments: an edger, dethatcher, broom and snowthrower. 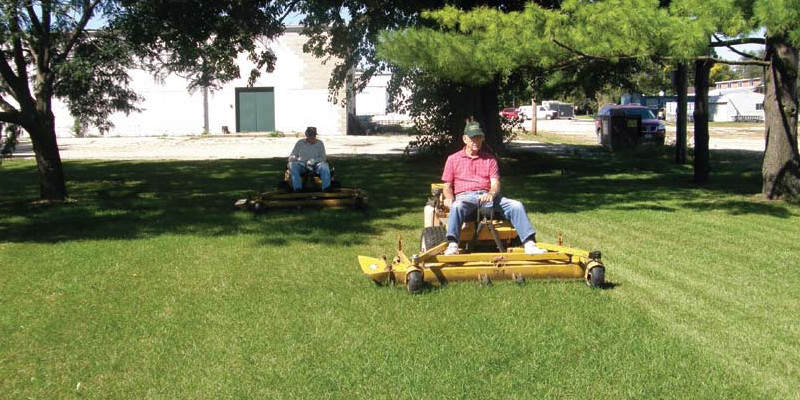 Slowing Down? No Way!

The watershed year for Anderson Lawn Care was 2000. Since then the company has achieved steady, annual growth. Seventy-five accounts now include 45 residential customers, 20 commercial clients, an historical society and a few cemeteries.

“When I purchased my first Walker, I hired one part-time employee to help me trim,” Anderson recalls. “Over the years I’ve brought along several different young fellows who enjoy working outdoors. I also rely heavily on retired farmers and area shift workers. Both have great work ethic. The farmers especially are very familiar with equipment.”

Like so many other mowing contractors, Anderson started by working out of his home, using his car port and garage for storing equipment. But a few years ago he purchased a facility right in town. Calling it a “work in progress,” the owner now has plenty of room to store and maintain equipment, keep some nursery stock on hand, and add that new Walker Super B he wants.

Anderson looks at Marcella who just shrugs her shoulders. His wife (and office manager) understands her husband’s attraction to the Walker Mower line. She glances at a yellow note pad on the table where Anderson has itemized all the reasons he prefers Walker Mowers over other brands. He begins reading: “First of all, nothing does a nicer job of mowing. My customers like the results, and my employees like to use them. Their low profile makes them easy to get on and off. Operators just sit back and relax and the mower does the work.”

Anderson continues to read, “I do most of the maintenance myself. The mowers are compact and easy to store, and the deck lift makes cleaning the deck and changing blades a breeze. Walker Mowers are smart-looking, with an attractive color and design. They hold their resale value and are gentle on lawns if you know how to operate them.”

Anderson takes a deep breath. “I could go on but you get the idea. Yes, there are other good mowers on the market, but for my application, nothing beats these machines. Walker Manufacturing backs up its product, and I like their home-family way of doing business.”

Anderson taps on his note pad and says, “Enthusiasm is the yeast that makes the dough rise. I’m enthused about the Walker Mower. That’s why I’ve attended both of their Walker Family Reunions and am ready for the next one.” 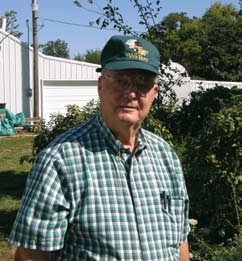 When asked if retirement was in his future, Anderson just smiles. “Oh, I don’t have as much energy as I used to, but I enjoy doing what I do.” In addition to mowing properties approximately 26 times a year, his crews do spring cleanup work, including dethatching and rolling properties. They seed, fertilize and spray, perform some landscape installation for clients, prune and trim trees and bushes, and remove snow.

“We’re a little more laid back and informal down here than contractors in other parts of the country are,” Anderson emphasizes. “We don’t use a lot of sophisticated spreadsheets to track costs, and we don’t have uniforms per se, although I outfit employees with two different types of caps depending on the season. From time to time, we will give customers hats, pins, pens and other small items to express our appreciation, and, in the fall, we host a dinner party for our employees.”

Life is pretty straightforward down here, Anderson adds. It’s a farming area where residents still appreciate older values and do business exchanging a few words and a handshake.