His 60 residential customers would have no argument there. The small family-run company provides a full array of services, everything from lawn mowing, trimming and edging to fertilizing, weed and insect control, and pruning. A three-man crew comprised of Dennis, his son Mark and five-year employee Eddie Carrio also installs landscapes, and wife, Pat, operates a customized home watch service.

“Every customer’s landscape receives the same treatment,” says Dennis. “When our crew leaves a property, we know our effort is more than ‘good enough.’ It absolutely has to be our best effort, because our goal is to leave it as the best-looking landscape in the neighborhood.”

Even though Cutzgras has been working in Charlotte County since 1986, this isn’t Dennis’ first career. Before then, the family lived in Connecticut where he taught junior high English for 20 years. “After Pat took a bad spill on the ice, we decided to move somewhere warmer,” Dennis recalls. “I retired from teaching with the intent that we could turn our part-time summer job mowing lawns in Connecticut into a full-time business in Florida. We purchased a small lawn maintenance company in Port Charlotte and here we are, 28 years later.” 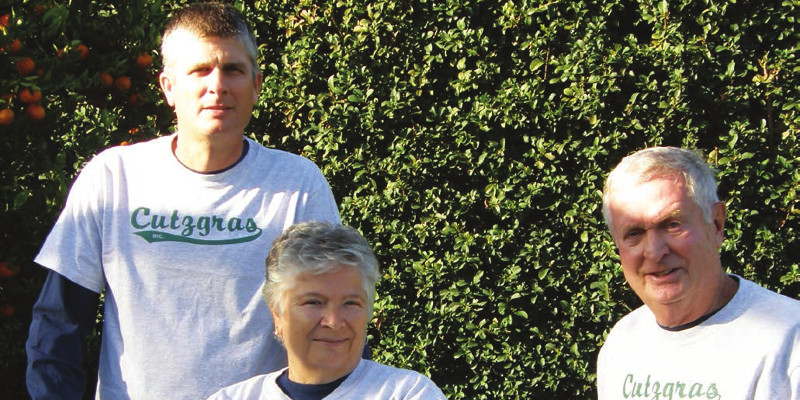 Throughout, every family member has worked in the business at some time. That includes son Douglas and daughter Laura, who now have other occupations. Mark joined the family business full time in 1995.

Says Dennis, “What more can one ask from a career? I get to work every day with my wife and son. We feel that Eddie is part of our family, too. This is a lifetime business in paradise, and, as an added bonus, you just happen to be the boss.”

For eight years, Cutzgras mower operators, primarily Dennis and Pat, walked behind a mid-size mower. “If you’ve ever walked on Floratam grass, you know how long days can be,” Dennis relates. “It’s very spongy, which makes walking difficult. So after a couple of years researching riding mowers and trying virtually everything on the market, we purchased our first Walker  from A-1 Mower here in Port Charlotte. It was a diesel with a 42-inch side-discharge deck.” 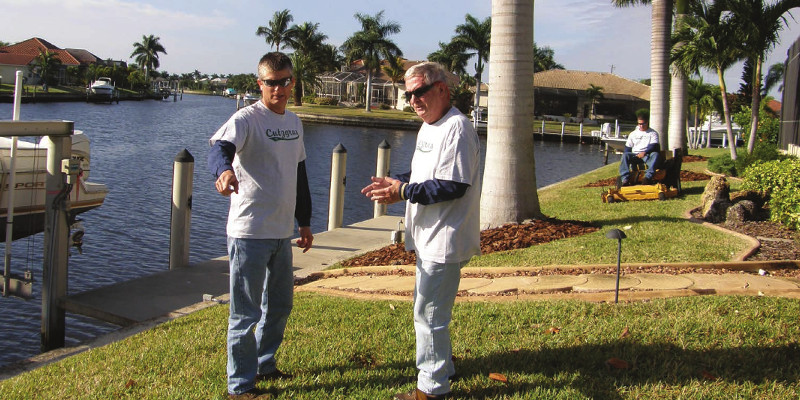 Cutzgras has since purchased two more, one in 1998 with a 52-inch sidedischarge deck and another in 2004, equipped with a 42-inch side-discharge deck. Both are diesels.

“Our first Walker has more than 11,000 hours on it,” Dennis says proudly. “We just replaced the engine last year. It has been, and continues to be, a real workhorse for us. In fact, we also use it to fertilize lawns by attaching a spreader to the deck. Adapting the mower’s light switch allows us to easily turn the spreader on and off.”

The Jontoses have also designed and installed deck plates that fit over the discharge chute. With a flick of a foot, side-discharge decks become mulching decks. Being mechanically-minded runs in the family. Mark was a jet engine mechanic on a Navy carrier for four and a half years. His father was a helicopter mechanic in Vietnam. The training and discipline they received in the military also contributes to the company’s attention to detail on and off the job.

Being detail-minded displays itself in many ways for the Cutzgras crew. On garbage pickup day, for example, Dennis, Mark or Eddie will carry empty cans from the curb to their customer’s house. There’s never a speck of grass left on the walk or drive, and before leaving a property, the crew turns around just to make sure everything is in order.

“Customers can also set their watch by us,” Mark adds. “In fact, one day we were an hour late for some reason and a worried customer called to see if we had had a mishap along the way.”

This discipline translates into how the company maintains its equipment. In addition to being vigilant about preventive maintenance, Cutzgras puts each of its mowers, as well as its enclosed trailer, through an aggressive end-of-year maintenance regimen.

Mark explains, “We literally take apart our Walker Mowers, pressure wash them, and replace virtually every wear part, including bearings, bushings, pulleys and belts. Then we repaint them and apply new decals. Our trailer gets stripped, too, and pressure washed. After allowing the wood to dry out for a couple of days, we repaint the inside and wax the outside.”

They also rotate the trailer’s tires every two months, and to avoid excessive wear, alternate directions driving around the many culs-de-sac in nearby Punta Gorda Isles where the majority of their customers live.

“When it comes to details, good enough is never good enough,” Dennis re-emphasizes. Pat agrees, but shakes her head in frustration with her husband. “Even at 73, it’s very difficult getting him to slow down,” she remarks. “The only way is to get him away. That’s why we’re taking a short vacation in Orlando this winter.”

In the meantime, Pat’s work ethic is nothing to dismiss. A nurse for 35 years, Pat has worked in the field with Dennis and currently maintains the company’s books. Eight years ago, she also launched a home watch service. Twelve customers who spend summers elsewhere give her their house keys and alarm codes. At least once a week, Pat makes the rounds to ensure that air conditioners are running and water isn’t. The effort generates additional revenue for Cutzgras while easing a customer’s mind.

Few states suffered more through the recent economic downturn than Florida. The housing market took a free fall and landscape contractors either changed the way they conducted business or disappeared. Now, water and nutrient restrictions add to the challenges.

None of the above, however, compares to what Port Charlotte residents suffered through in August 2004 on Friday the 13th. Traveling up the Gulf Coast, Hurricane Charley made an unexpected right turn in the warm waters off Port Charlotte and cut an 8-mile swath from the city all the way to Orlando.

“Winds were clocked at 150 mph, with gusts nearing 180 mph,” Dennis recalls. “The storm was fast. It only lasted three hours. But in that time it destroyed homes, parts of the city, and left us without power for days.”

Pat and Dennis held up at home, at times bracing their bodies against the front door to keep the wind out. Their roof was severely damaged when two huge trees toppled over in their yard, and the house itself suffered serious structural damage. Their business was not left unscathed either, as grass cutting was halted for five to six weeks.

“We spent weeks cleaning up,” says Mark, who was living in nearby Fort Myers at the time and dodged the brunt of the storm. “Our Walker Mowers were lifesavers for us. We used them to drag palm trees, pool cages and debris to the curb, and to haul countless loads of broken ceramic roof tiles from lawns.”

The Walker Mowers proved their worth again after the cleanup, adds Dennis. “When returning to a mowing schedule, we just raised the decks as high as we could and the diesels allowed us to cut right through the grass.”

The area made a quick recovery, though, as neighbors pitched in to help each other. In fact, four years later, in 2008, one of Cutzgras’ customers even made the Walker Mowers “Beautiful Places Calendar.” Mark and Dennis like to think that their Walker Mowers con - tributed to the look of the property, and they did. But without their attention to detail, the property would not have been good enough for the calendar—or more importantly, for the Jontos family. 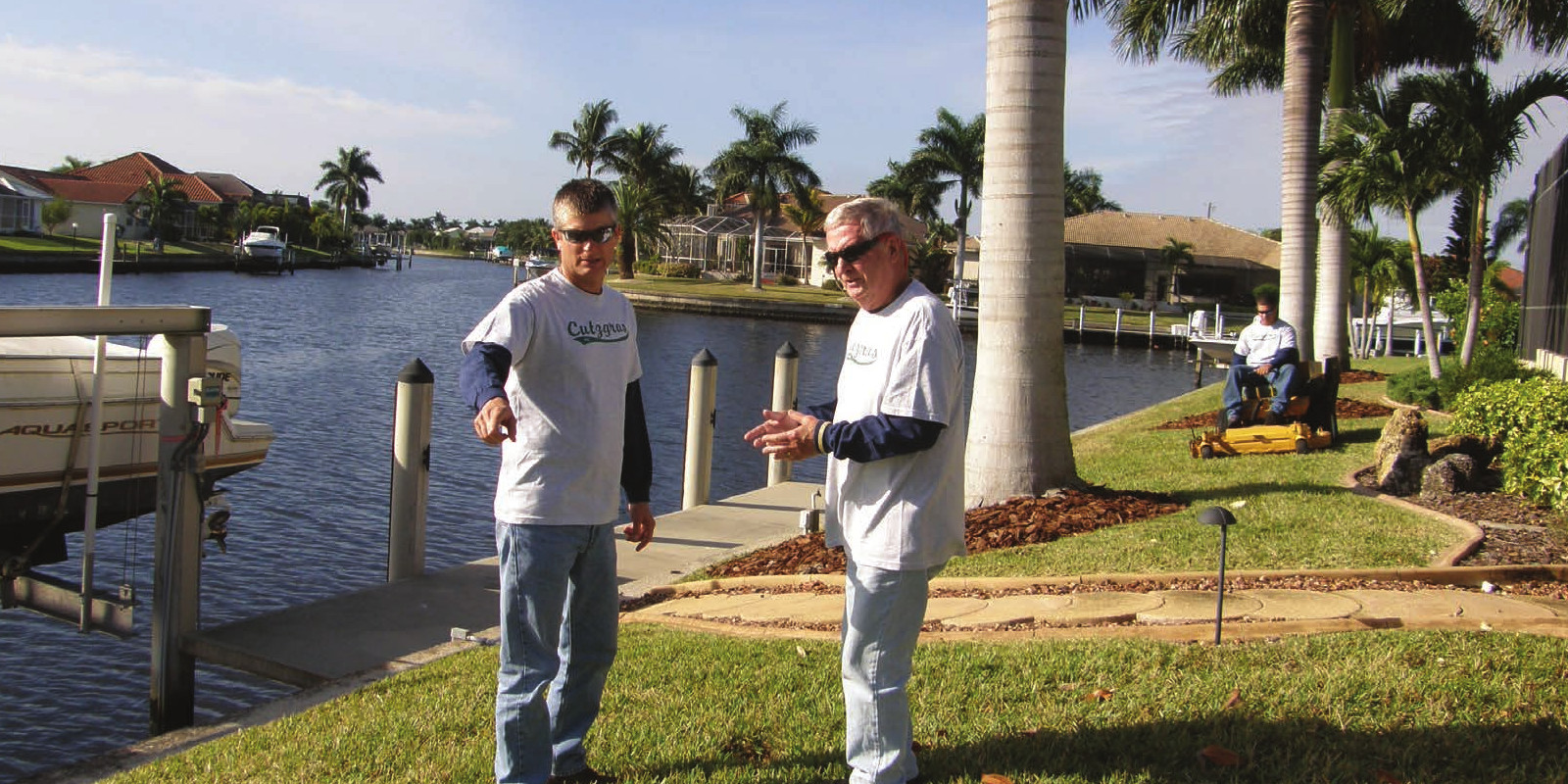