Brothers Dave and Peter Lucadano had a dream in 1985. They wanted to become the biggest and the best lawn maintenance company in the Tampa, Florida, area.

By any standard, that's a big dream considering the number of contractors on the west coast of Florida. By the Lucadanos' standards the dream was even bigger because, at that time, they were in high school and operated a push mower out of the family garage. If that didn't make the dream seem far-fetched, consider the fact the family had just moved to Florida from New Jersey.

The brothers had no ties to the area, little experience, yet they had a goal. "Dave was in 11th grade and Peter was a freshman," recalls family patriarch, Ernie, who himself was getting adjusted to the real estate business after years of being in trucking back East. "The boys had mowed lawns in New Jersey and they wanted to continue the work here, but with a more serious outlook," he notes. 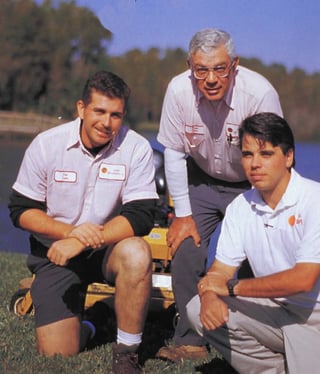 Serious indeed! It's been 12 years since the move. Today, Luke Brothers, Inc., New Port Richey, Florida, is a S3 million plus operation. The company employs 105 people year-round, operates 45 mowers, including 15 Walkers, and has a total of 150 commercial customers spread over a four-county area around Tampa.

To grow their fledgling operation, the brothers employed more than a little creativity. After school, they canvassed the neighborhood and dropped off flyers. In between, at their father's request, they worked at a Chinese restaurant as busboys. Work came slowly. Their first two accounts were their father's and grandfather's properties, followed by neighbors who saw the work they were doing.

"We experimented with a lot of marketing strategies over the years," recalls Peter. "It always comes back to word of mouth. You couldn't beat it then and it still is our most effective marketing tool."

The small company grew. One of the first dramatic changes came in equipment. Florida grass was just too tough for the little 3 1/2-hp push mowers imported from New Jersey. They moved quickly into larger horsepower units, then to midsize walk-behinds.

Customers evolved, too. During the early years, Luke Brothers concentrated exclusively in the residential market, at the peak mowing between 40 and 50 properties a day. As father and sons point out, however, the residential market was tough, especially in Florida where competition seemed to be more intense than in New Jersey.

"Almost from the beginning, Dave wanted to get into the commercial market," relates Peter. "He would pay close attention to those properties, watch the mowing crews and really strive to learn as much as he could about the market."

The company's first commercial account was a strip mall; the second, a urology center that laid them off in the winter. "Being laid off was good for us," remembers Dave. "That taught us a lesson. From then on, we attempted to sign up both commercial and residential customers to year-long contracts, charging them a straight monthly fee. The move ensured us we would have money coming in year-round." And, he adds, in Florida, the only time a company can really make money is in the winter when the growing season slows.

Their big breakthrough occurred when they landed some AAA accounts, giving the company more exposure. A condo complex next to one of the motor clubs signed on and Luke Brothers was off to the races. 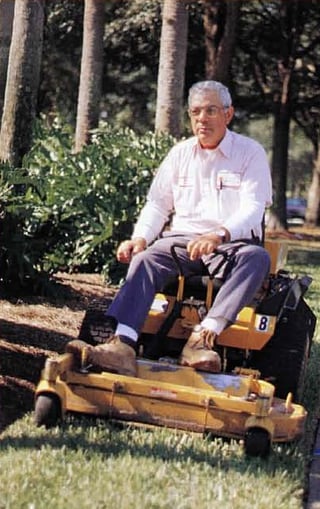 Six years after moving to Florida, Luke Brothers purchased its first Walker. "We were watching a competitor with a Walker and he was doing twice as much as our crews could do, with less manpower," tells Peter. "So we bought one of those little yellow machines and immediately tripled our residential business."

The brothers quickly introduced the mower to commercial accounts. "If a condominium or apartment complex specified a 21-inch mower, we would bid on the account and convince the property managers we could do it better with a Walker," remembers Peter. "We asked them to give us two months with the Walker, and if they weren't satisfied, we would use a push mower. We never used a push mower."

Customers quickly found out the Walkers didn't tear up the grass like other riders, Peter adds. And it delivered a consistently even and clean cut. As Ernie points out, there are plenty of berms and swales on the properties and plenty of opportunity for decks to scalp. The Walker didn't scalp.

The mower had other advantages, too; some subtle, some not so subtle.

"Big mowers created a perception problem with some of our accounts," relates Ernie. "They're loud and they're threatening. The Walker was anything but threatening." But the mower's real advantage, he notes, is their combination of power and size. They are quick and productive, cutting down on line trimming and the use of push mowers, and their small size cuts down on damage, especially in some of the mobile home parks.

One Walker led to another. Up to three years ago, all of them had grass handling systems. A methane gas problem at area composting facilities put a curb on clippings and the company made a switch to mulching decks. Now, all properties are mulched.

"The Walkers mulch the grass into almost nothing," says Peter, "to the extent people say they can't even find the clippings." 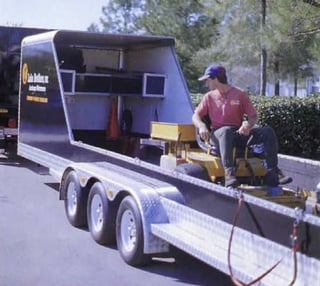 ''I'm not saying it just to be polite, but the Walkers have been a great part of our success," he emphasizes.

The Lucadano family came to Florida with little mowing experience. Yet within a few years, they had built a business of which they could be proud. In fact, by 1992, there was so much work, Ernie gave up his shirt-and-tie real estate job to work full time with his sons. How did they succeed?

"We did the basics," explains Peter. "We knew the importance of honesty and we knew how to work. The best allowance our father gave us when we were growing up was no allowance at all."

They also understood the value of hiring hard-working employees. From the very beginning, they treated employees like family and earned their respect by being genuinely concerned about what was happening on their home front. The company also employs an "open door" policy, provides benefits and overall aspires to treat everyone equally.

Luke Brothers also puts profits back into the business. That's evident by their equipment. Trucks and trailers are spotless, and maintenance equipment is all well maintained. The upkeep is just one of Ernie's responsibilities. He spends all Saturday going over the equipment ensuring it's ready for Monday morning startup.

Routine maintenance is a must, as well. The Walkers run 10 to 12 hours a day, five days a week. To keep them impervious to the unrelenting heat and sand, the mowers receive frequent oil and filter changes and blades are changed every four hours. Crews go through about 150 sharp blades a day. 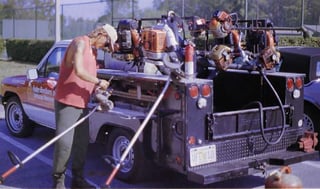 Following good maintenance practices saves money, Ernie points out. Their first Walker is still operating and both the brothers and father say they have no plans to sell any of them. Routine maintenance will keep their Walkers going strong.

The company looks to save money in other areas, too. Instead of buying fuel at retail, they have it delivered on site. The move saves approximately 10 cents a gallon on gas, not to mention countless hours fueling at stations. They've also designed their own truck beds and have transformed small pickups into traveling workshops to hold equipment, tools and repair parts, fuel and air.

In the end, it all comes back to the fundamentals: people, equipment and how the company takes care of both. Luke Brothers is riding high in both concerns. Not only is it one of the biggest landscape contractors in the area, but it has to be among the best, too.