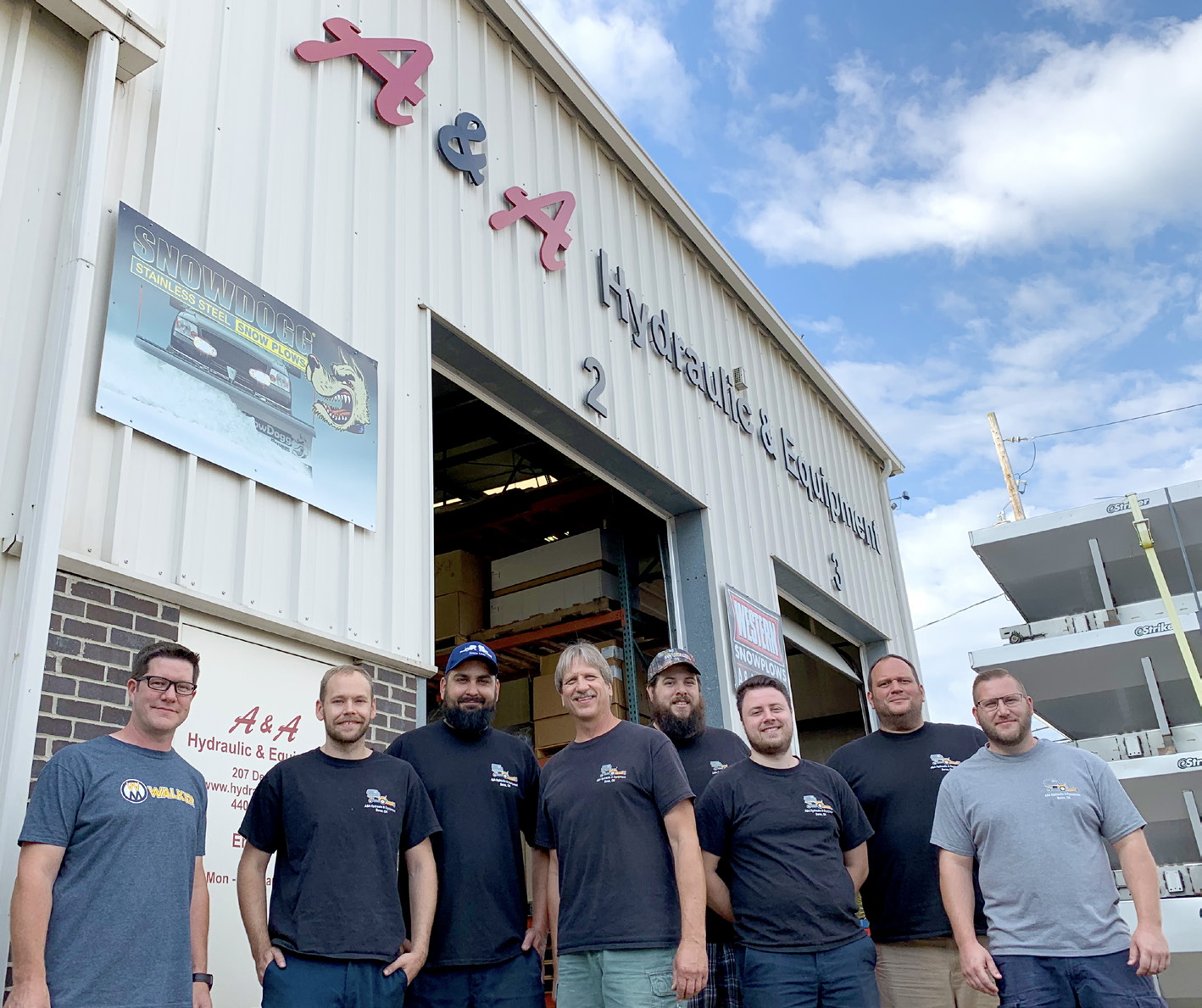 It’s in His Blood

Spend a few minutes with Dan McGivern of A&A Hydraulic and Equipment in Berea, Ohio, to learn about his business, and a couple of things become evident really fast: 1) This guy has drive in his DNA, and 2) Quality is at the top of the list of reasons for his success.

To learn the story of A&A Hydraulic, you have to go back to Dan’s dad, Bernard N, in the mid-60’s as he worked for a company named Ohio Hydraulic Jack Service Co., fixing and servicing American-made hydraulic jacks in the Cleveland area. The steel mills in the area were thriving, so the demand was high and service was king, and for a person who wanted to take the risk on his own business, it appeared that this would be a great opportunity. So Bernard ventured out and started his own repair business in his garage. Even now, Dan chuckles at how his dad worked so hard to impress his customers, leading many of them to believe that the man who sold the services was his twin when he would go pick up the equipment for service and repair, even though he was just a one-man show. 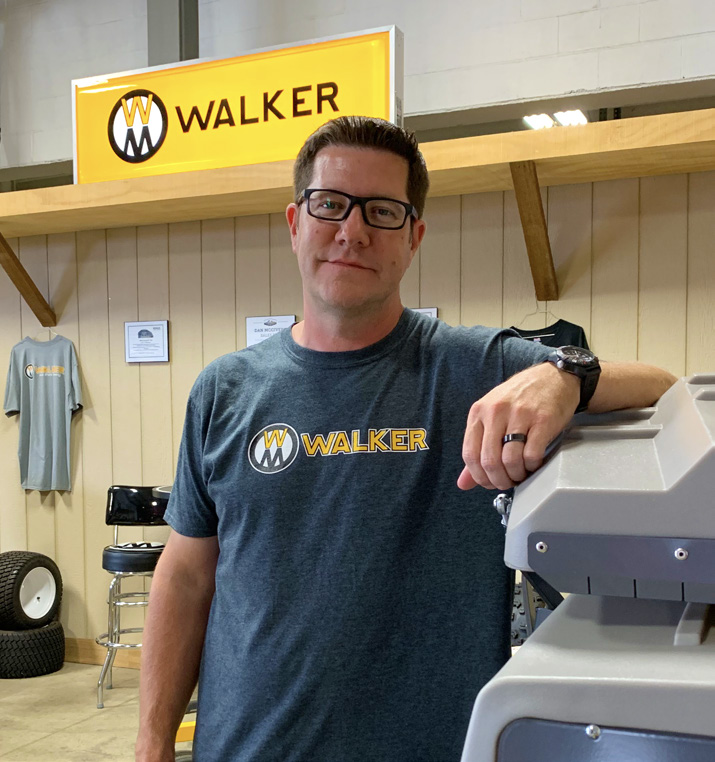 As the business was growing, Dan says the relationships his dad made with employees were key. “We have a guy at our Brook Park location who has been with us longer than I have been alive,” Dan shares, “Funny story, my dad used to pick him up after vocational school and that’s how he started.”

Dan says his time hanging around the shop during spring and summer breaks really gave him a better understanding of not only the mechanical side, but also how a service business can be useful to its customers. Dan says that his dad’s style was to allow him to learn by trying different things. He credits his dad with seeing the drive he had to learn and succeed in a way that would suit him best. “School was not for me,” explains Dan. “Even in high school I would look at my teachers and think; ‘Next year I will make more money than you will,’ but it was because I was driven to be successful and interested in earning a living on my own. I love to work.”

In 1992, after high school, Dan found a unique opportunity, as new regulations required that all freon for air conditioning servicing had to be contained and not released into the atmosphere. Enter the air conditioning service unit that was being required at all servicing centers. “In 1992, I got the opportunity to take on the Robinair product line,” recalls Dan, “and it was a booming business overnight.” He explains that an early start in this new industry really gave him an advantage as the industry matured. “I got set up with a van, loaded up with parts and just went at it,” explains McGivern. He had a 120-mile radius territory and was also part of the second class that went through training. “Getting in on the ground floor of the industry really provided a lot of opportunity,” he recalls.

Even more opportunity came in 1994, when Dan realized that rebuilding the vacuum pumps inside the service units could also be a sustainable business, so he made an arrangement with Robinair to be the exclusive rebuild center for all of their customers in a 19-state area. “We had customers in automotive, HVAC and refrigeration trades all coming to us to have vacuum pumps rebuilt,” says Dan. “It was steady work from sunup to sundown.”

Dan says it was around this time when he realized he needed to hire good people to hand-off the rebuilds and be able to work on the business. With 1,500 pumps being repaired each year, and an additional service to repair core exchanges, he says it was getting overwhelming and hiring and training the right people was the best thing he did. “It was difficult for me to get off the workbench and trust people to do repairs the way I wanted them done,” explains Dan, “but doing that made the business so much more successful, and I learned the value of talented employees.”

It was full steam ahead for both Dan and his dad as they both were doing what they did best and making a good living at doing what they knew how to do. Then, in 2000, Bernard N began to talk about retiring and the idea of bringing both parts of the business under one roof at a location in Brook Park. Dan says it worked out well, because the people who were coming in for hydraulic repairs, were also asking if A&A was selling snowplows, so he soon realized that the opportunity to sell product was as good as servicing. He says it was also a great way to keep employees busy all year long.

In the early 2000’s, A&A took on the Hiniker and SnowDogg plow lines and built a reasonably good following with their service. Another thing that set A&A apart early on was how they went about installing plows. “We soldered every connection, heat shrinked, used dielectric grease on all plugs, and made sure nothing was going to come apart when the plows were being used,” explains Dan, “That experience early on really established our shop as the go-to place for plows.”

As everything was going well, the folks from Western Snow Plows came in to see Dan in September 2014 and asked if A&A would take on Western plows. Dan laughs at the timing, but says it was a great move. “It was a busy year,” explains Dan, “but it was good for us to prove that we could take on the volume and keep up good quality.” McGivern says his employees excelled during that time, and many of their hydraulic repair customers took immediate notice that they were selling Western plows.

McGivern says they had been establishing a rhythm with the snow plows when he noticed that some landscapers began to inquire about mowers. As they opened the Berea location in 2015, Dan says he began to audit customers about their favorite brand of commercial mowers, and he says most conversations led to Walker. In 2017, Dan approached the area distributor (Emmett Equipment Company) about the idea of taking on the line. He says his interaction with Brian Rogerson, the general manager at Emmett, was great from the start, and they began interacting like they had been friends for years.

In mid-2017, A&A took on the Walker line and they have not looked back since. Sales in 2017 were four machines, 2018 brought about another six sales, and to date in 2019 they have sold 14 mowers. Dan says it is good progress for them, but he is driven to do at least double that number on a regular basis. He says he is hoping to get over 20 units in 2019 with fall and end-of-year sales. 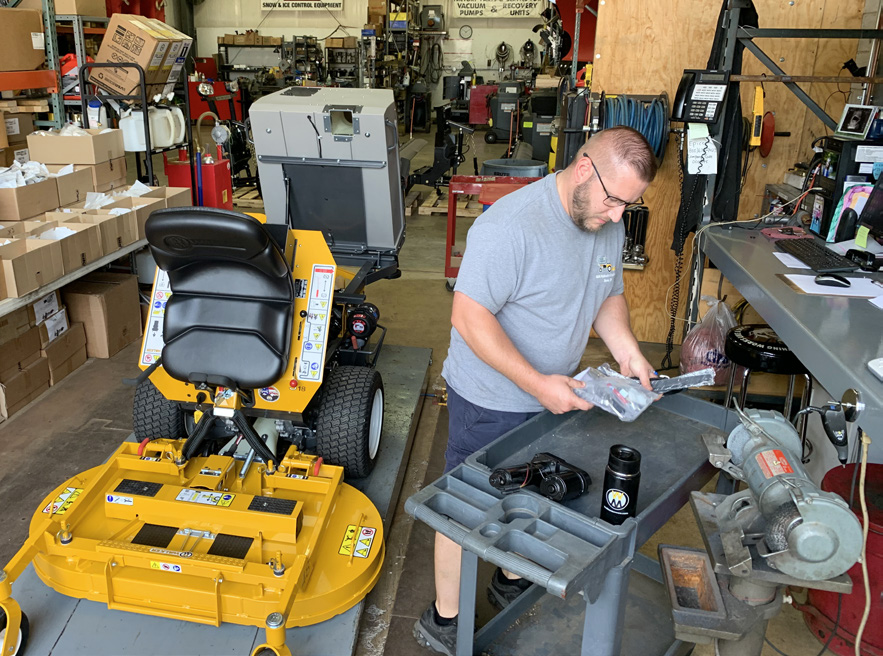 When asked how he has become successful with Walker in such a short time, Dan starts his list with the Walker Factory Out Front Advantage Sales Training that he attended this past summer. “That training was like no other training I have been a part of,” he says, as he motions toward a wall of certifications for a variety of companies, “and we have been to a lot of trainings.” He then mentions Walker’s Showroom Enhancement Program as a great way he was able to display Walkers and make his showroom look like a real Walker showroom. “For us, the three-way split of the Walker showroom program made it very easy to say yes—we jumped at it when Brian Rogerson explained it to us.” An additional reason he mentions is the support he has received from Emmett Equipment. He says being able to work a few shows and do demos with the Emmett team and watching how they interact with customers has been valuable. He quickly adds that Emmett Equipment has been really good at supplying equipment and parts, so his team can concentrate on selling and servicing.

Dan says the A&A story is not complete without a clear recognition of the high quality employees they have been able to hire at both locations. He says many of the 18 employees at A&A have been around over 10 years. He says the quality they bring to work every day, no matter what part of the business they are working in, is exceptional. He proudly circles back to the high level of training his team has taken on various types of repairs, including air conditioning service units, hydraulic pumps and cylinders of all types, battery powered crimping tools, snow plows and now engines and mowers. He adds that the versatility of his team to be experts on so many products makes A&A both unique and valuable for their customers.