How to Zero in on a Moving Target

To be content in lawn maintenance today is to be putting your bid in for early retirement. Because as unique as the lawn maintenance business is, it has one thing in common with all other ventures. Change is inevitable, change is constant.

Being on the cutting edge of change has helped Frank Carson develop his business into one of the largest lawn maintenance/landscape companies in the Sacramento area. Although Frank is tight-lipped about exactly how big his company is, Carson Landscape Industries has 90 employees and maintains 120 commercial sites. Crews have a high profile in and around Sacramento, and Frank himself enjoys a reputation as a truly successful self made businessman.

There have been at least three turning points in the evolution of Carson Landscape industries. The first was the day Frank hung his shingle. The second came four years later when he changed gears to service a growing commercial/renovation market. The third is a more recent change of direction to accommodate a new construction market.

Frank entered the lawn maintenance business in 1975 after attempts to gain a foothold selling real estate had failed. His start was modest. He bought a mower and edger, and with one pull of a starter recoil was in business with two residential accounts. Four years later, the number had mushroomed to 100 residential accounts.

In 1980, Frank took his brother, Larry, in as a partner, and together they assembled an aggressive plan that by 1985 grew the business to 80 employees.

The plan had two main elements, Frank remembers. "We wanted to get away from residential accounts because at our size it was difficult to maintain them profitably. We also noticed that installation contractors just weren't interested in renovation or maintenance. So our plan focused on renovating and maintaining commercial accounts."

Over the five-year period from 1980 to 1985, Carson Landscape renovated more than 50 apartments and 25 medical complexes in Sacramento. Maintenance contracts naturally followed.

The fit was perfect. Carson didn't do installations. Installers didn't do renovation/maintenance. And, more importantly, the building market was at a standstill.

Change was imminent, however. Competitors began beating down Carson customers' doors. Unfortunately for competition, their timing was as bad as Carson's had been good a few years earlier. New tax regulations in '86 and '87 removed any tax incentive to renovate. Carson, too, witnessed a substantial decline in the renovation business.

"We were forced to do two things," remarks Frank. "We had to become even more quality minded if we were to retain old customers, and we had to change our focus to do more installations."

They did both very successfully. During the transition period - when competition was high and demand for maintenance and renovation was low - Carson retained close to 80 percent of its older customers. And a new installation division took advantage of a building boom. In fact, between 1989 and '91, Carson's crews installed 500 new front yards for developers of single-family homes. Not bad for a company that a few years earlier had given up on the residential market and had no plans for the installation market.

"We were still renovating properties, but on a select basis only," Frank notes. "Unfortunately, we weren't doing the selecting."

The roller coaster ride during the '80s taught Frank a lesson about the lawn maintenance business. First and foremost, he says, "If you're not flexible enough to change when change is needed, you will be passed by." Carson learned to adapt, to the extent the company today is positioned as a full service company ready and waiting to serve all aspects of the lawn maintenance/landscape market.

A fluctuating market also forced Frank to look for more ways to keep costs down. At times, he relates, that meant buying new equipment when buying anything was difficult.

That attitude led him to Walker Manufacturing in the spring of 1989 when Carson Landscape Industries purchased its first Walker mower. Frank says they were looking for a more maneuverable rider that would save on labor costs and give them an excellent cut. Today, they have nine Walkers and each gives them 42 inches of "excellent cut." The mowers not only cut down on labor costs, they reduce maintenance costs, too, notes

Carson vice president of transportation and service Casey McQuiddy. "We look for each Walker to give us at least 2,000 hours of service out of their 16-hp Kohler engines. We repower and look for 2, 000 hours more.

"We haven't had a major problem with a unit, and normal repairs are facilitated by excellent parts availability."

Two years after its first Walker, Carson started to revamp its truck fleet. "All of our trucks and trailers were 10 to 14 years old," Frank relates. "We had to buy new ones or find another approach to hauling around equipment." The company opted for Isuzu trucks and chassis and custom made beds. The end result was a more efficient transportation and storage operation.

The Walker mowers and the new trucks were all part of a philosophy to reduce costs by becoming more efficient. That same philosophy spilled into other areas of the company, as well. Carson, for example, employs a computerized maintenance program that keeps tabs on how much money the company is spending on equipment and repairs. Broken down by individual units, the program spots problem machines and/or problem crews.

Operations are efficiently run, too. A glance at the operations board tells part of that story. The board "legends" crew makeup. Trucks are yellow and Walkers are blue. A black dot means a crew is equipped with a phone. A red dot means radio. Green means beeper. The board also includes the license number of each vehicle and the name of the driver. 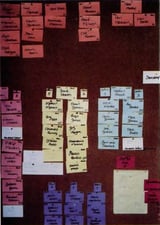 There's no question where crew members belong in the morning since 3" x 5" cards spell that out in living color.

Frank wants to ensure all of his employees have job security. Hence the reason to pursue one additional goal with vigor, to raise the image of the industry. It annoys him to no end to see contractors whose only goal is to get the job. "The job, any job is a means to an end. It's not a goal in itself." Frank notes. "To get a job for job sake depresses prices, lowers the image of contractors and all in all hurts the industry."

It's not easy, he admits, since getting the job was top priority when he launched his own career. Yet he learned that to stay in business meant looking beyond the job. Among other things, it meant having the vision and flexibility to change when change is required.