Take exit 90 off Interstate 65 in Indiana and turn left twice and you'll be on the doorstep of Reynolds Landscape Maintenance. Located in Franklin, Indiana, approximately 20 miles south of Indianapolis, Reynolds maintains 78 residential properties in and around Franklin and mows 80 acres of industrial turf. The company started mowing lawns better than 20 years ago, before, in the words of owner Dave Reynolds, it "became fashionable to be in the maintenance business." 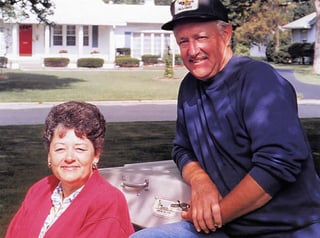 Reynolds is a full-service landscape/maintenance company that offers customers a complete menu of services, including mowing and maintenance, fertilization and plant and hardscape installation. On this cool spring morning, a few days before the running of the Indianapolis 500, Dave and his crews learn they'll be without an employee.

So Dave's wife Carolyn pitches in. "She still enjoys mowing, and she won't mind helping out this morning," Dave relates.

With that, Reynolds' residential crew takes to the field. On the way, Dave admits that being fashionable doesn't define his way of doing business. Not to say he's out of step. He just does things his way. His way, he explains, is measuring growth by profit margin, not by number of accounts. Experience is a great teacher.

In its heyday, Reynolds employed 25 people and mowed as far north as Indianapolis. The majority of its accounts now are within a couple mile radius, and the company only has four full-time employees. Yet it is far more profitable than it was during the "bigger days." Last year, Reynolds recorded its best year ever, operating at a 24 percent profit margin.

After a short drive, the pickup and trailer pull into a high-end residential community where the crew will maintain more than a dozen yards, each with an average of 12,000 to 15,000 square feet of lawn to mow. Carolyn and Dave Pridemore, a four-year Reynolds employee, start mowing, while Dave offers a brief history of his company.

Reynolds Landscape is located on the 160-acre family farm. The house in which Dave was born is little over a stone's throw away. His daughter and her family live there now. Dave built all of the buildings on his homestead. The vegetable gardens that ring the buildings and a camper that appears ready to go at  a moment's notice give away Dave's two hobbies, gardening and "picking and a grinning" at bluegrass festivals.

His first job - not counting milking cows and doing other farm chores - was for Arvin Industries in Franklin and later he spent three years with Chrysler where he was ground traffic manager for the company's Mopar Division. When the plant closed and Dave was offered a job in another part of the country, he decided to stay put. Not that there was ever any question about leaving.

In 1972, Dave and Carolyn formed a partnership with another couple and opened up a garden center/landscaping operation. The economic downturn in the later '70s, however, caused a slowdown for the business. Dave and Carolyn eventually left the partnership and pursued the maintenance business which was relatively unaffected by the crunch.

The couple went full throttle into mowing and maintenance, picking up accounts in Indianapolis where they had been doing some landscaping. At one time, notes Dave, four crews drove 60 miles round trip daily to the city. Gradually, but persistently, they drew the business closer to home, and changed its focus from the apartment complexes they were doing to a combination of the commercial and residential mix they now have.

It was just prior to the transition in the early 1980s when Dave saw his first Walker. As he tells it, "I bought the first Walker I saw." What he doesn't usually tell is the fact he bought it for Carolyn to mow their yard at home. He didn't think the mower could compete with his large area riders and intermediate walkers. Using the Walker around home gave him other thoughts, so, in his words he began "sneaking the mower out on jobs."

The mower became a mainstay on the crew and really helped change the direction of the business. Dave - with Carolyn working right along beside of him on her Walker - focused on older residential homes in the area. They were ideal properties for the Walker, Dave explains. Yet this first Walker was more than a helper, it was an advertisement. "Customers' neighbors would see the mower and want me to use it on their lawns," he adds. 'The mower helped set me apart from competition, and still today, there is no one out there in our area really competing with me and my Walkers." He puts it rather succinctly when he says, "If I didn't have or could not get Walker mowers, I would not mow residential."

Carolyn pulls around to empty the catcher. Dave points to her mower, the newest of his Walkers, and says with pride, "For its first 1,463 hours we spent only $6 on repairs."

To be sure, Dave is extremely vigilant about preventive maintenance and all of his equipment receives excellent care. Yet he says he still has reason to boast about that figure as well as other features such as ease of operation, durability and the mower's ability to collect grass. Each of his three mowers is equipped with a grass-handling system and a 42-inch deck.

When asked about the economics of collecting clippings today, he says he doesn't subscribe to the theory they are better left on the lawn. "If customers can afford to have their lawns mowed by a contractor, they can afford the one application of fertilizer leaving clippings behind will return in nutrient value." He's also amazed by the amount of debris his mowers pick up. “There's more than grass in the collection system," tells Dave. “There's twigs, cigarette butts, and the remnants of paper bags, etc., all of which when left behind make a lawn look less attractive."

It helps to have a place to dispose of clippings. Dave dumps his right at the farm. He lets them compost and uses them later in his gardens and for plant installation projects. 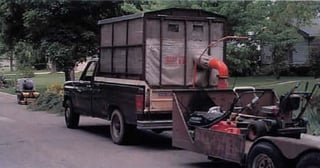 As the Reynolds' crew "click off" the yards, Dave picks up a string trimmer and quickly applies a finishing touch. "There's not much of this work when you use a Walker," he relates.

Although he credits his mowers for much of his success, Dave knows that it takes more than a mower to make a business grow.

In this business, success hinges in large part on the ability to identify a niche. Despite having an "industrial crew," Dave feels his niche is not in that "competitive" market where, he laments, jobs are won or lost not on mowing performance but instead on bid performance. He likes residential properties, generally speaking, because customers actually see and fully appreciate the work his crews do. He prefers older, established communities where customers are not continuously selling their homes and moving on.

In fact, close to 30 percent of Reynolds' residential customers are retirees. Nearly all of them take an active interest in how and what Dave's crews are doing.

For some maintenance contractors, that would be a liability, but not for Reynolds. Besides enjoying gardening, bluegrass jam sessions are an indicator that Dave would also enjoy getting to know people and their landscape needs.

Before he picks up his trimmer again, Dave tells how being a contractor today differs from the way it used to be. In fact, he credits his best year - last year - to management skills gained over several years' experience. That includes the purchase of Clip software which reduced his billing time from three to four nights each month to one hour and having a good core of employees whose collective experience with Reynolds adds up to 24 years.

"Without good people, you can't make it in this business," he emphasizes. Just then, Carolyn gets Dave's attention and points down the road, "Here comes Bill."

It turns out that Bill is one of Reynolds' retiree customers. He can't stand the thought of having an invoice in his mailbox, so each week he seeks out Reynolds' crew and pays cash for the mowing job to be done later that week.

"I really enjoy these people," remarks Dave. "Every week, every day is a little bit different. Yet it's so close to being the same it inspires a high comfort level."

Keeping lawns properly maintained is half the battle, he adds. His customers have come to expect the manicured look his crews deliver. The other half is keeping customers happy. To that extent, Reynolds crews go the extra mile. Maybe it's taking trash cans back to the house on trash removal day, or stopping the mower to remove an unsightly weed or two. Every little bit helps to separate your crew from others on the street.

The small crew gathers for an impromptu strategy session. They've already mowed and trimmed five homes. After they clean up the clippings, they'll move the rig to the next street over and mow another 11 properties.

"We're making good time, today," tells Dave. "When properties are close like this, we could do 25 a day.

"I want to do this full time for another five years. Then maybe gradually back it down to three days a week, filling the time in between with a few more festivals and more gardening.

"I don't miss corporate America. I wish everybody could enjoy their work as much as I do!"