Maine Contractor Does “Whatever It Takes”

It’s a hot morning in Rockport, Maine. The mowing crews anticipate the heat as they discuss the day’s activity with Tom Farley. Tom is the vice president of Farley & Son Landscaping, and every Wednesday he meets with his six mowing crews.

The discussion this morning is wide-ranging. “When are the new diesel Walker Mowers coming in?” one crew leader asks. Another inquires about the type of deck adjustment on the new mowers, while another wants to know how the new machines will perform in wet grass. “They have a lot of torque,” Tom says. “So they should do very well in all conditions.”

He reminds his crew leaders to check the oil level in the hydros, but not to add any oil. “Yellow slip the mower if it needs oil,” Tom notes. “Then leave it with a mechanic downstairs. And remember, when you drop off a machine for repairs, make sure to clean it up ahead of time. Our mechanics don’t like to work on dirty, grass-filled machines.”

The meeting eventually adjourns after crews talk about special customer requests, new projects and new people. If the gathering sounds unusual, it is because Farley & Son is a bit unusual. Founded in 1974 by Tom’s father, Dave, the company generates more than $10 million in revenue annually—$7 million in design/build and maintenance, and $3 million from Hoboken Gardens, its nursery/garden center operation. 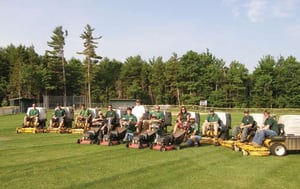 Having 16 Walker Mowers is rather unusual, too. The company purchased its first Walker in 1995. Today, its equipment lineup includes one diesel (with three more on the way), three 26-hp models, and a boatload of 25- hp models, all equipped with 48-inch GHS decks.

“We’re trying the diesels because they have more torque and longer running time than gas models,” Tom emphasizes. “We already get upwards of 2,500 hours on our gas models, but should be able to at least double that with the diesels.”

Tom joined the business fulltime in the mid-1980s after receiving an Ag Engineering degree from the University of Maine. He has two sisters who share an integral part of the business, Michelle Lemar-Heald and Gretchen Richards. Gretchen’s husband, Sean, is also a supervisor for the company. Tom’s mother, Carole, worked alongside Dave as the bookkeeper during the early years and also managed Hoboken Gardens until recently. Tom’s wife, Lisa, is involved, too, now managing Hoboken. There are other family members, as well, which means that Farley & Son has more than one reason to grow and stay healthy. 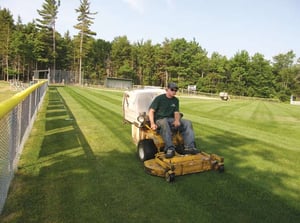 After the meetings, the four Walker and two Toro push mower crews gather at a nearby ball diamond for a photo shoot and some mowing. Tom accompanies the group. He explains that the design/build and maintenance company has around 300 customers, with revenue split nearly evenly between design/build and maintenance. Included in the maintenance is snow removal. The company retains approximately 60 of its employees (nearly half, full-time) and an additional 20 or so part-time during the winter to operate the sizeable snow operation.

“Our business may look a bit unusual, but everything has a purpose,” Tom relates. “We purchased the nursery business in 1988 to support our installation work. We built cabins up north because we had extra help here during the cold winter months. The excess labor also helped us earn the reputation of being able to complete larger design/build jobs in a shorter time frame than most companies. The snow business allows us to keep key employees on year-round, not to mention the fact that our customers want that service.”

The Farley & Son business model calls for translating design/build work into full-service maintenance accounts. Many of these accounts are the highend residential type owned by vacationers who literally want everything on the exterior maintained. In a few instances, the company even responds to house alarms when owners are not present.

“We pride ourselves in delivering full service, whatever it takes,” Tom emphasizes. A glance at the company’s Daily Crew & Equipment list tells part of the story. Thirty-four crews specialize in everything from arbor care, masonry and carpentry to installation, earthwork and irrigation maintenance. A specialized crew can even install inground swimming pools if a customer so desires. 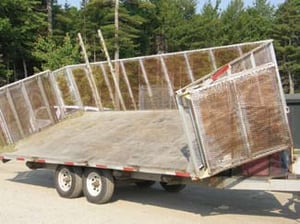 The list includes the six maintenance crews that mow upwards of 700 hours of turf a week. The four Walker crews come equipped with custombuilt dump trailers that each hold and dump 30 yards of grass. Veteran mow crew supervisor Jamin Keith demonstrates how they work. He simply folds back an entire side of the trailer and actuates a motor to tip the trailer. The operation makes quick work of leaves and debris.

“We have another trailer on order for delivery this fall,” adds Keith, who has been with Farley & Son for nine years. The Walker Mowers and trailers make a good mow team, he emphasizes. “The Walkers are all-around good machines. They produce great lines and they are stable on hills.”

When asked what Tom meant this morning when he said that the Walker is the only rider that delivers a walkmower cut, Keith replies, “The gearbox allows the deck blades to overlap, which means there is no strip of uncut grass between blades. The GHS also has tremendous suction which literally vacuums the turf. Our customers truly like the manicured look.”

Unlike some companies that claim mowing maintenance is more of a cash flow generator than profit maker, Farley & Son looks to be profitable in all its divisions. “The key in maintenance and other services is that you need to know your costs,” says Tom. “Our business is a little complicated because of all the moving parts, but we have a full-time IT person on board who has developed several custom reports that help us track costs.

“We don’t know precisely how profitable our mowing business is because we fold mowing into a full-service package for customers and budget it out over 12 equal payments for them,” Tom continues. “Still, I can tell you how much it costs to operate our Walker Mowers. Figuring in fuel, maintenance and a reserve to purchase a new mower, our Walkers cost somewhere between $9 and $10 an hour to operate. That number doesn’t include labor or our general overhead. Add in those numbers and it’s easy to see why some operators lose money in maintenance; they just don’t know their costs.”

Tom points to a couple of other reasons why there’s money in maintenance. First, he empowers his employees to make decisions. His crew leaders, for example, help decide which mowers the company buys. Then, they also do most of their own scheduling, which is made easier by a host of new technologies, including work order reports, real-time GPS, and cell phones that all employees have.

“Our maintenance crews are efficient, operate the equipment they want to operate, and have taken ownership of their jobs,” Tom emphasizes. “This all makes a difference. We assign Walker Mowers to operators, too, making them accountable for their operation and maintenance.” 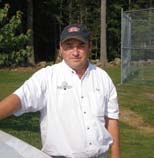 Tom glances at his cell phone (which, by the way, rings constantly) and then his computer. He says categorically, “These tools have made my life easier and allow me to keep my finger on the business pulse.”

And pulse there is. Crews are not the only ones working hard in the near record June heat wave. Receptionist Jessica Brewer, always smiling, juggles interviewing a new job candidate and entering company data around answering the phone. Michelle has her hands full, too, entering time cards, doing payroll and handling other human resource responsibilities. Gretchen, who manages the maintenance division, had just left the office to visit a new account. Bethany Fields handles accounts receivables for both the landscape business and nursery division, along with customer correspondence, amongst many other duties within the office. Missing from the office today was Mike Ames, who co-manages the maintenance division with Gretchen and, until this year, managed the mow crews, but was unavailable for comments as he was reviewing a current site with a high-end commercial client.

“Right now, we’re still working pretty hard because of the late spring,” Tom adds. “Normally, we would be slowing down by the Fourth of July. This year, though, we lost about six weeks of cleanup time due to the late winter and have been playing catch up ever since.”

Yet he takes it in stride. After 30 years, the company catchword for customers and employees alike is “Quality Matters,” and Farley & Son will do “What it takes” to deliver.