F or 10 years, Perry Smith sold golf and turf equipment for a John Deere dealer. During that time, he became familiar with lawn maintenance equipment and with some of the most knowledgeable turf people in the industry — golf course superintendents. The combination was overpowering for this aspiring entrepreneur.

Despite the fact that he had a good career, and with wife Robin of 25 years, two daughters, one in college, three years ago Smith bought a mower and trailer, and started mowing lawns. He kept his “day job” the first year, until he discovered he could bring in the same amount of money mowing as he could selling equipment, minus commission.

So, the following year, he quit his job, hung his shingle and formed Stonebridge Landscaping Lawn Services in Greenville, South Carolina.

By the end of his first “official” year in business, the young company had generated in the neighborhood of $100,000 in mowing and maintenance business. When Smith closes the books on his third year, the business will have grown by an astounding 500%. In simple terms, the career change was a near instant success, especially for someone who enjoyed driving the equipment as much as he enjoyed selling it. Furthermore, Smith was still able to employ his natural sales skills, this time selling services to high-end residential and commercial accounts instead of equipment to golf courses. 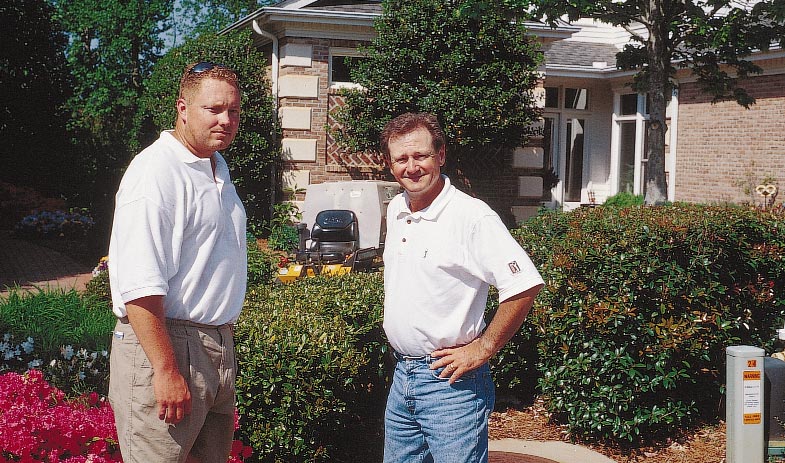 Smith didn’t start his business like so many younger entrepreneurs before him had. He lived in the area since 1969 and knew a lot of people, including many local developers. In addition, through his work in the equipment business, he became friends with several owners of lawn maintenance companies. When it came time to outfit his trailer, he asked them what kind of equipment to buy. Oh, there’s plenty of green on his trailer, including a John Deere walk-behind and intermediate mower. But the heart of his operation is a 25-hp GHS Walker with a 48-inch deck.

“I did my homework,” tells Smith. “I went to the people in this business and asked them what kind of equipment they used. They steered me toward a Walker. At about the same time, I read Bob Walker’s column in Walker Talk about finding your best opportunity. It was a vote of confidence for me.” So, with the right amount of confidence, both on and off the trailer, Smith forged ahead.

His business grew leaps and bounds by word of mouth, only. He has never advertised, and lets his work do most of the talking for him. Among his customers today are 12 high-end residential accounts, six large commercial accounts and a number of condominiums, retirement centers and upscale town homes. Seems like an enormous amount of work for an owner/operator? 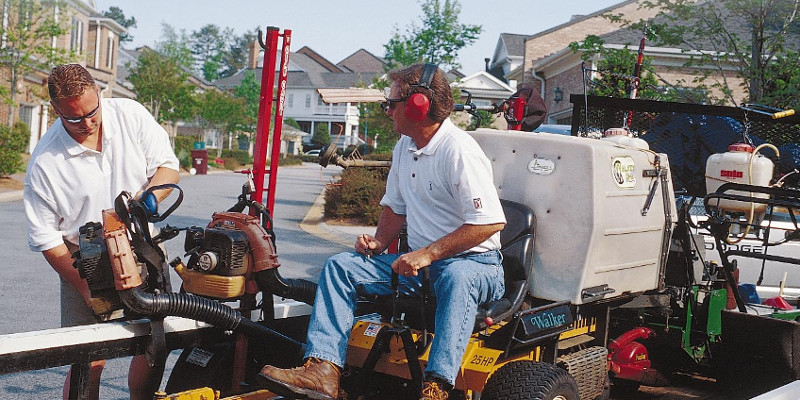 “For our type of operation and properties, there is no machine on the market that will do what our Walker does,” Smith relates, explaining how he can accomplish so much with a one-crew operation. “We collect grass on all our properties, and the rear-discharge design allows us to trim with ease. In fact, I believe the mower has saved me one individual and another piece of equipment. It has streamlined an already streamlined operation.”

This year, he also hired a former golf course superintendent, Chris Thompson, to work in the business with him. Together, the two do most of the work, calling on “temporary” help during peak times only, e.g., spring and fall cleanup.

“The workload here is significantly different from working at a golf course,” admits Thompson, “although many of the tasks are the same. When I worked as a course superintendent, I had 30 people working for me. But one wrong move from any of them could cost you your job. Here, you’re more in control of your destiny, and it’s just more relaxing.” 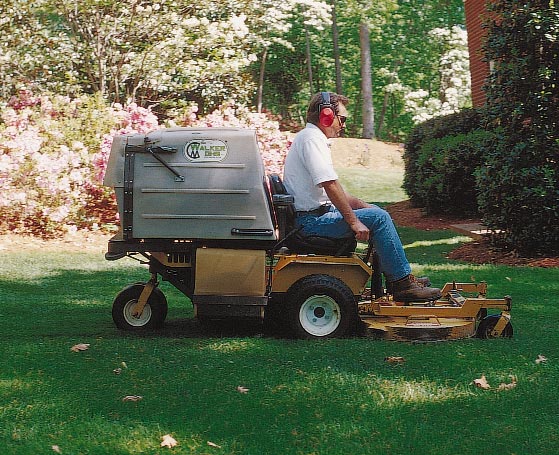 Not to say the work isn’t challenging. “This is a people business,”Thompson adds.“Many of our customers are retired, and look to us for other services in addition to mowing and maintaining their properties. I find myself changing light bulbs and doing a lot of different things not spelled out in our contract. We even spend more time than one would guess just talking with our customers. But it comes with the territory.”

Smith agrees, “I haven’t been in this business very long, but I know that being competitive requires out-servicing my competition. We all have access to the same body of knowledge, the same type of equipment and similar marketing strategies. What distinguishes one service provider from another is … SERVICE. If we can provide exemplary service, then we can successfully compete.”

Having a “service plus” attitude is a perfect fit for Stonebridge customers, who have high expectations anyway. As Smith explains, both the highend commercial and residential markets may be harder to break into than other markets. But once you get there, and perform, they are generally a little more secure. In fact, his company hasn’t lost an account yet. But the owner/operator isn’t resting on his laurels.

“One thing I learned in my previous career is the importance of communicating with your customers,”Smith tells. “John Deere, for example, has some of the best development engineers in the world. The reason? They have a customer feedback system in place that’s second to none. Before they design and manufacture a product, they talk with their customers.

“As a lawn maintenance professional, I do the same. Instead of performing the same service over and over again without getting feedback from customers, I talk with them on a regular basis to find out if the type and level of service we’re providing is what they want.” It’s all part of the service picture and retaining satisfied customers, he emphasizes.

Of course, this entrepreneur has a slight advantage over his northern counterparts. In most instances, he is in contact with his customers yearround. The mowing season begins by the middle of March, and re-seeding and leaf cleanup carries the season through until after the first of the year. 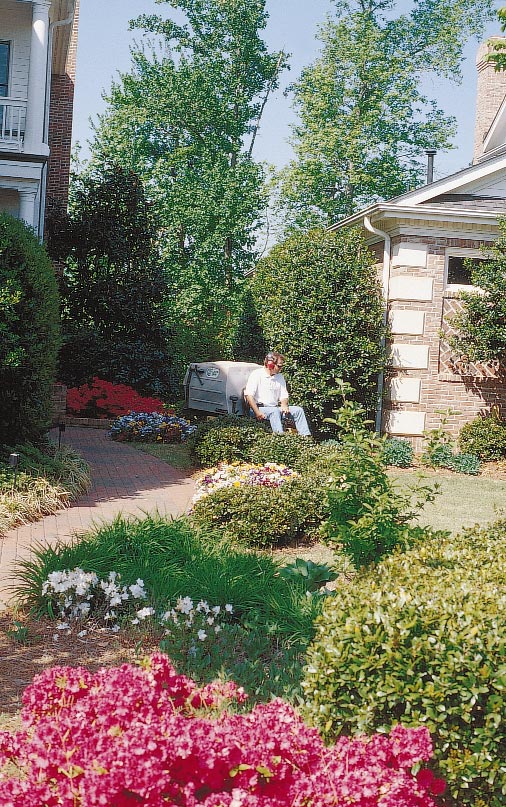 With a 2% unemployment rate, Greenville isn’t the place to go searching for employees. Yet, with construction up and people continually moving into the area, landscape contractors such as Stonebridge need all the help they can get. Caught between the proverbial rock and hard place, Smith is looking for ways to grow without spreading himself too thin.

In addition to Thompson, he looks to sister-in-law Shannon Sudderth and brother-in-law Jim Sudderth for ideas. Shannon manages the business, and Jim acts as his financial advisor.

“My team will take us to the next level,” Smith says confidently, although getting too big is not part of his plan. “I’m thinking about another Walker right now, which would give us an opportunity to start a second crew that Chris will manage.The area is growing and we’re growing with it. But we’re going to grow slowly and make sure relationships don’t suffer. After all, this is a business of relationships, and building and keeping new ones is the fun part.”