There's more to mowing lawns than meets the eye. If you don't think so, just sit down for a day and talk with the Corbetts, Craig and Natalie. Owners of Mowin' Ranger, Tremonton, Utah, this husband and wife team has been mowing lawns since the early '80s. Like so many lawn maintenance companies, where they are today and where they came from is as different as night and day. The Corbetts, however, are unique in terms of how they made the trip. 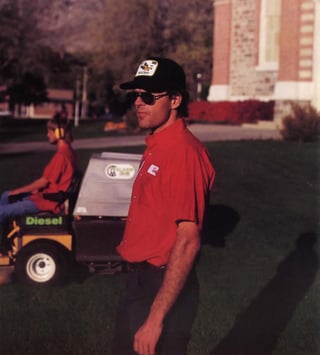 To put it in perspective, Mowin' Ranger today is a full-service mowing/maintenance company. As Craig remarks, in a town the size of Tremonton, with a population of 3,500, mowing companies have to do more than mow. Mowin' Ranger crews travel in a 45-mile radius to maintain more than 400 fertilizer accounts, 75 lawn mowing accounts, 30 shrub and tree accounts and over 300 what the Corbetts refer to as miscellaneous accounts, those that require aerating and renovation services, even weed chopping. The Corbetts accomplish this with two mowing crews, two miscellaneous crews, two fertilizer crews, one tree trimming crew and, during the busy season, two full time employees and 13 part-timers.

Craig and Natalie also recently purchased a 90- acre tract of land just outside the city limits. Plans call for the development of a composting site, among other things, including an apple orchard and possibly an RV park - not to mention a new home for the Corbetts and their three children.

The Corbetts' story begins in 1981 when Craig was laid off from a construction job. He went to work at a local factory and supplemented his income by mowing lawns. Craig's dad owned a lawn mower repair shop and sold him an old walk-behind. Mowin' Ranger was off and walking, literally and figuratively.

"We were pretty destitute then," tells Craig. "When our first customer paid us $10 to mow her lawn, I took the money and bought a gas can and filled it with gas."

But Craig and Natalie "plugged away," with Craig working at the factory and Natalie helping to run the business and raising a family. They eventually built their customer rolls up to 35 lawns a week, using four 21-inch walk-behind mowers. During the busy season, they employed three, maybe four high school students, with even more coming on board as the number of lawns grew.

Hard work, however, was not enough. After their two youngest children were diagnosed with a rare syndrome, medical bills mounted... and the Corbetts needed to make more money. As Craig tells it today, they've learned one thing from their years of experience and from necessity, how to make money. "We were walking ourself out of business," he explained. "We just couldn't cover enough ground to meet expenses and to pay our medical bills. ln fact, we were told to go bankrupt, but that wasn't an option." 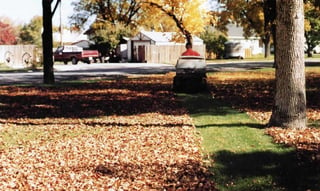 The solution appeared in a Flower & Garden magazine ad. Craig sent away for a free video. Halfway through the video he knew he wanted the mower. The machine happened to be a Walker. He bought a demo model sight unseen for around $5,000, and saved enough that first season in labor and gas to pay for the new unit.

The rest is history, sort of... Craig truly believes the new mower saved his business. If nothing else, he notes, "It taught us how to make money mowing."

Employee costs went down and productivity went up, giving Mowin' Ranger the time and money to expand. In 1989, two years after purchasing their first rider, Craig branched out into the fertilizer application business. Natalie, who was working with the mowing crews at the time, found that employees now had extra time on jobs to do the little things that count, such as providing additional grooming services. "Crews really started to make us money," she tells.

Not ones to be greedy, Craig and Natalie began to share their profits with employees. They even set up a special bonus program, charting the time it takes to do maintenance accounts. When employees beat the charted time, they earn an extra 50 cents an hour.

To borrow a well-worn cliche, the Corbetts learned that time was indeed money. People started to say their crews looked like Indy pit crews, they worked so fast.

One Walker led to another, until today Mowin' Ranger crews employ four models, including their original 11-hp model, two-16-hp models and their newest addition, the Model D.

Two crews go out with two Walkers each. Crews use a 54-inch side-discharge deck for wide areas; a 42-inch collection deck and a 42-inch mulching deck are used primarily on residential accounts. To ensure no time is wasted, crews carry an extra deck to match mowing conditions or application and an extra set of blades comes along too. "We strive to change blades every four hours," tells Craig. "Sharp blades really make the difference between a lawn that looks good and one that looks great."

Craig makes sure all crew members know how to sharpen their own blades. The ritual is done after crews come in from the day's work. "Employees generally work faster at night," he says with a slight grin. And it saves time in the morning so crews can get up and running. In fact, they figure that evening sharpening saves up to one hour per crew.

Saving time is really the key to this business, tells Craig. His new riders help do just that in areas other than mowing, too. Take leaf collection as an example. Craig says he has never seen a mower or a vacuum for that matter that does the job his riders do. During the leaf season, the mower operator dumps the leaves into a tarp. A tag team of two employees literally runs the leaves to the dump truck. "After going through the blades and the vacuum, the leaves are really ground up," tells Craig. "I've never seen anything that even comes close to the Walkers for leaf collection."

Craig and Natalie both know the value of a good employee. A couple of families in the area have been supplying Mowin' Ranger employees from nearly the first year they went into business. It's almost like a right of passage, jokes Natalie. Family members work for the Corbetts before they move on with their lives.

But in all seriousness, these two business owners take their employees very seriously. After all, they are the company's on-the-road ambassadors.

"We try to teach our employees more than the fundamentals of mowing and the importance of doing a quality job," adds Craig. "We try to instill values. We want them to feel good about what they're doing so they have a sense of accomplishment at the end of the day."

Employees are all treated equally, too, he adds. "They're treated the same way we want our best customers treated."

The end result has been some incredible growth. In addition to the recently extended city contract that includes 10 acres of parks, seven acres of cemeteries and one and one-half acres of city center and the library complex, Mowin' Ranger last year did all of the area's LDS church properties.

The company's customer mix today is 70 percent commercial/30 percent residential. Expansion over the years has allowed Natalie to be more selective about properties they take on. Forty-five miles is a long way to go for work, and it only makes sense if there are enough properties in the area to make the drive worthwhile, she relates. In the meantime, Craig has taken on the Walker line as a dealer. Last year, he sold 10 new units and two used ones. He has plenty of room for even more expansion, now, in the new "digs" he rents from his dad.

To say that Mowin' Ranger is riding its way to success is a stretch of reality. The Corbetts put faith, family and hard work high on their list of factors that have contributed to their economic and spiritual well-being over the years. But the new riders played an important role, too. As Craig said, they taught them how to mow and how to make money.