"My Special Place" by Ben Kohler 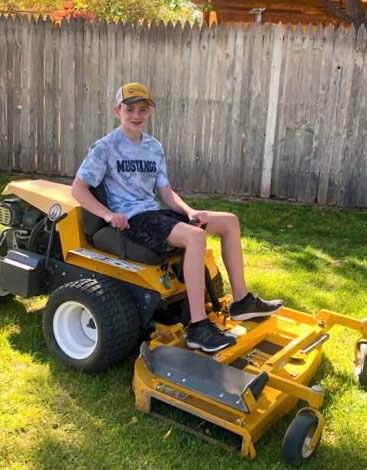 Everyone has a special place, for some it might be a park, a chair or even a town. My special place is a little different though, it is in the operator’s seat of a machine worth upwards of eleven thousand dollars. I have put in long hours, blood, sweat and tears for my special place. The Walker Mower B23i has always been a goal for me in my landscape company because I have worked for it, I have a passion for Walker Mowers and I have made tons of money on it.

I first started my landscaping company in the fifth grade, as a scrawny kid who could barely use a push lawnmower. I had one thing that others did not though–ambition. My parents always knew that I would go on to be a businessman from a young age. They did not realize that by the time I was fourteen, I would be paying taxes on what I made. I have always had the work ethic that allowed me to reach any of my goals, especially on this machine. It took me three years of hard work to purchase the B23i, but I finally did it.

Ever since I first walked into the Walker Mowers dealership, I knew what I had wanted: a Walker B23i. I have always had a passion for Walker Mowers, but I never knew just how far it would go. I bought my first Walker in the summer of 2019 when I had saved up three thousand dollars to buy an extremely used mower. I have since bought another Walker a year later, which is my special place. Walker has not just made me more money than a teenager could ever imagine, it has also grown my passion for helping people and my passion for mechanics.

The final reason why the operator’s seat of the Walker Mower B23i is my special place is because of the money it has made me. It is said that if you love what you do, you will never work a day in your life, and that has became a true statement in me. I love working with my hands and with machines, but it is even better when you’re getting paid for what you love. My machine has at times made me one hundred twenty dollars an hour for eight hours at a time.

In conclusion, it has become quite clear that the Walker Mower B23i is my special place, or it could even be said that it is my special thing. The combination of making me work hard, growing a relentless passion for what I do and making me fathoms of money for a teenager is why this is my special place. I never knew just how large my passion would grow for what modern society is lacking if I did not have this special place.