Pete and Mary Maust are not your ordinary Florida retirees. In fact, at age 85 and 80 respectively, they’re not retired at all. The couple still owns and operates M&P Lawn Service, and although they don’t maintain nearly as many properties as they once did, mowing and maintenance continues to bring home the bacon.

“We mowed 125 properties at our peak,” says Pete. “Today, though, we only mow about 10 properties a week.” When asked why he and Mary continue to work so hard so late in life, Pete pats his belly and remarks, “To keep food on the table, of course.” Mary looks across the table and tells her husband to be a little more descriptive than that. He gives an abbreviated synopsis of their life, from the time they were married 62 years ago in the small town of Hyndman, Pennsylvania, to today where they work and reside in Tarpon Springs, Florida. 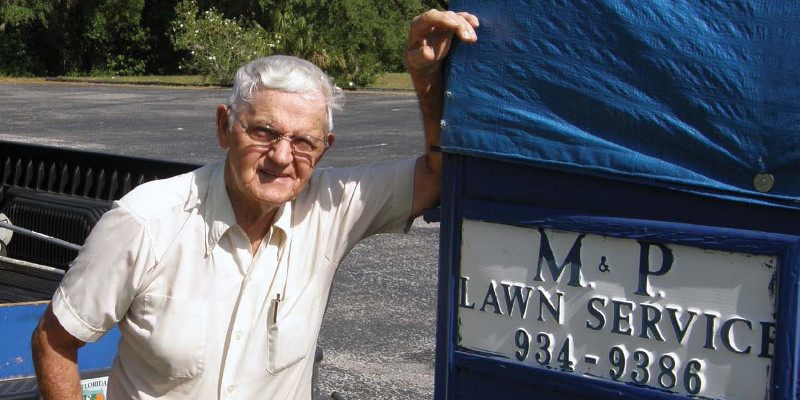 If one word can be used to describe the Mausts’ early years together, it would be “trucking.” From the time they were married until their three children grew up, Pete drove truck for the National Pipeline Company, hauling large equipment from one construction site to another. Tagging along was Mary, with a house trailer and children in tow. They would crisscross the country during the summer months and then spend winters at their vacation home in Tarpon Springs.

That gig ended in the early 1960s, after which Pete and Mary both took a trucking job with a yacht company, hauling huge boats around the country. The fact that they could “team drive” allowed them to deliver their loads in a timely fashion and share the experience of being on the road together.

The couple shared several of these experiences before getting back to the real reason they’re still working. Mary explains, “One day a pain started behind my left eye. I went to the doctor and had some tests done. It didn’t show what was causing the pain. We had a trip to Long Beach, California, so the doctor gave me some pain pills, which I couldn’t take because I had to drive. We delivered our yacht and returned home on a Sunday evening. Monday we were going fishing. Pete went for bait and I went to the doctor’s office. I left him a note that read, ‘I’ll be right back.’ Instead, I had a massive stroke right in the doctor’s office that caused a coma. I was only 49. I didn’t walk or talk for about two years.”

Mary looks at Pete and says that without the loving support of her husband, she never would have survived to tell that story. They persevered, and eventually Mary’s health returned to the point where she could drive again with Pete. But the fact that they didn’t have health insurance, and Mary has since required several operations, put them forever in debt to the hospital. 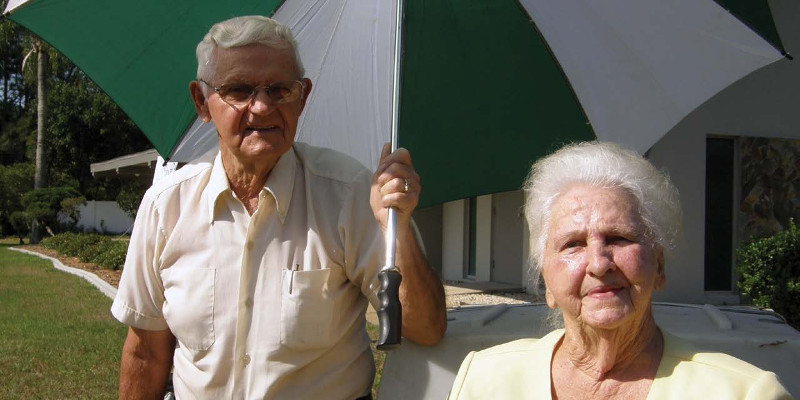 From Pavement to Turf

Pete had started mowing lawns part-time in 1981. Seven years later, when Mary could no longer join him on his trips, they quit the trucking business and went to work full-time to grow their maintenance business.

“We started with a push mower, broom, dust pan and an old pair of clippers,” Pete recalls. “By 1988 we had grown the business to the extent that we used five Snapper push mowers and hired many of our family members to help us. One of the first moves we made when we left the trucking business was to buy a Walker Mower. Our neighbor, Ed across the street, used Walker Mowers and knew they would be just what we needed.”

M&P Lawn Service has owned three Walker Mowers over the years. Their first was a 16-hp model with a 36-inch GHS deck, which was followed up by two 20-hp models. “Even though we have the grass-handling system, we use the mulching deck,” Pete explains. “It’s so expensive and difficult to get rid of lawn debris in this area, and the mulching deck does a great job at dispersing the clippings.”

The mowing couple has nearly as many stories to tell about riding on turf as they have about riding on pavement. “We’ve had some scary times,” Mary recalls. “One time I ended up in a retention pond with my Walker Mower. We weren’t alone, either. The pond had its share of alligators and snakes. Well, I just waited on the mower for Pete to come. There was a housing construction site nearby, and four men from the site came over to pull me and the mower out. Another time, my Walker Mower fell into a tunnel created by a large turtle. Again, I waited for Pete to help, and he had to pull out the mower with our pickup.” 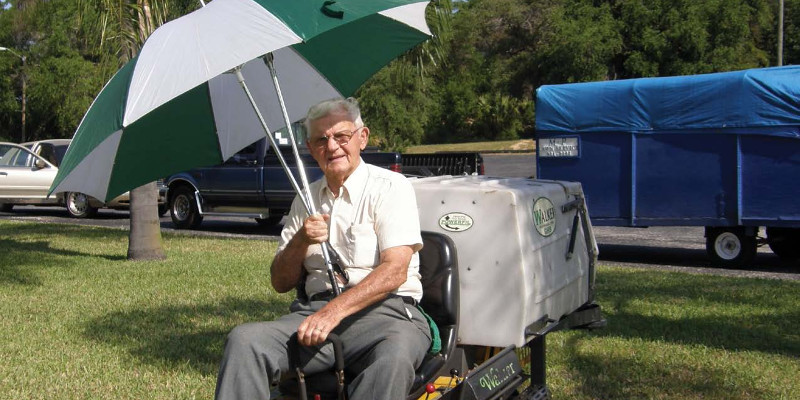 Looking back, Mary says that one of the more telling stories occurred a few years ago when she was edging a sidewalk in the pouring rain. “This lady pulled alongside me and said, ‘Honey, if you know your name and where you live, I’ll take you home.’” The working couple got a chuckle out of this episode, but the lady’s comment speaks to how unusual it is to see folks at their age still working.

“We’ve had a hard, but great, life together,” says Pete. Mary agrees completely, adding, “When I could finally talk after the stroke, I told Pete to look me in the eyes. He did, and I said, ‘Let’s get a divorce; this is no way for you to live.’ He responded by saying, ‘When we took our vows, the preacher said in sickness and in health. Don’t you remember that?’”

Indeed, the formula for success in their personal and business life has involved a strong faith in God and a deep love for each other. Mary puts it succinctly when she says, “Pete and I have had a wonderful life together. We’ve loved, laughed and struggled through our 62 years. Money was tight, but together we made it. I know through it all that the Lord was always on our side.”

Currently, Mary hasn’t been joining her husband in the field, but she says she will soon. In the meantime, she takes him lunch and looks out for him in the same way he has looked after her over the years.