The only Walker in town

Morgantown, West Virginia, is not the first place one would expect to see a Walker Mower. After all, the town is surrounded by mountains, and many lots are as steep as they are wide. So why does the owner of Think Greene have a Walker Mower on his trailer? “That’s easy,” says Nathan Greene. “When I was looking for an alternative to my mid-size mower, my uncle in Ohio said, ‘Buy a Walker.’ When I reminded him how hilly it was here, he told me the Walker could handle most any hill, and it will go backwards up anything.”

The nephew took his uncle’s advice. Two summers ago he purchased a used Walker from a dealer in Pittsburgh for $6,000. The 20-hp mower has a 48-inch GHS deck and a dethatcher attachment. “I have the only Walker in town, and I believe there are only one or two other leversteer mowers here,” says Greene. “Nine out of 10 contractors in Morgantown use mid-size walk mowers. I use the Walker on all but one of my 33 properties. Doing so gives me a time and quality advantage over my competition. And since I purchased the machine, I have had more time to provide other services to customers.” 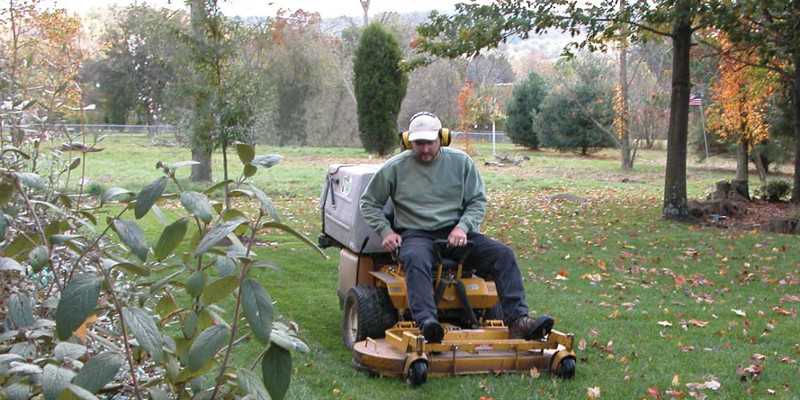 Greene received a degree in landscape architecture from West Virginia University. After marrying his college girlfriend, he moved away from Morgantown for a couple of years and returned when his wife found a job back home near her family. He found work with an area landscape contractor, only to lose his job a year later when a fire destroyed the company’s headquarters.

“The owner told me he was planning on rebuilding, but couldn’t give me a definite answer about when he would be rehiring,” remembers Greene. “We had just purchased a new home and I couldn’t wait around long without working. I decided to mow lawns and started stuffing mailboxes looking for work. One mailbox happened to belong to a contractor who wanted to sell his mowing business. I purchased a Gravely walk-behind and a trailer from him, and picked up a few of his accounts. A year later I purchased the Walker.”

Of his 33 properties, two are commercial establishments, three are apartments and one is a homeowner association. Thirty of his properties are full-time mowing accounts; on eight of them he also applies fertilizer. He mows three residential properties every other week. In his spare time, he offers landscape enhancement services, too, including the installation of hardscape features.

According to Greene, using the Walker gives him two distinct advantages over competitors. First, the machine does such a nice, clean job of mowing that he now promotes the quality of cut his Walker delivers. “The Walker deck just doesn’t scalp, and that has proven to be a distinct advantage in this area,” he points out. Then, Greene says the Fine Fescue so prominent in Morgantown requires the collection and bagging of clippings, which “took forever” with his Gravely. The Walker’s collection ability and maneuverability cut his mowing time in half. 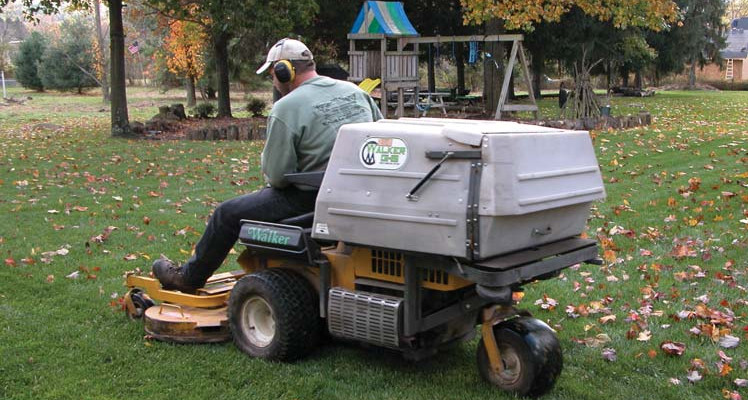 After a couple of years in business, Greene has a decision to make. Does he want to continue to grow his mowing business or should he expand into other areas, possibly taking further advantage of his landscape architecture degree? There is some discussion, too, about providing an entirely new service: landscape edging and curbing.

“The thing I really enjoy is working by myself, and no matter which way I grow the business, I will have to retain an employee,” he relates. For the immediate future, though, his used Walker takes the place of an employee. That’s not a bad trade-off, he adds. The Walker is reliable and easy to maintain, especially with the tilt-up deck. The mower rarely calls in sick and doesn’t even complain about mowing the hills. Sounds like a match made in Morgantown.