The pioneering spirit lives on in central Vermont

Ask Dave Hawkins of East Calais, Vermont, if he’s a pioneer, and he’ll probably just shrug his shoulders and say, “Not at all.” His family roots are planted deep beneath the Green Mountains that highlight the state.

Ask again, and you’ll start hearing the story of how he comes from generations of dairy farmers, how he and his wife of 34 years, Brenda, sold their cows in 1983, and how he went through 12 jobs the following year, hunting for something that would satisfy both his work ethic and independent spirit. When nothing came up, he started knocking on doors asking folks if they needed any yard work done.

“Dave was one of the first people in the area to get the lawn maintenance ball rolling,” tells Brenda. “There weren’t many companies doing lawn maintenance, and there surely weren’t many that were going door to door asking for the business.” Dave persisted, however, and his first job marked the beginning of Diversified Landscape Maintenance.

Dave muses a bit over the company name. “Before we went out of the dairy business, a county agent told us we needed to diversify. Imagine that, we had more than 60 registered Holstein cows, an equal number of heifers, and a farm to support them — and we had to diversify. So, when we started our lawn maintenance company, it just made sense to call it Diversified Landscape Maintenance.” Today, Dave has shortened it to DLM.

Officially, this will be DLM’s 14th mowing season. The company is family-owned and -operated. In addition to Dave and Brenda, the two other mainstays are son Kurt and son-in-law Michael Burnor. Among the four of them, they mow upwards of 60 acres of grass weekly.

“Correction,” says Brenda, who heads up the admissions department at nearby Goddard College. “I don’t mow, but instead enjoy designing and installing flower beds.” In between, she handles all the accounts payables and receivables, along with other bookkeeping responsibilities.

During busy season, the company employs seasonal help. And for big projects, Kurt and Michael recruit a couple of friends to pitch in. Otherwise, it’s full steam ahead with the four of them. “Yes, you could say we’re a little over-extended,” says Dave. “In fact, by the middle of May we were booked solid through July. But that’s the nature of this business, and the alternative is less than attractive.”

What is the nature of their business? DLM offers a full spectrum of landscape services, excluding weed and pest control. Approximately 80% of its work, however, is mowing — mowing commercial properties, including six condominiums, a college and a church — and more than 40 residential properties.

The team mows four days a week, and saves the fifth day and sometimes part of Saturday for landscaping projects. As Dave explains, landscaping is generally more lucrative than mowing, but they’re “comfortable” mowing, and it has buttered their bread over the years and will continue to do so. Many of their commercial accounts are on either six- or 12-month contracts (including snow removal), which helps with the cash flow and covers most of their expenses, adds Brenda. DLM gets the mowing done with the help of Walker Mowers. The lineup includes two 20-hp units, a 16- hp and a 25-hp. They are equipped with either a GHS or side-discharge deck, and two have more than 3,000 hours each on them.

“We purchased our first Walker in 1991 after seeing one for the first time at a lawn and garden fair,” Dave remembers. “I knew immediately it was what I wanted. When we started in business we had a John Deere steering wheel mower and graduated to a Country Clipper. At the time, we thought the Country Clipper was a Cadillac, and it was a good mower. But then we found the Walker and nothing has compared to it since.The biggest difference, I think, is in the steering. They’re so easy to steer and maneuver that by day’s end you don’t feel nearly as fatigued as you do with other mowers.”

Michael and Kurt both agree. “We pride ourselves in the fact that we do good work,” says Kurt, who joined the company full time in 1995 after four years in the Army. “The Walker gave us an opportunity to do more work, and even better work, in the same amount of time it used to take with our other mowers.” Michael, who joined the family operation in 1998, notes that the mowers are effective even on the hills, and Vermont has plenty of hills, he quickly adds.

The Walker blended in nicely with Dave’s pioneering spirit. The mower allowed him to become one of the first contractors in the area to stripe lawns, and DLM is still one of the few companies, if not the only company in central Vermont, to operate a Walker. 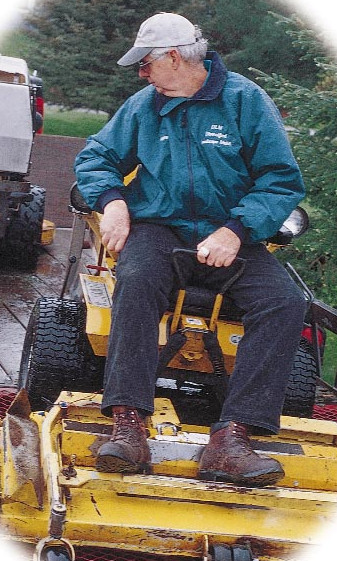 The Walker Mower has to be one of the best kept secrets in the area,” Dave explains, noting that other area contractors either haven’t discovered the mower or think it is too costly compared to others on the market. He doesn’t mind being unique, however, since the mowers give him a competitive advantage. In his words, “When we were in the dairy business, it always made economic sense to buy the best calves possible because they ultimately became your biggest milk producers. Now that we’re in the mowing business, it only makes sense to operate the best mower that money can buy.”

Learning On The Job

Although there are plenty of similarities between operating a lawn maintenance business and farming, DLM still had to climb a learning curve to get where it is today. Knowing how to price was a tough lesson to learn.

Dave recalls, “Years ago, we quoted a mowing job to a lady for whom we had done some landscaping. I told her it would cost $45 to mow her lawn, and added quickly that I knew it was a little pricey. She pointed a finger at me and said,‘I’ll be the one to determine that.’ I felt so small, but I learned right then and there that you can’t assume to know your customers, and shouldn’t be ashamed to ask the price you need to make a decent profit. Today, we can’t drop a tailgate for less than $25, no matter how small the lawn is.”

DLM charges somewhere between $25 and $100 per mowing for most of its residential properties. The cost is dependent on the size of the property, its location from the shop, and the degree of difficulty. “We probably get somewhere around $30 to $35 an hour for mowing a lawn,” Dave says. “That’s not as much as some parts of the country, but competition in central Vermont has increased recently because of area layoffs. When people are laid off, they simply purchase a mower. Since their overhead is low, they can charge a lot less than us.”This makes the Walkers even more important, he emphasizes, because they allow his crews to mow fast and still deliver a quality cut.

Dave has learned other lessons, too. Early on in his lawn maintenance career, for example, a customer asked him why he had failed to trim the grass around her house the last time he visited her property. When he said he did, she showed him the correct way to trim.

“I was trimming the grass with a weed trimmer to the same height that we had mowed the lawn,” Dave relates. “Because of the heat, the grass around the house grew faster than the rest of the lawn, and by the time I returned, it appeared that I had failed to trim it. She took the trimmer from my hand and said, ‘Trim at an angle like this.’ She essentially tapered the trim from the 2.5-inch mowing height to nothing right next to the house foundation. It looked neat and it stayed that way until our next visit.”

Dave was a fast study. He listened to his customers and learned from them. He also imparted his own knowledge of soil management gleaned from his farming days. “We’re not licensed to apply pesticides and herbicides in part because of the stringent laws regarding their use,” he says, adding that, as a general rule, weed and pest controls are overused anyway. Weeds, he notes, can be kept to a minimum by ensuring that the soil pH is right, and that lawns are given an opportunity to become thick and lush. 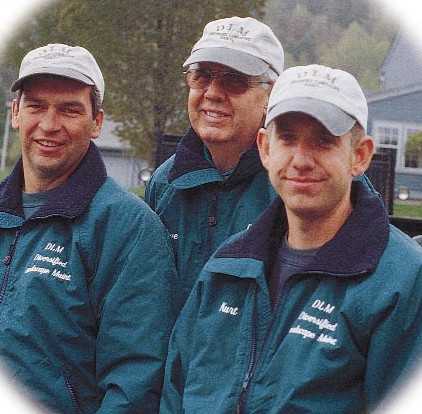 A strong work ethic in combination with experience and know-how grew more than healthy landscapes for DLM’s customers. The company’s reputation, grew, as well. Today, Dave, Brenda, Kurt and Michael take exceptional pride in their work, no matter if it’s mowing, designing and installing flower beds, or doing those little extra things customers are not used to having done.

“We bid a property recently and the owner told me that we weren’t the lowest bid,” Dave recalls.“I looked at him and said, being the cheapest has never excited me.” Being the best does, though, and he means it when he says, “The first time I leave a property and know I haven’t done the best job possible will be the last job I do.” Unfortunately, that means retirement for this pioneer will be a long ways away.