One Lawn Leads to 400 Others in Salt Lake City

Jeff Wright spent the first half of his career mowing lawns out of necessity. For the last 20 years, his motivations have been pride and pleasure.

“Sometimes a customer will say to me, ‘Jeff, I couldn’t believe it. Your guys were in
and out of here in five minutes.’ I’ll reply, ‘You mean it took them that long?’

“I still enjoy mowing after nearly 40 years,” says Jeff, owner of Lawn Care the Wright Way in Salt Lake City, Utah. “Once a week I meet all of my guys at this large commercial property to help get some of the common areas mowed. Even though I have plenty of other things to do, it’s really hard to give up mowing.”

Some of those “other things” include fertilizing and repairing sprinkler systems. In the winter, Jeff plows snow. In his spare time year-round, he takes care of business tasks such as bidding, invoicing and customer service. 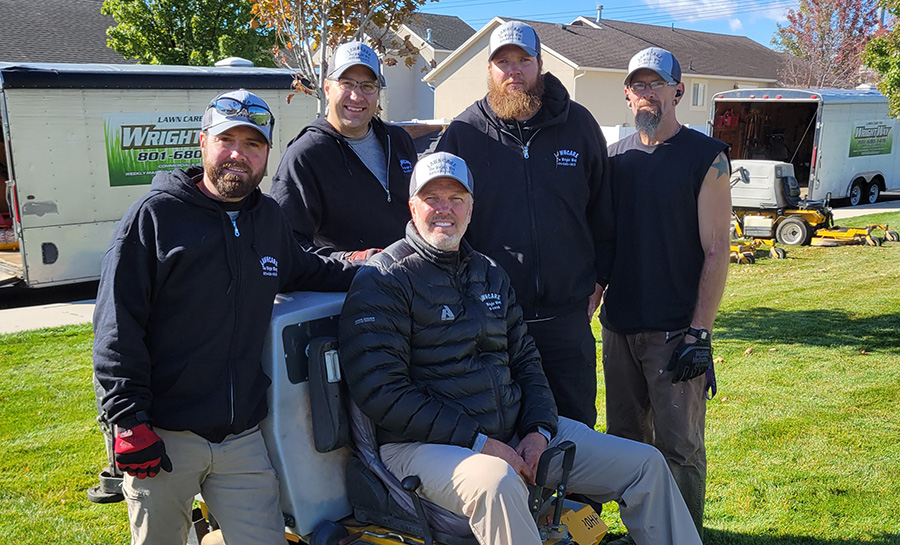 “Being a smaller company is what gives us an advantage,” Jeff says. “Good communication with customers is the key, particularly in residential, but also in commercial. Even on this PUD (planned urban development) we’re servicing today, many of the homeowners look forward to seeing us every week.

“I’m very personable and get very friendly with customers,” Jeff continues. “In a way, that can sometimes be a bad thing. To me this business is about dollars and cents, not hundreds and thousands of dollars on a job. Every minute counts. It’s really not the best idea to sit around talking. But when you have a personal relationship with customers, it can be tricky. What people like most about us is that they don’t have to talk to an HR person or someone else in the office. Customers can talk directly to the owner, and that’s me.”

That competitive advantage is what helped Lawn Care the Wright Way outduel a massive national service provider to win back a large commercial account. “We had serviced this big PUD for about eight years,” Jeff says. “Then some board members changed and the new board decided to go with this national landscape maintenance company. After a year, the board called me up and said they wanted us back. That was a few years ago and I’m hopeful we’ll continue to service this property for many years to come.”

Jeff has lived in the Salt Lake City area his entire life. He first started mowing lawns as a kid in the early 1980s. “I was still too young to drive so I just used my customers’ equipment,” Jeff recalls. “At that time, mowing was just a way for me to make a little money.”

After high school, Jeff got a full-time job at a food manufacturer. Before long his second son was on the way, which is why Jeff continued mowing lawns on the side to make as much money as possible. “For 14 years I worked in a freezer all day and mowed lawns in the hot sun all afternoon,” Jeff tells. “It worked out great because my shift ended at 1 p.m., giving me plenty of time to get a lot of lawns mowed before the sun went down.”

In 2001 Jeff came to the realization that mowing could be his primary source of income. He decided to quit his full-time job and begin marketing his mowing business more aggressively.

“I had things built up to around 65 or 70 accounts,” Jeff recalls. “I had also taken over some lawns I’d been mowing with a buddy of mine. He went off to college and just didn’t have time anymore. From there I ended up buying out a couple of other small mowing companies. Then I started advertising on my trailers. One lawn just led to another.”

Some 20 years later, Lawn Care the Wright Way mows roughly 400 residential lawns along with a few commercial properties. Jeff is open to taking on even more business, but it has to be a good fit.

“When I was working by myself, I didn’t care about the window time (driving between properties),” Jeff says. “Now that I have two other crews in addition to myself, I have to watch it. When we add new accounts, they are usually in a neighborhood we’re already servicing. The customer also has to be willing to let us schedule them in when we can. You can’t mow everybody on Thursday or Friday. Most people are flexible so it usually works out fine.” 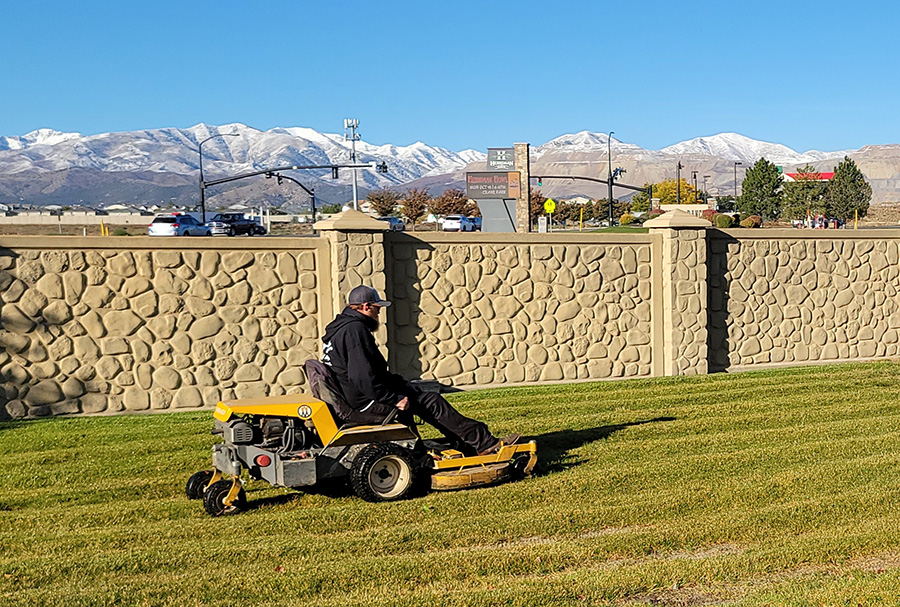 Lawn Care the Wright Way employs four full-timers: Jeff’s sons, Trevor and Preston, along with Kevin Nielson and John Bench. Jeff says he is lucky to have a good group that has been together for five years now. Jeff’s neighbor, Jeremy Christiansen, helps out part-time as needed, particularly during snow season.

Jeff’s company’s name is obviously a play on his last name. “This is what I called my company even before I started doing it full time,” Jeff says. Word plays aside, Jeff does have a clear vision of what it means to provide lawn care the Wright Way.

“Our goal is to be as reliable as the sun coming up,” Jeff says. “If we are ever running behind by an hour or so, it’s not unusual for a concerned customer to call and see if everything is OK.” 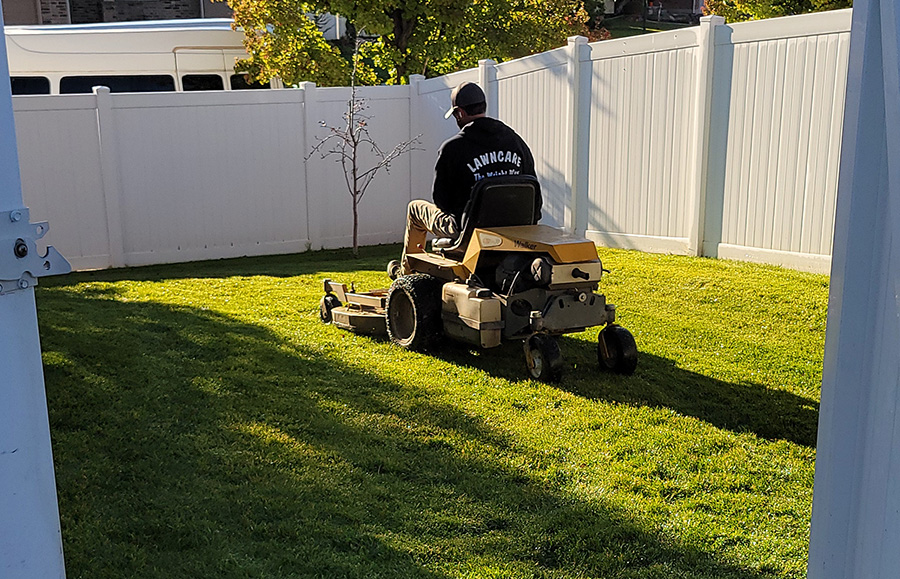 Getting into backyards through tight gates was an issue with some of the other bagging mowers
Jeff Wright used, but not the Walker. Pictured is Jeff’s son Trevor.

The Wright Way to provide lawn care is also about fixing problems. “I always tell my guys that they shouldn’t get upset or talk back if a customer ever comes out to complain,” Jeff says. “Just listen and let the customer know what you can do to make it right. Let them know we understand how they’re the ones paying the bills and we’re there to please them.”

On that note, Jeff has become proficient at repairing broken sprinkler heads. Let’s face it, mowers sometimes run into them. When that happens, Jeff wants to make it right as soon as possible. After years of hiring subcontractors to do the repairs, Jeff decided to learn how to do them himself. “All of our trucks are set up to do basic irrigation repairs on the spot,” Jeff says. “I’ve also found that sprinkler work can be good money, so I’ve begun marketing it more heavily as one of the services we offer.”

Jeff has also gotten heavily into fertilization after years of using subcontractors. “One day I just thought to myself, ‘Boy, I really shouldn’t be giving out referrals on the properties I’m mowing.’ Now I only hire a subcontractor if they only provide that one particular service. Then I don’t have to worry about them trying to underbid me on mowing,” Jeff explains.

In addition to mowing and fertilizing, Lawn Care the Wright Way includes aerating and dethatching. “We use our Walkers for those services too, because the attachments work great,” Jeff says.

Jeff first started using Walker Mowers a few years after going full-time in the mowing business. Prior to that, he had primarily been using intermediate walk-behind mowers. He also dabbled with a mid-mount zero-turn. “The zero-turn was all right, but I couldn’t get through a gate with a bagging system attached,” Jeff recalls. “I saw other people using the Walkers and thought they looked pretty cool.”

After visiting his local dealer, Al’s the Chainsaw King, in Murray, Utah, Jeff was sold. Since his initial Walker Mower purchase in 2004, Jeff has purchased 15 more. Today he owns 10, a mix of GHS-equipped tractors and Model B’s with mulching decks. “I really like the 48-inch deck, but a 42-inch really comes in handy when having to get through tighter gates,” Jeff says. 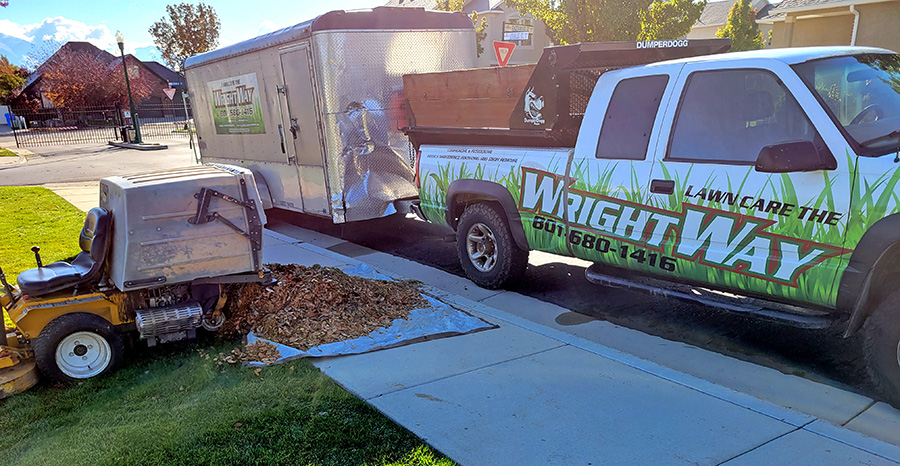 Crews have found that dumping onto a tarp is the most efficient way
to get clippings and leaves off of a lawn and into a truck bed.

Whether bagging or mulching, Jeff says he has saved countless manhours by using Walkers. Maneuverability is the main reason why. “Sometimes a customer will say to me, ‘Jeff, I couldn’t believe it. Your guys were in and out of here in five minutes.’ I’ll reply, ‘You mean it took them that long?’ I’m joking, of course, but the efficiency really has been impressive to me, my employees and even my customers.”

Jeff has taken a keen liking to his Model B’s with mulching decks. “They’re fast and provide an amazing cut,” he says. Still, crews continue to bag a lot of grass, especially in the spring when growth is faster. Bagging picks up again in the fall when leaves start dropping.

“We’ve started dumping onto tarps,” Jeff points out. “We’ve found that to be the most efficient method. Two guys can easily pick up a tarp and drop it into a truck bed. We haul our clippings to a friend’s property where he uses them to feed his cattle. Several area landscape companies do the same thing. I’ll hate to see the day when he sells his property and we have to haul to the waste site. We take some of our grass there now, but I’d much rather give it to my friend.”

Whatever happens, Jeff Wright will roll with the punches. That’s what he has done for the past 30-plus years. He still loves what he’s doing and his business is still growing— two natural byproducts of doing Lawn Care the Wright Way.