Second Generation Stepping Up to the Plate

Andrew and Matt Mendenhall loved baseball growing up. They got to be pretty good at it too. Andrew ended up playing center field at Oregon State University while Matt played first base at Washington State University.

With a company the size of Heritage Professional Landscaping, consistency,
track-ability and accountability are crucial.

The brothers knocked it out of the park in the classroom too. Andrew snagged a business degree while Matt scooped up a degree in landscape architecture.

When Andrew and Matt were first developing their passion for baseball as kids, their father, Randy, was building what would become one of the largest landscaping companies in the country. Founded in 1994, Heritage Professional Landscaping in Kennewick, Washington, now generates annual sales in excess of $13 million.

That’s a lot of money, on par with the kind of lucrative baseball contract Andrew had always dreamed of landing. But when it became clear that a career in the Major Leagues probably wasn’t going to happen, Andrew looked to his backup plan. “I always knew that if baseball didn’t work out, I would join the family business,” Andrew says.

That’s exactly what Andrew did about eight years ago. Younger brother, Matt, followed suit a few years later. With their baseball-playing days behind them, the Mendenhall brothers are now focused on helping manage the mammoth company their father has built.

“We’re always looking to do more and grow,” says Andrew, maintenance production manager. “When I first started working here after college, I was a bit shocked by how much was going on. My business degree really helped with things like sales, contracts and the financial side. But I had a lot to learn about landscape maintenance and all of the details involved. I was surprised by how much work goes into developing efficient routes, maintaining equipment and making sure crews have everything they need. Those are things you don’t think about a mowing company having to do until you’re the one who has to do it.”

Matt, who works in the company as a landscape designer, estimator and project manager, appreciates the fact that he can see a project through from start to finish. “Working closely with a customer and seeing them walk away happy is my ultimate goal,” Matt says. “A lot of times when a project is completed, I turn it over to my brother and the maintenance department. That’s one of the perks of doing business with us.”

DAD MOVES THE FAMILY TO START A FAMILY BUSINESS

Randy Mendenhall also earned a degree in landscape architecture from Washington State University. He worked for a company in the Seattle area before deciding he wanted something different. Randy had heard that the Tri-Cities area in eastern Washington was on the verge of booming in the early 1990s. So he packed up his wife, two young sons and their belongings and headed east.

Initially, Randy leveraged his education in landscape architecture and focused exclusively on landscape design/build. Andrew was barely old enough to ride a bike, but remembers the little fenced-in yard where Dad kept his equipment. As Andrew and Matt grew, so did their father’s business. By the time the brothers reached high school, that little fenced-in yard wasn’t good enough anymore. Heritage Professional Landscaping relocated to its current facility about 15 years ago.

The company also started expanding more aggressively into other services, especially landscape maintenance. “The maintenance business was almost like an afterthought, but it grew like crazy,” Andrew tells.

BUILD-AND-MAINTAIN IS THE NAME OF THE GAME

Maintenance is by no means an afterthought today. In fact, the maintenance department at Heritage Professional Landscaping generates roughly the same amount of sales as the landscape construction department. It’s a healthy mix that is self-sustaining.

The majority of the maintenance accounts are commercial. It’s a combination of apartment complexes, HOAs, retail outlets and restaurant chains. “We have the manpower and equipment to handle the larger jobs,” Andrew says. “We do have some residential clients, but we prefer the larger commercial accounts that are renewed annually.”

Of course, the client has to be happy for the account to be renewed. Workmanship is the differentiator that sets Heritage Professional Landscaping apart. That’s why mowing crews bag grass 90% of the time. Workmanship is also why crews have come to rely on their Walker Mowers after experimenting with another bagging mower for several years.

“The only times we don’t bag grass are when the properties are just so large that we couldn’t get them serviced in a single day,” Andrew points out. “So we keep a couple of mulching decks in the shop. A crew can just swap out their deck on a day they won’t be bagging. We like doing it this way rather than trading entire mowers back and forth between crews.”

With a company the size of Heritage Professional Landscaping, consistency, track-ability and accountability are crucial. The company dispatches 27 maintenance crews from its main location in Kennewick. Eight crews operate 85 miles away from the Yakima branch that has been open for 10 years. The Spokane branch, 140 miles away, open for eight years, has six mowing crews. That’s 41 mowing crews total, each of which has two employees. 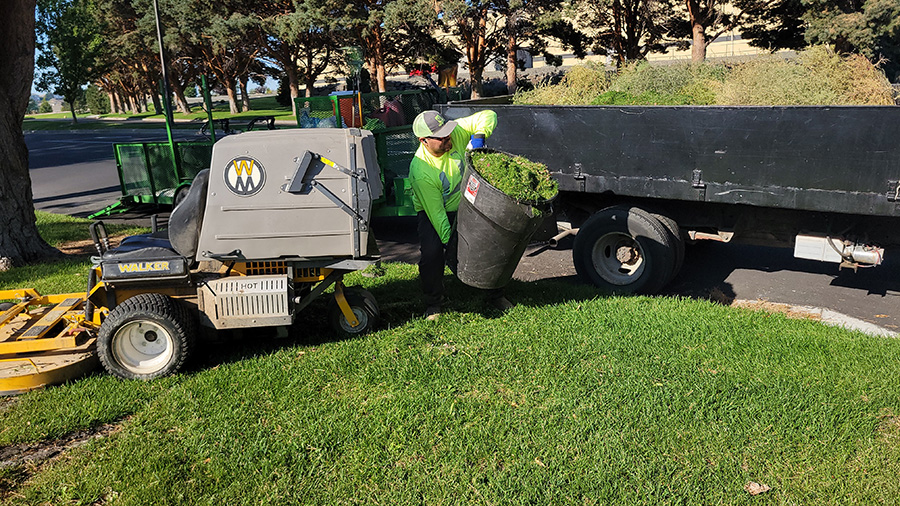 Mow crews bag grass 90% of the time. Most commercial customers value the way
their properties look and are willing to pay the modest premium.

The Walker Mowers, each with a 48-inch deck and GHS system, are used almost everywhere, aside from those really small patches of turf where a push mower works just fine. But even when using a push mower, the operator bags the grass. All of those clippings, including what the Walker gobbles up, are loaded by hand into a garbage can and then up into the truck bed.

Every night when the mowing crews return to their respective shops, all of that grass is transferred from the truck beds into garbage dumpsters. That’s a lot of grass, and the dumpsters fill up quickly. Fortunately, Andrew has a cost-effective and environmentally friendly way to get rid of it. “We have a local company that needs all of that grass,” Andrew says. “They come and take it every day. They turn it into compost to sell to area farmers.”

EVEN HUGE COMPANIES HAVE GROWING PAINS

In addition to its 41 maintenance crews, Heritage Professional Landscaping has eight landscape construction crews, six irrigation technicians and two lawn care spray technicians. Just like everyone else, the company has felt the effects of a challenging labor market. 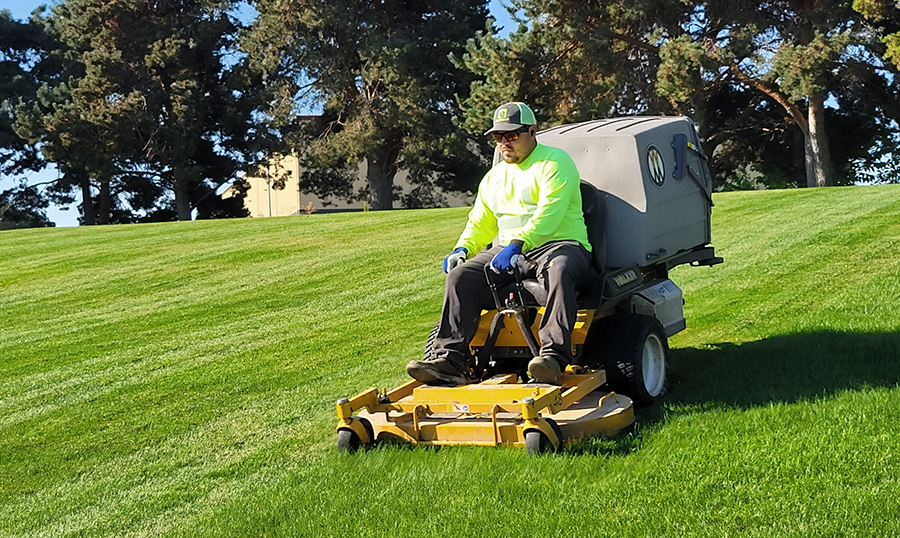 Samuel DeLeon is one of the company’s many loyal employees. Samuel is also loyal to the Walker Mower.
“I even bought one of these to mow my own lawn … I just love it,” he says.

There have been some new hires who didn’t work out. A few managers have come and gone. Andrew even had to hire a new salesperson last year.

“All in all, the changes have been positive,” Andrew points out. “That said, we did have a different kind of growing year in 2021. We had to hire more people with no experience than ever, so we had to do a lot more training. By the end of last year, we were in a really good place. As challenging as things have been, we also have a lot of guys who started here with my dad when they were 18 or 20 years old, and now they are in their 40s. That kind of consistency and experience makes a big difference.”

Andrew and Matt Mendenhall have benefited greatly from their dad’s experience, especially nowadays as they are taking on more responsibility. Randy is still quite active in the company, spending much of his time overseeing the larger construction projects. But Randy has come to a point in his career where he likes to take some time off here and there.

“We don’t talk about it a lot and don’t necessarily have a firm plan in place, but the thought is that Matt and I will take over the company one day,” Andrew says. “We’ve just been working our way up. When I first started working here, I was on a mow crew for two or three years. Then every few years I’d do something different, from sales to irrigation. I’ve just tried to work my way up and learn all aspects of the company.”

Matt concurs, adding that there is no better way to learn than from great mentors on the job. Naturally, one of those mentors has been his father. “Our dad has always reminded us to treat every landscape we work on like it was our own,” Matt relates.

“Another thing Dad has taught us is that it’s about the employees,” Andrew adds. “Building relationships with employees and making sure they feel appreciated is so important. Without them, we wouldn’t be able to do what we do and be as successful as we are.”