"You are what you think you are"

In one way, Kenneth Vaughan, owner of KLV Landscape Services, Inc. is your typical contractor. "From my early childhood, I wanted to mow," he explains. He mowed lawns while growing up in Arlington, Texas. He worked his way through college mowing lawns and when the opportunity arose, he purchased the lawn maintenance business from a landscape contractor... and never looked back.That was in 1982. Thirteen years later, mowing is still the mainstay of his business, but the picture has changed slightly. Instead of mowing seven commercial accounts and a handful of residential accounts like he did in his first year of business, maintenance today accounts for better than half of nearly $1.5 million in annual sales. Instead of one maintenance crew, he has five, in addition to two installation crews, two irrigation crews, an enhancement crew and a bush hog crew. Of KLV maintenance contracts, 75 percent are commercial, the rest are larger residential and estate-type properties. 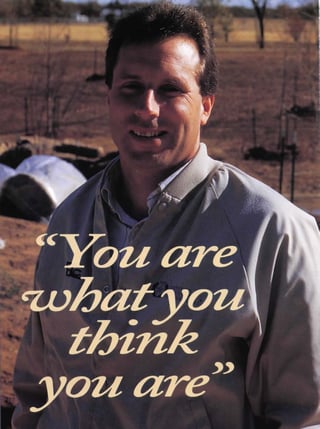 "You are what you think you are," says Vaughan. Starting out, he envisioned his new maintenance business as a successful operation. It happened. Later on, he wanted to expand and grow a successfi.tl fullservice operation. That has happened, too. And today, he wants to be recognized as one of the leaders in the industry in the Dallas area. Few would dispute the fact that he has already reached that goal.

Vaughan admits being a maintenance contractor wasn't always at the top of his vocational wish list. He went to school to be a banker. In addition to mowing about 30 yards a week to get him through school, he worked part time (35 hours) at a local bank making collection calls. It was a good experience, Vaughan relates. At the bank he developed an understanding for the kinds of mistakes in judgment his customers made in their personal finances, mistakes he would strive to avoid at home and at work.

He learned well. Vaughan grew his new maintenance business gradually, adding his first new crew in 1985. A year later, he added another maintenance crew and a spray crew. Two years later, the present shape of the company took form with the addition of an installation crew. Today, he continues to expand the company at a slow but steady rate, looking to sustain 20 percent annual growth.

Ask Vaughan today what drives his company forward and he says quality. "We really push the quality aspect of our operation," he tells. The company has been a member of Texas Association of Landscape Contractors since 1985, and last year won a merit, distinction and grand award from the association for three maintenance properties. The key, he points out, is to get employees involved. One of his employees, for example, is president of the local chapter of TALC, and three have passed the certified landscape professional program administered by the association. The certification is more than show; some government contractors now require it.

Quality alone won't pay the bills. Crews need to be productive. They need to get the job done in the most cost-effective way possible, without sacrificing quality. When he was introduced to his first Walker Mower in 1993, Vaughan made the connection. Crews could abandon their intermediate walk mowers and mow twice as fast with less fatigue. And, he says, "they could deliver a nicer cut." The best of all worlds. 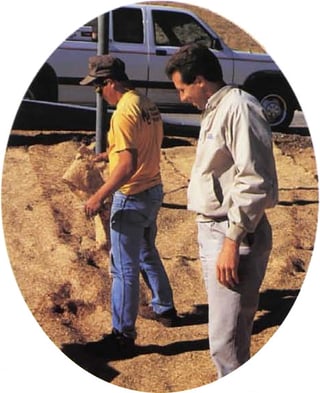 "We demonstrated the Walker during leaf removal time,'' remembers Vaughan. "Crew members simply blew the leaves out of the beds and picked them up with the mower's grass handling system. It saved a lot of time and energy." The Walker would eventually increase the company's leaf removal efficiency by 50 percent. Disposal would not be a problem, since KLV crews would either compost the leaves right on site, or take them to home base and compost them for use later on installation projects.

KLV bought two Walker Mowers the following year and added another a year later. Today, three diesels with 48-inch decks police properties, and their work goes well beyond leaf removal. In fact, Vaughan says crews use them any way they can, from delivering a fine cut to "scalping" in the fall.

Of the 104 properties his crews maintain, approximately 40 percent of them are overseeded each fall with perennial ryegrass. Standard practice in Texas and in other areas of the Southwest, overseeding with ryegrass is a two-step process: cutting back or scalping Bermuda grass, and laying down the ryegrass seed. Prior to the Walkers, KLV crews would scalp the Bermuda back from 2 1/2 inches to 1/2 inch high using intermediate mowers with side-discharge decks. The debris would be blown to the center of the yard and picked up for removal. Now, the \Nalker comes through and does the process in one step, cutting not only the grass back but cutting 60 percent off the time it would normally take to do the job, says Vaughan.

The time savings alone during the leaf removal and scalping season convinced KLV's owner of a place for the Walker on his crews. There has been an additional side benefit, too, one you can't point to tangibly, he emphasizes, but one that's still there.

"The Walker mowers have elevated our entire maintenance operation, just by the cut they leave. When the mowing job looks great, it instills an ongoing sense of pride in employees who work harder to make the entire project look as good." Which gets back to his theory that you are what you think you are. Seeing just helps to reinforce the attitude. 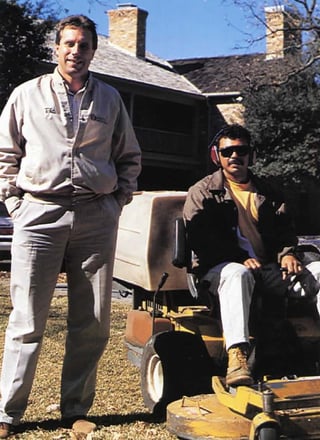 Having excellent, well-trained employees and having the right equipment goes a long way in the maintenance business. But seeing is believing for customers, too, and it goes beyond leaving behind a well maintained yard.

"I want to get bigger, yet maintain the ma and pa feeling," tells Vaughan. "Personal relationships are extremely important in this business. If customers see you and you are available for questions, they know you're thinking about them and their properties." What they can't see, can hurt, he adds. Which is one reason, KLV has an office manager and a sales rep. It leaves more time for Vaughan to keep relationships alive.

What a change. From a small lawn maintenance firm in 1982 to a large full-service operation in 1995. To be sure, you are what you think you are, but even then there are surprises in store. Little did KLV's owner think he'd being mowing with a Walker when he hung his shingle. Nor did he have thoughts back then of becoming a leading full-service landscaping firm. Taking small and controlled "quality'' steps helped get him there.