Mike Barbero, owner of Real Estate Maintenance Co. in Boise, Idaho, was introduced to his first Walker 12 years ago. He purchased two at that time and has since purchased another. Identical in configuration, the three are powered by 16-hp Kohler engines and have 42-inch GHS decks. They all have one other thing in common: They're still going strong. 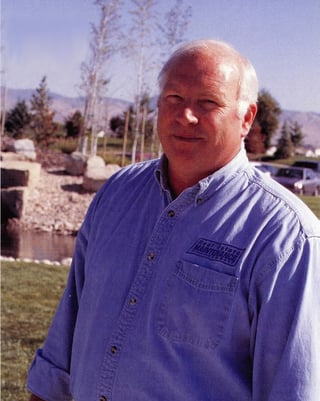 Barbero is the pragmatic sort. He doesn't see any sense in buying new equipment when the old works perfectly well. Sure, he's had a few repairs to make over the years. The Walkers have been repowered once, the shells repainted, hoppers replaced, and they each now sport new tilt-up decks. Beyond that, they've delivered every day since they left the dealer's lot.

Equipment For The Job At Hand

What Barbero needed 12 years ago was something other than a belt-drive intermediate to mow his properties. His Boise properties were dotted by lots of berms. And the area received more than its fair share of rain.

"My belt-drive intermediates were driving me crazy," he relates. "I was only a two-person company with a heavy schedule back then. Every time it rained they would slip, and I would get behind.

"I saw the Walker for the first time at a garden show in Boise and knew immediately that it was the right mower for this town." 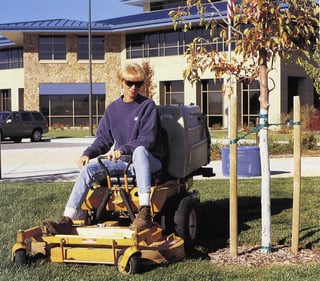 "You have to fit the equipment to the jobs you have," says Barbero, who today maintains approximately 30 commercial accounts, including shopping malls and office parks in and around Boise. "The intermediates are versatile and great for hills. But nothing beats the Walker for riding. It's maneuverable, does a great job of cutting and has excellent catcher capacity. Wherever we want the best cut, we use the Walkers."

One of those areas is a new, 35-acre Blue Cross of Idaho site. A recent consolidation of several area Blue Cross locations, the new facility employs 550 people and has approximately 21 acres of landscape to mow and maintain.

"We've given Mike control of the maintenance of this facility," relates facilities manager Bill Poindexter. "His company offers a variety of services. We trust his work. I can talk to anyone from his crew and they will be able to answer my question or take care of any request.

"As far as the mowing is concerned, it looks awesome, especially right after they mow. There's no question the Walker Mowers lend to the look of the property. But it's really the mowers in combination with the people who operate them, not to mention Mike's reputation, that count."

Real Estate Maintenance Co. just didn't step into Blue Cross and show its credentials. Barbero and Poindexter have known each other and worked together for the better part of 12 years. In fact, on most of the properties he maintains, Barbero has worked long and hard at developing lasting relationships with property managers. One can say Barbero puts as much stock in lasting relationships as he does with equipment that has delivered timely service over the years. 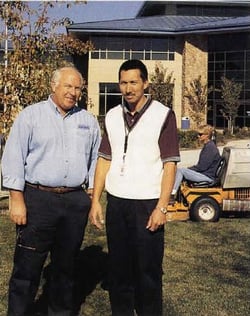 "Boise is a great place to live, but don't tell anyone that," Barbero says. There's enough growth in the city already. Long-known for its agriculture, specifically potatoes and sugar beets, the city is home to one of the largest chip makers, grocery chains and building contractors in the country. Boise, and surrounding Treasure Valley, is also going through an incredible housing boom. That combination spells opportunity for creative contractors such as Real Estate Maintenance Co.

But growth wasn't a high priority for Barbero until a recent back injury put him on the sidelines. As he puts it, he simply had to grow to survive.

The company, which employs 12 people in peak season and four year-round, seeks to reach a goal of $1 million annually. The bulk of that business would be in maintenance and add-on landscape installation. More recently, Real Estate Maintenance Co. expanded its niche to take advantage of a licensed irrigator and a licensed chemical applicator on staff.

Off-season, Barbero keeps those who want to work busy removing snow from commercial properties. An average snow year might call out nine Real Estate Maintenance Co. plows 10 or 12 times for snowfalls in the 2- to 3-inch range.

This winter also saw the introduction of a new service, a business franchise called Christmas Decor. Like snow plowing, the new venture will work to extend Real Estate Maintenance Co.'s season, in this instance with the installation of Christmas lights, garlands, wreaths and other decorations.

"We're one of about 160 franchises nationwide," tells Barbero. "I think there is great potential in this market in both offering a service to current customers and maybe building a new customer base among high-end homeowners."

Like any lawn maintenance contractor will tell you, the key to continued success and growth is its employee base. Barbero can't say enough about his employees: 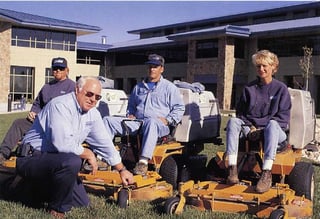 With employees in place, with equipment, with new services and with his contacts, this owner has set the stage for steady growth for the next several years. In fact, there soon might be room for a new 25-hp Walker with a wide-area deck.

"If the mower had been available when I started the business, I would have purchased it," says Barbero. "But right now I'm set."

But things change. Even 12- year-old Walkers have their limitations.