There are not many high school baseball fields around the country that look and play like the one in Nitro, West Virginia. Brandon Matthew Sneed Field hosts more than 100 baseball games a year and truly sets the bar high for other baseball fields in the state. Fitting enough, the field is home to one of the state’s top high school baseball teams, and it has become a showcase for the community of 35,000 residents.

The field was constructed in 1995 in memory of star athlete Brandon Sneed who was killed in an auto accident. The design and construction of the field was a total community effort, sponsored entirely by private funds. Since then, its maintenance has been the responsibility of volunteers who care for the field like it is their own. Brandon’s father Dave, a school planner and architect, designed the field and is one of a group of three dedicated volunteers who oversee field improvements and maintenance.

“From the very start, the field has been a complete community effort, and it seems to generate more interest and enthusiasm as years go by,” says Dave. “Our high school, from the school principal and athletic director on down, has been very supportive, as has virtually every member of the community.”

From Bullpen to Grounds Crew

The volunteers head up the ongoing fundraising effort to keep the field operating, and provide the muscle to keep it maintained. In addition to Dave, the group, known as the “Bullpen,” includes Bruce Adkins, Interim Director for the state’s Division of Tobacco Prevention, and local retiree Steve Lykins, affectionately known as Dr. Dirt. 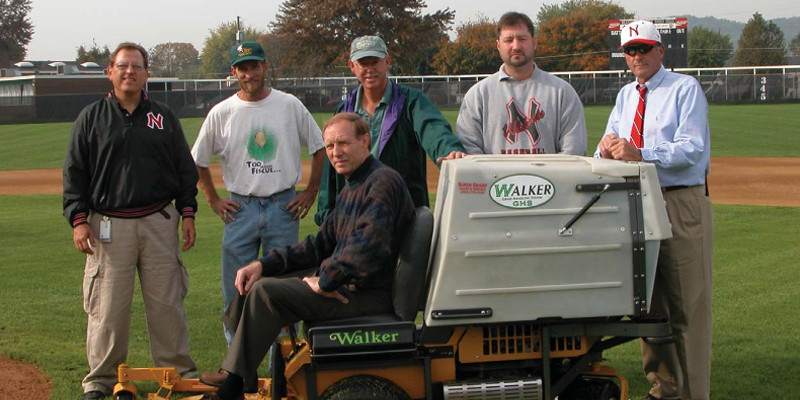 “The magic that makes this project work is also one of our major challenges,” relates Steve. “Since we are an all-volunteer operation, we don’t have a trained or experienced staff to help answer turf questions or to pitch in with maintenance duties. Hence, we have been very careful from the beginning to do everything to the best of our abilities. As they say, ‘There’s never time to do it right, but always time to do it over.’”

Over the years, the group has looked to Virginia Tech and Landscape Supply in Roanoke, Virginia, to answer questions about the outfield comprised of turf-type tall Fescue and 10% Bluegrass and the Bluegrass/Perennial Rye grass mix infield. An in-ground irrigation system helps keep the grass green, while also watering down a dusty infield between innings. The county employed a local contractor to maintain the field until four years ago when Dave’s group purchased a Walker Mower.

According to Steve, the contractor just wasn’t doing the mowing job that the group wanted. After spending countless hours on the Internet researching mowers, the “Bullpen” finally decided they needed a Walker Mower, and struck a deal with the county. The county put up half the money to purchase the mower (the money it would save by not having the contractor do the mowing) and the group put up the other half.

“At first, the school just couldn’t figure out why we spent $11,000 on a mower, but the machine has turned out to do everything we wanted it to do,” Steve remarks. “It’s a workhorse — it stripes and collects the grass.” Dave agrees, noting that the 26-hp mower, equipped with a 48-inch deck and large hopper, is also fun to operate. “I find myself sneaking over here early in the morning to do some mowing. It is almost as if the three of us compete to see who gets to operate it. I can’t imagine another mower being easier to operate.”

The machine gets a workout. In addition to mowing the field three or four times a week, the volunteer crew uses the Walker to dethatch, and has even equipped it with a boom sprayer. From time to time, the mower is recruited to drag the infield.

Dr. Dirt keeps a watchful eye on both the infield and outfield, fertilizing the field five times a year with an organic fertilizer, and adjusting the mower deck to take no more than 1/3 of the grass plant off with every mowing.

“Our biggest maintenance challenge is not the playing field,” he notes. “Instead, it involves the hightraffic areas around the coach’s boxes and in front of the dugouts. Since the field hosts so many games throughout the season, from early spring to late fall, just striping the field and getting it ready for games keeps us all busy, too.”

The Bullpen crew doesn’t mind, though. In fact, the busier the field is, the better they feel. “We are building something special here for the community,” Steve adds. “Every year, we strive to improve the field in some way. We recently installed some new landscaping, and plans are in the works for lining the outfield border with pine trees. A practice field is under development, too, thanks to the effort of a nearby technical school that is using its construction as an opportunity to train students.”

There’s no question Nitro has something special going on, and it transcends the lush, green infield and outfield turf that rivals any high school field in the country. The field has become a focal point, not to mention an example of how a tragic accident can bring together an entire community to make something that is not only a lasting memory, but something that everyone can enjoy.