Independence is more than a state of mind

Darwin Haerer Sr. positions his wheelchair next to his Walker Mower. He places a hinged board between the mower and his chair and slides across it to the mower’s seat. “There,” he says. “I’m ready to mow.” 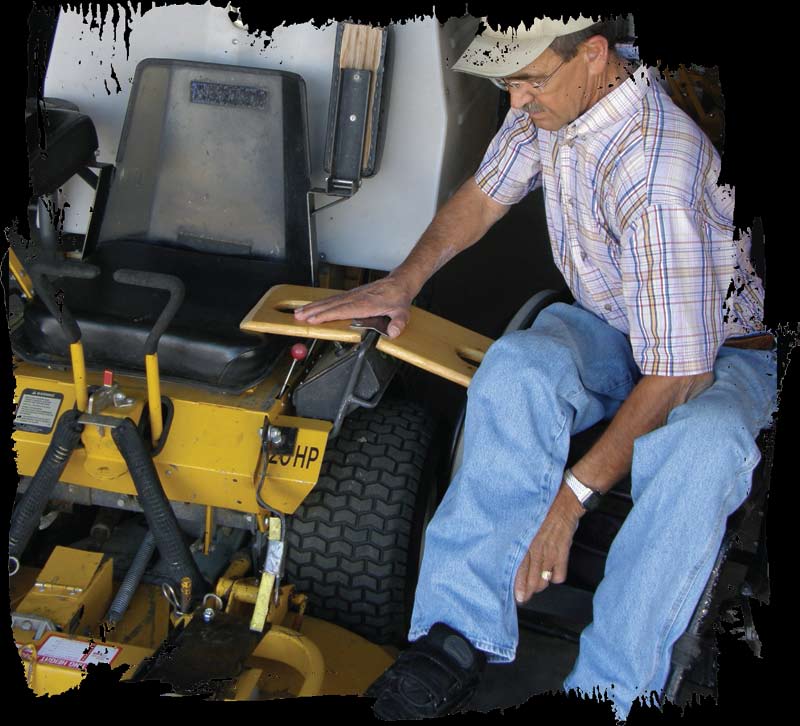 The owner of DHD Construction Inc. in Wall, South Dakota, has more on his plate than mowing, though. He and his son, Darwin Jr., operate a general contracting company that employs eight people and builds a variety of commercial and residential structures in and around Rapid City.

Darwin Sr. maintains the financial end of the business from his home in nearby Wall, while his son manages the operations end from Rapid City. When not concentrating on business—or mowing his lawn and those of his two neighbors—Haerer can be found running errands in his van, or maybe he and his wife, Betty, will be off camping and four-wheeling across the rugged Badlands.

“It doesn’t take long for life to change,” Haerer relates, noting that before a serious injury in April 1996, he operated a trucking company that hauled cattle and grain throughout a five-state area. Going further back, this South Dakota native was raised on a ranch and lived the life of a real cowboy until meeting his wife in 1973 and getting married a year later. Prior to starting his trucking company, he had worked on a 12,000-acre ranch, managed a 30,000-head sheep feedlot and drove a cattle truck.

Haerer maneuvers his chair through the living room and points to a breathtaking view overlooking the Badlands. “I can spend hours here watching coyotes chasing down prey in the wintertime,” he says. He then recalls the days when he and his brother would drive cattle from pasture to pasture and spend evenings camping out under the stars. With ranching in his blood, Haerer attended Western Iowa Tech to study ranch management, and later worked as a cowboy until “settling down.” 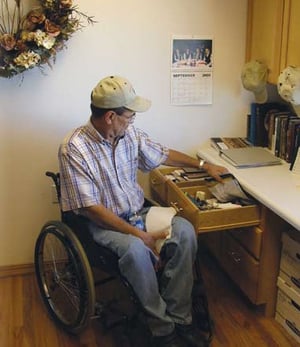 “My injury was caused by a freak accident,” Haerer explains. “I was hauling grain at the time. Before loading, I positioned the auger, stood up and backed into a turning power-take-off shaft. The grease fitting on the shaft caught my shirt right behind my neck, wound me up and threw me 40 feet away. The accident severed my spinal cord, and ultimately my C-five, C-six and C-seven vertebras had to be fused.”

Haerer spent the next four months in a Rapid City hospital. “The doctors told me that nine out of 10 people never survive the injury I suffered,” he says. “They also said that I would never drive, walk or work again.

“Betty and I had a heart-toheart talk shortly after I returned home and agreed that this was no way to live,” Haerer continues. “We inquired about going to the Craig Institute in Denver where doctors specialize in spinal cord injuries. After an evaluation, they admitted me. I spent a month learning how to get the most out of what my body could give me. In fact, I was driving a specially designed car within the first week of my stay.”

For the better part of the next 12 years, the Haerer family, including Darwin Jr. and his sister, Mindy, worked together to help their dad gain as much independence as possible. They constructed a new handicappedaccessible house nine years ago and outfitted it to accommodate a wheelchair. A hoist chair allows Betty to lift her husband into a whirlpool. Since the accident, Darwin Sr. has purchased two specially designed vans.

Thanks in large part to the Craig Institute, the former cowboy, ranch manager and truck driver lives a very full life. Haerer combined grain for two summers (he helped configure a lift to get into the combine’s cab) and began mowing his lawn, first with his retooled Craftsman and later in 2003 when he purchased a used Walker Mower from the Walker dealer in the area, Dale and Karen Lee, located in Gordon, Nebraska. With his wife, Betty, he also operated a 300-head cattle ranch until two years ago.

“Since the accident I’ve been constantly looking for ways to reduce my dependence on others,” Haerer emphasizes. “Betty has been absolutely incredible, as have my son and daughter. But I have to continue to look for ways to limit what they do for me. The Walker Mower is a good example. I could mow with the Craftsman, and later with my John Deere garden tractor, but I couldn’t clean the deck, nor could I dump the clippings from a lawn rake that I pulled.

“Then, a few years ago, I attended a stock show and saw a Walker Mower at one of the exhibits. The raised deck caught my eye immediately and the seat looked low enough for me to scoot across from my wheelchair. The best feature was the electric dump. I spent two hours in the booth and mulled over buying the machine for another two months.” 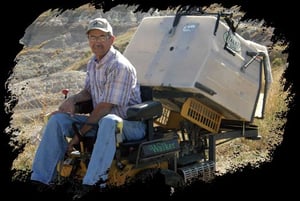 Haerer said he couldn’t justify buying a new Walker Mower, but he could buy a used one. So that’s just what he did when his dealer called the following spring. Since then he has customized the machine with a longer speed control handle, support for his legs, foot rests and a winch to help raise the deck for cleaning and blade changing.

“I haven’t had a bit of trouble with the mower and I enjoy driving it,” Haerer relates, while noting that being independent can be troublesome. He recalls an incident when he was guiding his John Deere garden tractor out of the shop while riding his electric wheelchair.

“The wheelchair hit a muddy spot and was stuck,” Haerer tells. “Before I could stop the rider, it took off on its own. Imagine, sitting in my wheelchair and the garden tractor making tracks for who knows where. Well, I called Betty at work with my cell phone and waited … and waited some more. While she was caught in traffic, the runaway tractor meandered around the property, first toward a neighbor’s barn. Then it hit a few ruts, turned and headed for a busy highway. It hit a few more ruts and turned again, this time coming back within 10 feet of me.” Haerer says it might as well have been 10 miles for all the good it did him. Off it continued, until Betty came barreling in and corralled it.

Haerer has a dozen or more misadventures under his belt, including the time(s) he was thrown off his fourwheeler and the incident when he fell from his van while trying to get on his garden tractor. “Betty and I usually end up laughing about how ridiculous the situation is,” he says. “Listen, one has to have a sense of humor.”

One has to work, too, Haerer adds. When his son graduated from college five years ago, the two formed DHD Construction. The business has grown steadily, with plenty of work and equipment to get it done. Senior is proud of his son, and enjoys talking about his many attributes, not the least of which was learning to drive a “semi” at the tender age of 10. Daughter Mindy gets accolades, too, as does Betty. “We’re a tight family,” Haerer says. “We were tight before the accident and we’re probably tighter now. God spared me for a reason, but I have yet to find out what that reason is.” What he doesn’t know, his family does.