It all adds up in Guam

You don’t have to look very hard at Aaron Loerzel’s truck to know he is up against some tough conditions running a mowing business on the South Pacific island and United States territory of Guam. “It was a brand new truck,” he relates while pointing to the rusted pock marks that are plentifully scattered over the entire truck. “A typhoon came through here and bead-blasted the truck, and it didn’t take long for the humidity to rust out the dents.”

That was the typhoon that came through in 2003 and had winds measuring 236 mph. “At least that was what the gauge was registering when it broke,” Loerzel adds. “We were out of electricity and fuel for almost two months because of that storm,” he says while explaining that a fuel storage tank in the harbor was destroyed and burned, causing a major fuel shortage.

Throw in the fact that two to six typhoons pass through each year and destroy most of the tall trees and you have a formula for opportunity, according to Loerzel. He has certainly grabbed a hold of the opportunities by not running a typical mowing business, and has made a living by conforming to the needs of his customers. Loerzel likes to reach beyond dependability for his customers and offer additional services that may be hard to find. 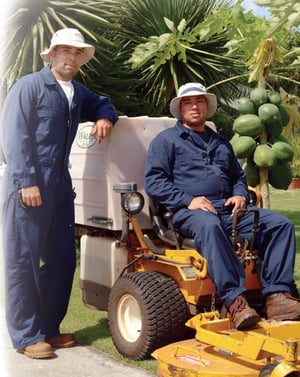 “I bought a backhoe a few years ago,” he explains. “Now, after a typhoon, my customers know that I have the ability to show up with my backhoe and help them clean their properties.” Of course, after a typhoon, the backhoe makes him quite popular with everyone, but he says he makes a careful effort to service his established customers first. He has also added roof sealing to his repertoire to help protect homes from the brutal tropical sun during the hot season. Even with all of his innovative ideas, Loerzel says the real formula for success on Guam is easy: “You just have to show up each week.” He laughs while explaining that many of the region’s cutters have a tendency to mow a yard once and are never heard from again.

How does a young man in his twenties gain an appreciation for good equipment on a remote island? Loerzel has a quick answer: “I have loved power equipment since I was two.” He says that the combination of watching his father (a doctor by profession) hobby farm while growing up, along with being fascinated by equipment, seemed to help direct some of his decisions. One of those decisions was to work during high school with Mowil Inc. (the Walker distributor on Guam). Loerzel credits Albert and Harumi Eliason with teaching him good business sense and allowing him to gain experience around equipment.

This experience was put on relative hold when Loerzel went to Seattle for college. But he says he always had an itch for equipment, so he knew his degree in finance would never get fully exercised. Interestingly enough, Loerzel does use his degree for the local H&R Block during the busy tax season, but he says it is not nearly as rewarding as getting out and mowing lawns. “In accounting, I can have a stack of completed forms this thick at the end of the day,” he says while holding his index finger and thumb a couple inches apart. “But I feel like I can have a lot more to show in just half a day of mowing.”

Loerzel says that upon his return from college in ’98, he still felt an urge to work outside, so his choice of mowing equipment was elementary. “Based on what I knew about the Walker from working at Mowil and the support I would receive from them,” Loerzel shares, “it was a pretty easy decision to go with the Walker.” He says the Walker’s combination of being versatile and rugged has served him well. “I feel sorry for mowers here; they take a beating,” he explains referring to the coral soil conditions and aggressive Zoysia grass. 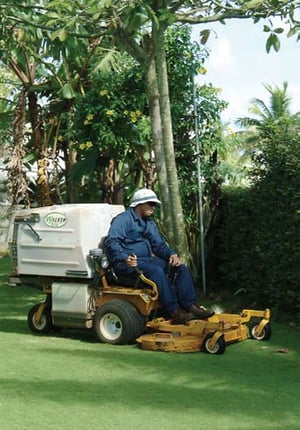 Add in the Walker’s ability to vacuum the different types of leaves that find their way to the ground after a typhoon and Loerzel says it is the perfect machine for him. The leaves of the breadfruit tree (that typically measure 12-by-36 inches) and the skinny, evasive leaves of the Kafu (pronounced kah-foo) tree are no challenge for the Walker, according to Loerzel. He sums it up in one simple phrase: “There’s not another kind of mower on this island that will make a yard look like a Walker can.”

Loerzel says his future includes a few dreams, including an interest in opening a green-cycling site and ultimately getting into road construction — an offshoot of his love for equipment. With Aaron Loerzel, it’s easy to see whether he works on the books or in the yards, his knack for focusing on the positive and seizing opportunity will always keep him well-balanced.