When he moved to Las Vegas 20 years ago, a gravel road provided access to his home. Not anymore. His house, less than 10 minutes from the famous Strip, is now located on a main boulevard. The city has grown incrementally and so too have the huge hotels and casinos that fuel the growth engine. 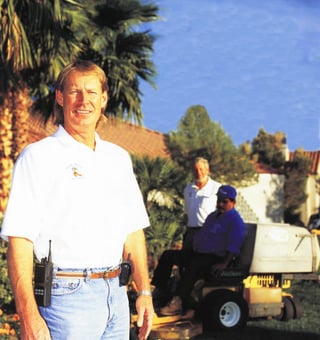 "Twenty years ago, no one could imagine growth like this," tells Lake. "Back then this was a small city. Today, this is a big city by any standard and the growth continues at breakneck speed."

The advent of modern "Vegas" with its 3,000-room hotels has created unique opportunities for anyone who wants to work, he explains. Employment abounds for hotel and casino support staff, for construction workers, for taxi drivers, and for just about anyone who is in the service business, including landscape contractors.

In business for nearly 20 years, Ocean Front has grown like the city. The first year in business, Lake generated $1,400 a month in revenue. Today, he owns and operates a S2 million-plus operation and he says he had so much work last year he turned down close to S300,000 worth of new jobs. His primary customers are apartment complexes and condominiums. He provides full landscape maintenance services to at least 40 such properties which include mowing 170 acres of grass weekly.

Before you get too excited and move to Vegas, consider this. The fescue that Lake's crews mow is more at home in any environment other than the desert. Irrigation is literally a way of life for this plant life and only a couple of days without water will put it into permanent dormancy.

The properties themselves are tightly configured. Adorned with shrubs, flowers and palm trees, as well as grass, they provide a veritable obstacle course for mowing equipment. Not to mention the small berms that combine with any number of nooks and crannies to spice up the maintenance operation.

Then there is the employee situation. With all of the work in Las Vegas, finding and keeping employees may be the most challenging of all aspects for business owners like Lake.

There are other considerations, as well. Take traffic. The incredible growth in resident population (between 1,200 and 1,400 new homes each month), plus the constant influx of visitors, make left-hand turns a near impossibility, says Lake. As he puts it, time is money in this business and savvy contractors can't have crews sitting at lights waiting for the green arrow. For his part, Lake personally routes each of three mowing crews to avoid time-killing left-hand turns.

Like most any market, Las Vegas has its share of price cutters, too. This unique patchwork of elements - man-made and natural - combines to make the Vegas market a challenging one, indeed.

"This is not a market for people who want to cut their teeth in landscaping," Lake emphasizes. "This is a tough environment and it takes experienced people to make a go of it." 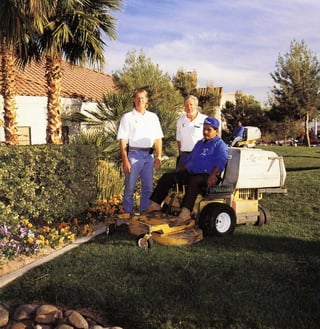 Mike Lake's story is not unlike that of many others who one day find themselves stranded in Vegas without money. In Lake's case, however, he didn't lose his money gambling. No, the company he was working for went out of business and he was left with no job and little money. Familiar with the city, he knew he could find work if he just applied himself. He did, in an entrepreneurial sort of way. Lake started a small odd jobs company called Rent-a-Husband and supplemented his income dealing on a "craps" table. He later bought a small landscape company, and the rest is history.

In no time the small contracting business grew from $1,400 a month to $40,000. After that initial spurt, Ocean Front (a name taken from his previous address in California) leveled off at a 20 percent per annum growth rate. Today, in addition to generating more than $2 million in sales, the company employs 65 people, operates 20 vehicles and has a broad array of equipment that includes 13 Walker mowers.

Ocean Front has survived, even thrived, in the tough working conditions in Vegas, thanks to hard work and sound business practices. On the management side, the company employs a unique blend of supervisors, on-site foremen and mowing crews that combine to provide timely service to customers.

Three supervisors, one each for the east, west and south sides of town, act as managers for Lake. Without them, it would be impossible to do the volume of work the company does, he adds.

The foremen and mowing crews share an important role, as well. The foremen are on individual properties year-round, performing routine maintenance tasks and, more importantly, making themselves available for emergency service, e.g., to fix a broken sprinkler head or spruce up a property for visitors. If the Ocean Front office receives a call from a property manager, it simply relays the call to the supervisor who delivers immediate service.

Mowing crews visit each property weekly from March through the end of November. During the winter, they back down to a bi-weekly schedule.

"I like to say our crews mow Las Vegas," tells Lake, adding the Walkers give his crews the ability and agility to mow the tight spaces that comprise so many of the properties.

Lake purchased his first. Walker in 1984 (a used chain drive unit). "I really couldn't afford it at the time," he explains. "But I was so amazed with its performance, I immediately bought another one." If he couldn't afford the first one, the second one really put him over the edge. And he adds succinctly, ''All these machines have done since I bought the first two is save me money."

To be sure. He has since sold both original units for more than he paid for them. Not a bad return on investment. Still, the sales represent only a fraction of his real savings which, he explains, are measured in time saved on the jobs.

This owner is a self-confessed time fanatic. He knows to the minute how long it takes to drive to each property, to mow the property, to edge and trim, to check sprinkler systems and to blow a property. He doesn't do it for his health; he does it for the health of his business. The area is so competitive, he adds, there's always someone out there trying to underbid the job. If you can't mow and maintain a job competitively, you can't compete.

"I wouldn't be in business today without the Walkers. I wouldn't be able to compete against the 'lowbailers."' By using the Walkers, Ocean Front crews kill the proverbial two birds with one stone. They get jobs done faster, a lot faster, and they save on mowing with push mowers, which reduces labor costs. The push mowers are still used for really tight spaces and island areas, but that's about it, tells Lake. 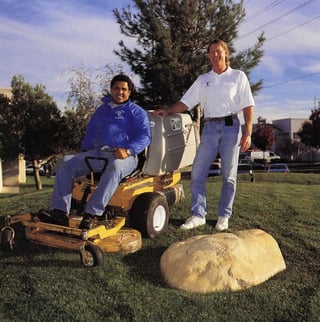 To keep his Walkers running in top shape, Lake follows a strict preventive maintenance regimen. After each workday, crews clean the air filters, clean around the engine and change the mower blades. At the end of each week they grease the mowers and change the oil. And twice yearly they upgrade belts and pulleys and give the engines a thorough going over. The schedule pays off. With a little care, says Lake, the mowers are "bullet proof".

The care is extremely important, he emphasizes, especially in the Las Vegas heat and dust. He points to little dry patches that characterize turf that borders concrete and blacktop areas. "The heat is so intense, maybe around 150 degrees near the blacktop areas, the grass just can't stand it." Just think what the same extreme temperatures, when combined with dust and dirt, can do to engines.

Ocean Front runs all gas-powered Walkers. Mulching decks are used most of the growing season except in the spring when grass is the most succulent.

Change is a way of life in Las Vegas and contractors simply have to live with it. Lake has trained seven of his competitors and no doubt more are in training. Yet competition is a way of life in any market. More of a threat to his operation is the severe climate and unrelenting population growth that puts a strain on existing water supplies. Water prices are going up, way up, and already customers are looking for ways to reduce turf areas.

"I can say with a degree of certainty that this is the most grass you will ever see in Las Vegas," explains Lake. "The trend today is to put in more desert landscape and less grass."

To accommodate the trend, Ocean Front has created a new division to remove sod and replace it with sand, rocks and native flora. That's a good news/bad news scenario. The move generates more short-term work, but it means a loss of work for mowing crews later on.

Yet the impact on Ocean Front crews and their Walkers won't be felt for years to come. In the meantime, there's plenty of mowing and mulching to be done.