The best-kept secret in Fargo

"My competitors always ask me how we can maintain so many accounts," says Ryan Such, owner of All Terrain Grounds Maintenance in Fargo, North Dakota. "The answer is really our Walker Mowers, but I'll let them figure it out for themselves. In fact, I think the Walkers are the best-kept secret in town." 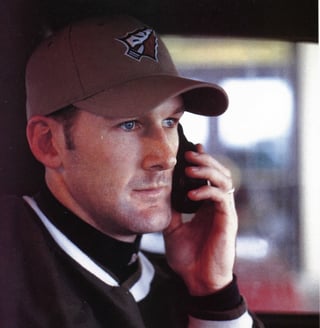 Oh well, the cat's out of the bag. Such has been mowing and maintaining properties in Fargo since he was 14. Today, he maintains in the neighborhood of 150 properties, a third of which are full-service accounts - meaning he performs all the maintenance including mowing, weed control, fertilizing, sprinkler maintenance and snow removal.

The majority of his accounts are multi-family housing units and grade-A commercial properties although he still maintains a number of upscale residential properties. He gets them all done with two full-time employees, four part-timers and four Walker Mowers.

"We have picky customers," 'Such relates. "But that's the way I like it. The pickier the better. Customers who care about their properties appreciate the work we do, and do the little things when we're not there that just makes maintenance easier.

"My motto is simply 'care about the little things.' This is not rocket science. We double check properties, blow off the drives, make sure to remove rain gutters and sump pump hoses before mowing and replacing them afterward, and be as responsive as possible to our customers. I can remember early in my career calling four different sprinkler system companies and only one called me back. That was real annoying, and I vowed my customers would never experience a similar lack of response from my company."

Throughout high school, Such worked for his hockey coach who also operated a lawn maintenance business. After graduating, he pursued a degree in law enforcement while still maintaining lawns. early four years ago, he went to work for All Terrain, and last year purchased the maintenance and snow removal business from the owner. This past year he was offered a position with the Minnesota state police, but turned it down in favor of his new business.

"There is so much potential in lawn maintenance and lawn care," he relates. "It's also nice being able to have the freedom to take time off when you want or when time is available."

As for any lawn maintenance business, time is a premium for All Terrain. The growing season may not be as long in North Dakota as it is in other parts of the country, but the winters more than make up for it.

As explained by Such, crews go out after virtually every snow, if for no other reason than to apply de-icer. If accumulation is over a half inch, they then blow and plow the white stuff. Usually, that means going out 15 to 20 times a year or more, enough to keep crews busy. 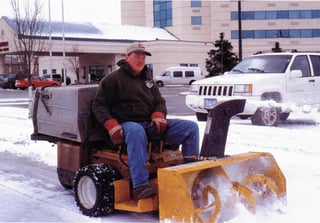 Two of the company's four Walker Mowers are equipped with snow blowers. One goes out with a crew; the other stays behind as a backup.

"The snowblower is the perfect width for clearing sidewalks and drives," tells Such. "And we have a lot of walks to clear. In fact, I estimate that we blow somewhere between eight and ten miles of sidewalk after each snow." In one housing development alone, the sidewalk stretches for more than a mile in each direction, he adds.

The two Walkers with snow blower attachments were with the company when Such purchased it. He bought two more last summer - in his words because he can "finish jobs quicker and the mowers leave a nice cut."

Equipped with 20-hp engines, 48-inch GHS decks and large catcher boxes, the two new Walkers also give Such an advantage over competition by allowing him to underbid competition without sacrificing quality. As he puts it, "My hourly rate is the same as the competition. But with the Walkers I simply get the work done faster." He plans to make it tougher on competition next year by purchasing two more Walkers.

Although a business owner for less than two years, Such has several years experience managing a lawn care/lawn maintenance operation. He says the most difficult part of his job is in the spring figuring out schedules for his employees. They want to work at least 40 hours and they're willing to put in overtime, but a steady diet of 55 hours is not acceptable. During the growing season, crews work four 10-hour days, with the fifth day in reserve as a rain day. "I've seen too many companies fill their entire week up with work and then when it rains they get behind," he relates. "The key is to stay comfortably busy." 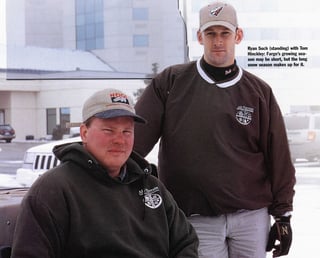 Finding this level of comfort is even more challenging with snow removal. If spring is the most difficult for Such, winter is the most stressful. As he describes, the window to get the work done is very small, and customers can be demanding.

All Terrain is literally barraged every year to do more snow removal.

In fact, Such turns down somewhere between 150 and 200 snow accounts annually. "The last thing a contractor wants to do is put on more trucks and hire more people in the winter than he can use in the spring. We try to stay around the two to three crew size all year long."

In addition to the Walker Mowers, All Terrain's snow lineup includes three plow trucks and a new Bobcat skid steer with a bucket attachment and snow blower. early all of the company's snow properties are full service accounts. Snow removal, along with other maintenance services, are pro-rated over a 12-month period and billed monthly.

"Customers pay a flat snow removal fee," Such explains. "If it snows more than 60 inches during the season, the fee is adjusted as a percentage of their contract." As stressful as it is, Such admits snow removal allows him to guarantee winter hours for his employees."

And speaking of employees, the Fargo job market is tight, with unemployment in the 1% to 2% range. There are plenty of jobs in the area in the $20,000 to $25,000 range which puts even more pressure on companies like All Terrain in both hiring and retaining employees.

"I've found that you have to do a number of things to keep employees interested and make it easy for them to get along," Such explains. "We go hunting together, play broomball and fantasy football as a group, and have lake outings or play in a golf tournament. All work to foster team spirit."

All Terrain workers also get a cell phone ($50 a month value) and after a year of employment, receive 401k-like benefits, along with health insurance.

Still, keeping employees is a tough row to hoe in Fargo and in other parts of the country. It requires companies like All Terrain to always put their most competitive foot forward and maintain a good working environment - without, of course, letting out any company secrets.