The price is right!

How much do you charge for your services? Do you have a minimum fee for maintaining a property? What criteria do you use when coming up with a pricing strategy? Do you have a different pricing strategy for different customers or when using different pieces of equipment? These are just a few of the questions Walker Mfg. asked in a survey sent to a random sample of 2,000 Walker Mower users in September 2002. More than 400 contractors responded to the survey. The results follow.

The two key questions on the survey asked Walker users how they priced their mowing/maintenance service and what rate they charged customers. Nearly 85% of the respondents reported that they priced their services by the hour vs. by the square foot or other method. The average hourly rate for Walker users across the country was $37.75/hr. Companies in the North Central states charged the most for their services ($39.51/hr) compared to those in the South Central and Mountain states who charged the least at an average rate of $34.78/hr.

According to survey results, the least-experienced contractors charged more for their services than their more experienced counterparts. Contractors who had been in business less than a year reported that they charged an average of $38.75 for their services compared to an average rate of $37.91 for those who had been in business longer than 15 years. 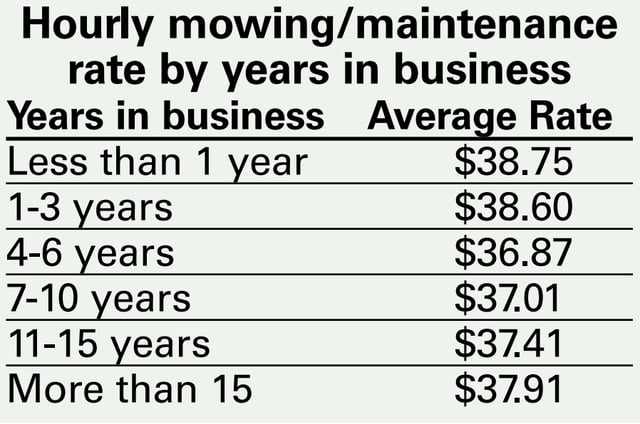 Despite the relative parity in pricing across the country and among firms with different levels of experience, survey results indicated that there are extremes in the marketplace. One contractor, for example, charged only $15/hr for his mowing/maintenance services whereas another checked in at the other end of the spectrum with an hourly rate of $100. More than 87% of survey respondents have a minimum charge for their mowing/maintenance service. The average minimum charge was $31.72.

When contractors were asked what they based their pricing strategy on, 43% indicated it was based strictly on costs plus desired profit. The other 57% also weighed competition, customer perceived value, and other factors such as the age of their customers. Among these respondents, nearly 75% indicated that competition played a significant role in their pricing strategy. And slightly more than half reported that customer perceived value played an important part, as well.

More than 2/3 of the respondents kept their pricing strategy as simple as possible, charging the same rate for all their customers, for operating different pieces of mowing/maintenance equipment, and for handling clippings in different ways. For the 32% who charged a different rate for their equipment, the average price for operating their Walkers was $42.52/hr vs. $36.48/hr for using other riders, $34.48/hr for mowing with mid-size walk mowers, $29.48/hr for operating handheld equipment and $28.40/hr for using trim mowers.

More than half of the Walker users surveyed provided aeration, dethatching and bed edging services. They charged an average of $52.62/hr for aeration, $48.07/hr for dethatching, and $36.98/hr for edging beds.

In any survey, there are responses that fall far out of the normal response range. To lessen their impact on results, researchers oftentimes use “median” instead of “average” figures to report results. A median figure, as the name implies, is the midpoint of the response range. It is the figure at which there were an equal number of respondents who reported a higher amount and a lower amount. Keep this in mind when comparing this pricing survey to your operation.

Respondents reported owning Walker Mowers for 4.7 years, and they service a mix of accounts heavily weighted toward residential. The average contractor services 78 accounts consisting of 16 commercial, 61 residential and possibly one municipal/institutional account. The average operator owns two Walkers and mows 33 weeks out of the year. Slightly more than 1/3 of the respondents mowed between 6 and 20 acres a week; slightly less than 1/3 mowed between 21 and 50 acres a week with their Walkers. Geographically speaking, responses were spread nearly evenly across the country, with the highest representation coming from contractors in the South Atlantic and East South Central portion of the country and the fewest from the Pacific Coast region.

Know Your Overhead Before You Set Price

Although more than half of the respondents in the pricing survey indicated they took factors other than their costs and desired profit into consideration before setting their price rate, most of the contractors would also admit that covering their costs has to be their primary concern. If it isn’t, they won’t be in business long, according to one survey respondent.

“There’s no question your market and your competition weighs in on your pricing strategy,” relates Tim Rummins, president of Hartville Nursery in Canton, Ohio. “But you have to know your overhead.”

There are several areas where contractors can underestimate their overhead, he adds. “If we mow a church or perform another community service for free, there is a cost tied to it and it becomes part of our overhead.” Rummins, whose company has been in business 24 years, says knowing their full labor burden can present another challenge for contractors, and all contractors should be recovering their equipment costs on every property they mow. For example, included in Hartville Nursery’s hourly rate is between $4 and $5 to cover the cost of operating its Walker Mowers, $9 for its truck, $0.50 for its string line trimmer and $0.65 for its backpack blower.

Arkansas contractor Gerald Paulton employs a similar approach when setting his hourly rate. “I want my Walker Mower to pay for itself by the 1,000-hour mark,” says Paulton.“If I paid $10,000 for the mower, my hourly rate would include $10 for operating the Walker. Five dollars of his hourly rate goes toward funding his retirement, $11 pays for his employees’ time (he works primarily through daylabor agencies) and he charges a per cubic-yard fee for hauling debris. His hourly rate also pays for taxes, including social security; gas, oil and equipment maintenance; transportation costs; downtime; and his profit.

In business since 1991, Paulton says it seems that everyone in Central Arkansas has a mower. “Especially within the last three years, we’ve seen a near 100% increase in the number of contractors in the maintenance business. There are literally hundreds of people mowing lawns and it has watered down the pricing.”To be competitive, he adds, you need to have a sharp pencil on both ends of the pricing spectrum.

You have to know how much it costs to operate your business, and you have to know how long it will take to complete a job. Paulton knows from experience that it takes him nine minutes to maintain 1,000 square feet of property. That includes the time it takes to mow, edge, trim, blow and clean flower beds. He doesn’t guess on square footage, either. He measures all of his properties with a “wheel” and includes the driveway, flower beds, and parking lots as well as the turf area. Virtually, the only thing he leaves out are the buildings.

With his measurement complete, he simply multiplies the time it will take to do the job by his hourly rate. If both are on the money, he will make money.

Paulton admits there are some intangibles that have to be accounted for when pricing a property, not the least of which are the numbers of obstacles on a property and, if those obstacles are trees, how many leaves they will be dropping in the fall. Canadian contractor Phil Dyck, coowner of Lawnmaster Services LTD in Alberta, uses a customized computer program to take even that guesswork out of pricing a job.

Dyck simply inputs property data into the computer, and within 45 seconds has the answer to how much time it will take to maintain the property. “We’ve timed everything we do,” Dyck explains. “The program takes into account the equipment we will be using on the property, square footage and obstacles. It even takes into account drive time, as well as loading and unloading time.

“We know how much revenue per hour per person we need to generate, and we simply multiply that figure by the computer-generated time.” Dyck says the program is beneficial from several vantage points. If a customer wants him to use a walk-behind mower instead of a rider, he simply plugs in the change and the computer generates a revised time schedule.

He tells the customer that the change will cost an extra two hours worth of labor, and he can actually show the customer the computer printout. The program gives inexperienced estimators an opportunity to accurately bid a property.

Successfully pricing a property, then, requires two accurate projections: 1) how much you need to make per hour (or square foot) to cover your direct operating costs plus overhead and make a profit, and 2) how long you think it will take to complete the job. The survey indicated that, on average, Walker users needed $37.75/hr to cover costs and make a profit maintaining properties. Presumably, they have tossed all their costs for the year into a basket, and divided them by how many hours they project to mow in a year. The final hourly rate is dictated by how much profit they want to or can make, depending on the market, customer and competition.

Of course, this sounds easier than it is. As Rummins points out, “things” can happen in a year to change projections. Mother Nature can toss a curve ball, there may be unexpected breakdowns, and your biggest customer may decide to go across the street. But no matter what surprises your competition, customers, or equipment spring on you, when you know and cover your overhead, your pricing will keep your doors open and allow you to be competitive in a healthy way.