“Until I find a better job”

Mel Taylor, owner of Mel’s Lawn Maintenance in Las Cruces, New Mexico, started mowing lawns part-time in 1984. At the time, he committed to this work until he found a better job. Twenty-three years later, he hasn’t found that elusive something that will give him as much pleasure and freedom as running his own business. 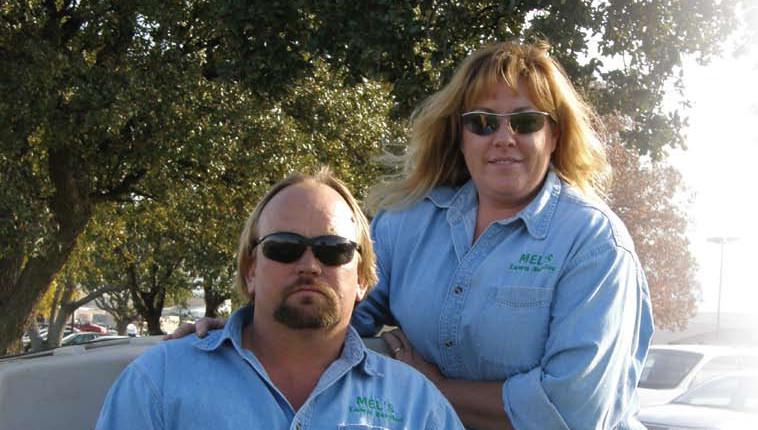 With wife Nancy and five children, Taylor lives in a subdivision just outside the Las Cruces city line. The front yard features a beautiful waterfall and pond the couple built last year. They have at least two cats that keep desert critters at bay, while five dogs share a large pen where Ranger, a herding dog, keeps his canine pals confined to a center location. Further back, a 30’ x 60’ shop houses three trailers and functions as headquarters for a thriving lawn maintenance operation.

“I started mowing lawns in the early ’80s with an electric mower and electric string-line trimmer,” Taylor recalls. “I burned out both of those units within a week.”

After replacing them with more durable gas-powered equipment, he embarked on what was to be a 10-year period of working summers and struggling to make a living during the short New Mexico off-season. Eventually tiring of the cycle, Taylor merged with another contractor in 1994, only to spend the next two years longing for the days when he was calling his own shots.

“Don’t get me wrong,” he says with a smile. “I learned an awful lot during those two years. The company worked year-round, doing cleanups and small landscaping projects in the winter. It also owned a used Walker Mower, which came in handy for the smaller residential properties. When I broke away and started my own business again, I began to diversify my service offering, and it didn’t take me long to purchase my first Walker Mower.”

Over the next several years, the now seasoned owner grew his business with a purpose. He restructured his service menu by offering year-round maintenance contracts. The move was especially attractive to smaller commercial properties, but many of his homeowner customers also took him up on the offer to keep their properties looking neat and clean all year long.

Taylor also became a licensed applicator which allowed him to kill weeds and use other control products. As Taylor and his crews visited up to 15 properties daily, his business partner and wife, Nancy, helped him with bookkeeping, worked on small landscape and enhancement projects, and changed out seasonal color for customers. 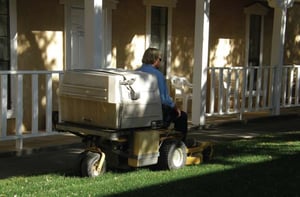 Walker Mowers became part of the equation when Taylor purchased the first of three 20-hp units in 1998, each equipped with a 36-inch GHS deck. “Honestly, I purchased a Walker Mower because it was the only zeroturn rider I could find that had the smaller deck, which is important for getting through gates,” Taylor explains. “I didn’t want to be one of those operators who purchased a big mower, only to have it sitting on the trailer because it couldn’t be used on smaller properties.” Later, he notes that the mower’s maneuverability, not to mention the fact that it tripled his output, led to the purchase of two more. He’s also thinking seriously about getting a larger deck for a couple of properties with long stretches of turf.

Mel’s Lawn Maintenance puts all three mowers to good use these days. His three crews maintain 150 commercial and residential sites in and around Las Cruces. In addition to the Walker Mowers, trailers are equipped with Stihl and Echo handheld products, along with Snapper 21-inch mowers for those especially small patches of turf.

“That’s one of the slightly disturbing trends in this part of the country,” Taylor admits. “In an attempt to conserve water, some property owners are changing out their turf for a more natural landscape, while new landscape construction often has a native look, too. I understand their motive, and it’s always best to be proactive when it comes to water.”

Nancy adds, “To be successful in this business, you have to be ready to change with the times. Our company has to be prepared to go where the market is going. Currently, we’re thinking about doing more hardscaping. Mel and I both enjoy these types of projects, and it only took us a few days to construct our small waterfall and pond. Still, maintenance will always be part of our operation.”

Her husband agrees. “Even though installing landscapes can be much more lucrative, maintenance is predictable, and it keeps a constant revenue flow coming in. Mowing lawns also gives us an entry for providing other services. Nancy and I want to be a little cautious about growth. I think we’re just about the right size. We would rather grow our service offering to current customers than overextend ourselves. You know, being big doesn’t always translate into being more profitable.”

Taylor continues, “When you think about it, mowing and landscaping is a luxury for most people. Because of that, it’s difficult to raise prices. Instead, we have to find ways to be more efficient, give more than we promise and be consistent.” 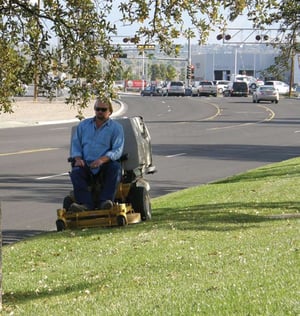 Taylor says the Las Cruces market is competitive with smaller startup companies always taking a piece of the pie. He admits to being there once, too. He calls it starting at the bottom and working his way up. He’s learned the ropes, though. The year-round accounts keep the money coming in and give veteran employees something to do during the slower months.

Taylor glances upward. “The leaves are a little late this year, but they will be falling soon,” he observes. “We mulch them and then pick them up with the Walker Mowers. Then, it’s only a couple of months of pruning, doing cleanups and finishing a few landscape projects before spring.”

Taylor’s phone rings… it’s one of his competitors. After he ends the conversation, Taylor explains that he and Nancy get along well with the competition. They often talk and even have lunch from time to time. Unusual? Maybe. But it’s something they’ll continue to do until they find a better job. Mel and Nancy stopped looking years ago.