The name gives away part of the story. Bash Lawns & Services does more, much more than mow lawns. Located 10 miles south of Findlay, Ohio, in the small community of Arlington, the company provides a myriad of services. The exact number wouldn’t be a surprise for a large, fullservice contactor, but certainly is for a small family-run operation that relies on a father/mother/son combination and a part-time employee to get all the work done.

“We try to accommodate most any customer need,” says Tim Bash, who with his wife, Laura, founded the company in 1996. “Doing so initially was a necessity for us. We were virtually unknown in the market so we mowed, mulched, installed beds, cleaned gutters and did just about anything a customer asked. Two years after starting the business, I obtained an applicator’s license, which extended our customer reach.”

“We’re versatile, too,” adds Laura. “It’s not only what the customer needs but what the customer wants. Not everyone wants or can afford a perfect lawn and landscape, so you have to be willing to provide different levels of service.”

Like many of their mowing and maintenance counterparts, the Bashes had not planned on becoming entrepreneurs. A job layoff for Tim was the dubious catalyst, after which he worked a short time for his landscape-contracting sister, Linda Maurer. “It was October,” Tim recalls. “I enjoyed the work and realized it was something I could do to make a living.” He formally launched his new enterprise the following year.

In the meantime, Laura had reentered the workforce to supplement the family income. Six months later, she quit her newly acquired bank job to join her husband in the field, spending most of her time on a mower. By the end of the first year, they had 30 mowing and several one-time customers.

Laura has since handed off the mowing to son, Ben, and part-time employee, Mark Phillips; eldest son Brad also worked in the business part-time prior to getting married. Laura now spends most of her time with bookkeeping and paperwork duties, although she is still available at a moment’s notice to operate a mower. Tim stays busy mulching, pruning, installing beds, aerating, fertilizing, and even doing some lawn rolling. In fact, a recent experimental promotion on Craigslist resulted in five rolling jobs from one contact.

Today, more than 80 fertilizer and mowing customers and another 80 miscellaneous aerating and cleanup customers, including one-time leaf cleanup properties in the fall, keep the team busy. 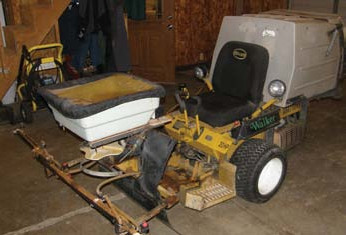 At first, brother and sister competed for a few of the same residential properties, “but it was nothing serious,” Tim says with a smile. What he remembers most about working with Linda and starting his own company was that he liked her Walker Mowers.

“The first ad we ran in the local newspaper showed me standing between my two Walkers Mowers,” Tim relates. “The 20-hp model was brand new and an 11-hp model was a demonstrator with only 50 hours on it. The mowers, with their grass-handling system and cut, gave us a point of difference.”

The Bashes still operate the 20-hp Walker Mower, and have added three 26-hp models—all with 48-inch GHS decks. They also own a 62-inch sidedischarge deck for a few larger-area properties. One of the mowers features a high-lift dump that Tim says comes in handy stacking leaves. Another is equipped with an automatic power dump.

Four attachments, including a bed shaper, Perfaerator, snow thrower and dethatcher enhance mower versatility. Three of the four machines have tallied well over 3,000 hours each.

The old saying, “A shoemaker’s son always goes barefoot,” doesn’t apply to this family. “Last August, we had a large gathering at our home,” Laura explains. “Many arriving guests asked the same question: ‘What is the name of this park?’ This made us feel good. In some ways, we are our best customer and work hard to keep our place looking nice. The Walker Mowers help tremendously, as we use them to mow, fertilize, control weeds, shape beds and cleanup leaves in the fall.”

The Bash homestead, with seven acres of turf to mow and several beautiful gardens, showcases the family’s ability to maintain a landscape. Unfortunately, an extremely competitive Findlay market, with some newspaper ads touting mowing for $10 or less, doesn’t always leave room to take advantage of it. 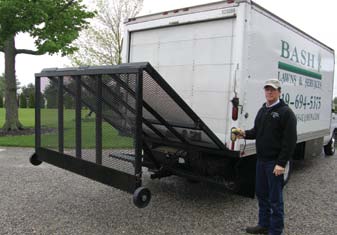 Being versatile and offering different levels of service is one way to be competitive. Another way is to reduce operating expenses, which Tim did early on by learning to repair his equipment.

“One of our first employees was an old friend and classmate, Wes Brown, who had a disability,” Tim relates. “He had lost a leg in an accident and was in need of a job. The disability, though, didn’t prevent him from operating a Walker Mower, and it just so happened that he was also a natural at fixing equipment.

“We began to repair our mowers and soon discovered they are very easy to work on,” Tim continues. “When I can’t fix something, my dealer, Amend’s in Rudolph, takes care of us. The town is 32 miles away, but it’s a trip we gladly take to pick up a part, and occasionally the dealer will stop by to drop off something we need.”

This contractor’s mechanical aptitude is evidenced in other areas. Tim built a hydraulic dumping system for his dump truck to handle grass clippings and leaves. It was replaced two years ago by a 22-hp Little Wonder truck loader. He added a hydraulic cylinder to his box truck to facilitate raising and lowering the ramp, and even configured a sprayer/spreader for his original 20-hp Walker Mower. He attached the spreader and boom to the mower’s utility hitch and housed the spray tank inside the dump box.

Tim also transformed a 40’ x 60’ barn constructed in 1992 to do double duty as a shop and home. The living quarters feature 1,300 square feet, with three bedrooms and plenty of space for the family to relax—when there’s time.

This spring was one of the wettest on record for the area. There were 46 days with precipitation, 23 in April and 23 in May. As a result, the Bashes spent more time than usual at home, waiting for the ground to dry out. When it did, they were off and running, making up for lost time and adding another dimension to Laura’s comment, “We’re versatile.”