Imagine simultaneously launching a lawn maintenance business and buying a new home while having only two customers, both non-paying. That’s what Jeff Nichols did in 2003 after quitting his job as a route salesperson for Frito-Lay. 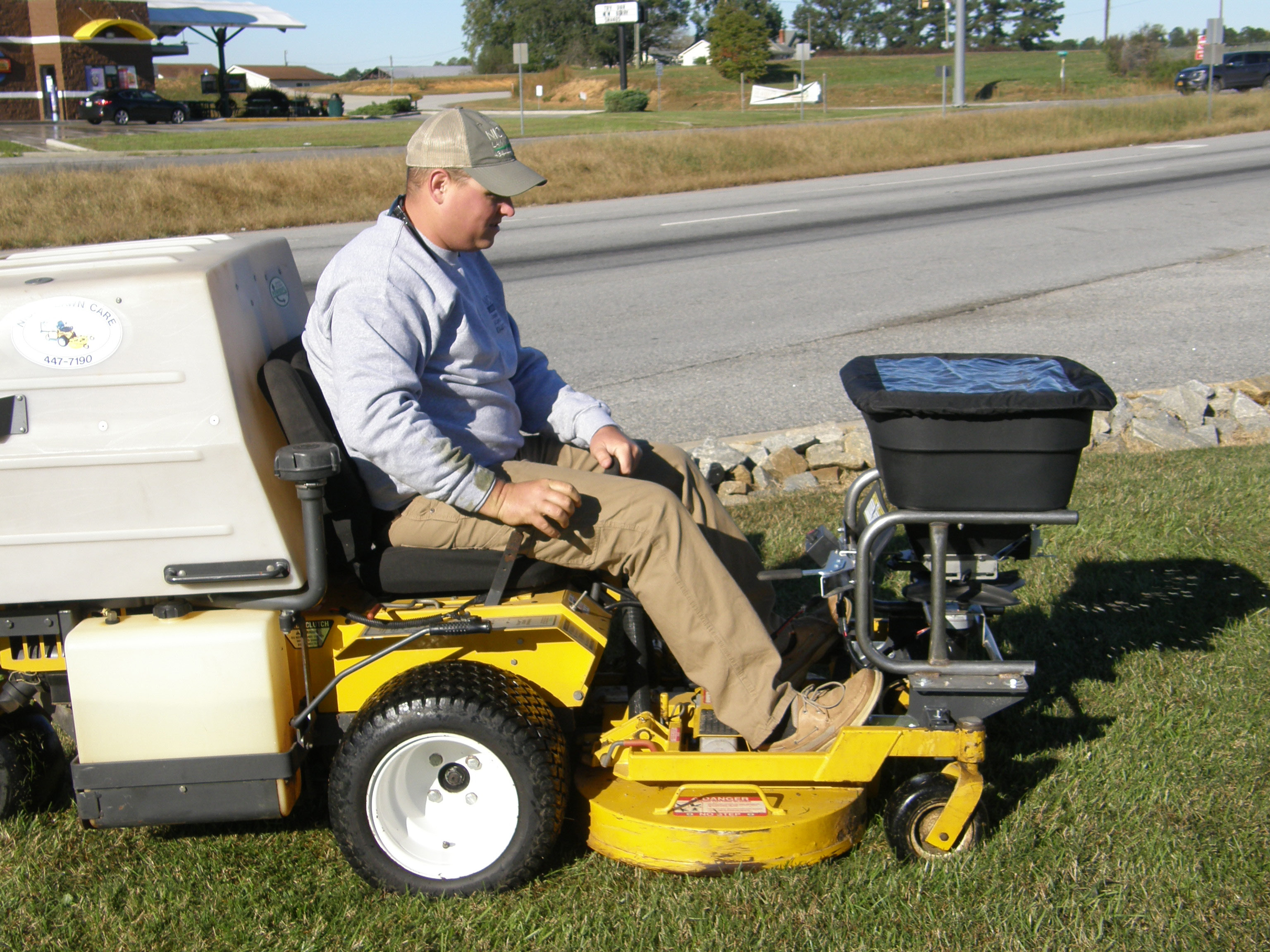 Jeff Nichols poses with his wife, Angela, who he says is the “backbone of the company.”

“It was time for me to do something else,” says Nichols. “I had been working seven days a week for 10 years. I liked to mow, and even had a Walker Mower for my own property and my father’s (the two non-payers). It was just a matter of getting more work.”

He did. Today, Nick’s Lawn Care in Brodnax, Virginia, has 85 customers, 75 percent of whom are commercial clients. In addition to providing full-service lawn maintenance, his company also installs landscaping, which accounts for approximately 40 percent of its annual revenue.

The company’s first large account was a cemetery in the neighboring town of South Hill, population 6,500. “The town took a chance on me. We did a good job and I believe the people who visited their loved ones in the cemetery noticed the difference in how we maintained it. With a population of 500, Brodnax is a suburb of South Hill. In both places, first impressions count. Word of mouth can make you or break you, especially in smaller communities,” says Nichols.

Still, it was a tenuous beginning. “I was very nervous at first, but Jeff said to have faith and pray. I prayed a lot,” adds his wife, Angela.

“I prefer commercial clients because they generally are less hands-on than homeowners and most are on yearly contracts, which means we have cash flow year around,” notes Nichols. “But we also maintain several properties on nearby Lake Gaston, along with some homeowners in and around town. My dad impressed upon me early on to not forget the smaller customers who helped us get started and we never will. The challenge, of course, is to increase the price for them as our costs go up.” 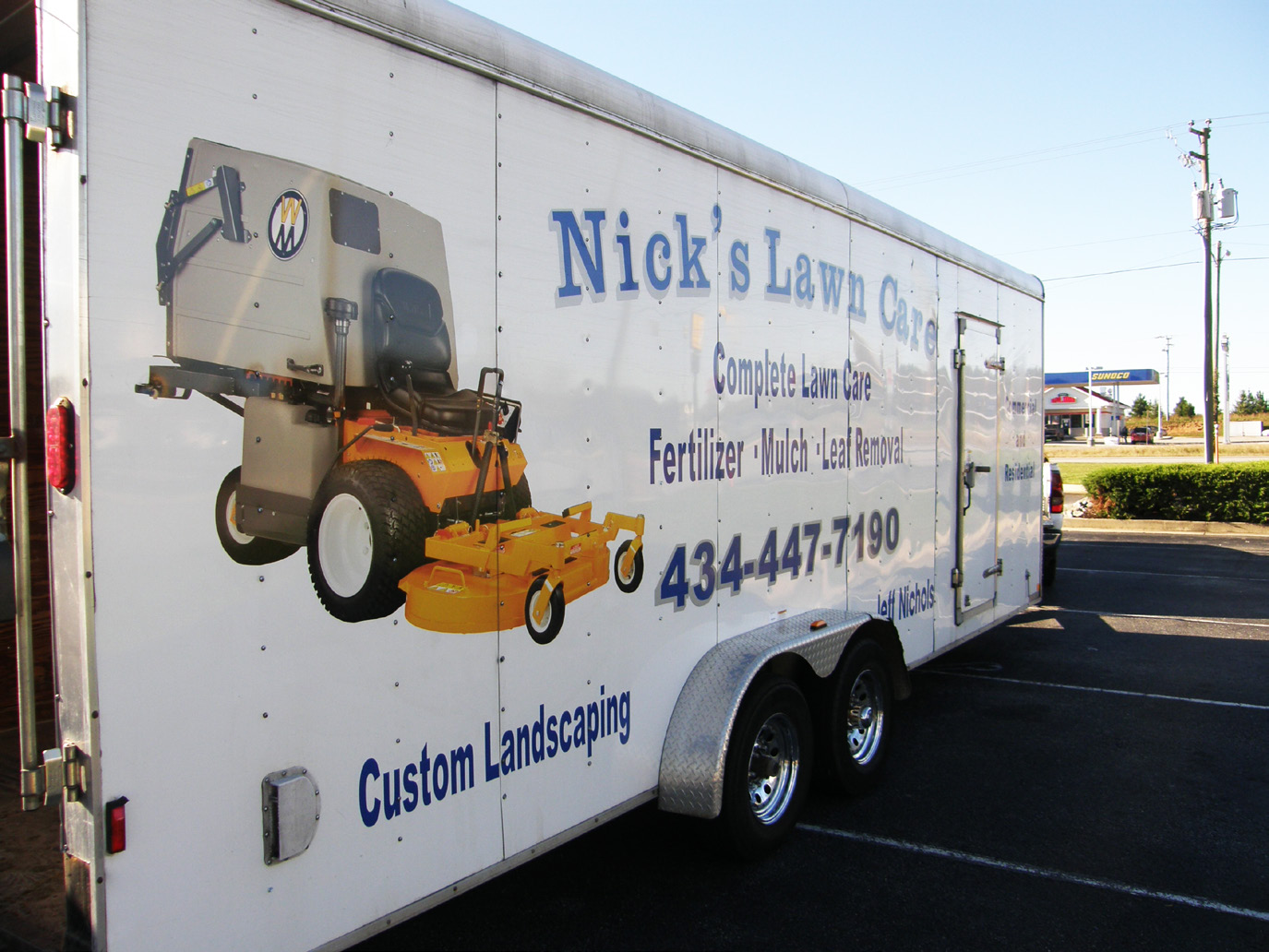 “Jeff sometimes just doesn’t charge enough,” says Angela, who has two full-time jobs, one working at a doctor’s office, and another as secretary and bookkeeper for Nick’s Lawn Care. “He’s a bit of a softy and the last thing he wants to do is overcharge, or in his words, ‘gouge a customer.’”

Nichols nods his head in agreement, adding that, in his defense, he at least learned how to make money from Frito-Lay managers and is still learning from his wife. “There’s no question, Angela is the backbone of our company, andwithout her, we wouldn’t be where we are today.”

Nick’s Lawn Care sits on 10 acres of land with a recently constructed 100-by-80-foot shop with plenty of space to store its five Walker Mowers, four trailers and a couple of pieces of larger equipment, along with a new office promised for Angela.

The new 100-by-80-foot shop will provide plenty of room for expansion now that Nick’s Lawn Care outgrew its last shop..

“Our son, Jonathan, is very involved in the business and we want to grow to help ensure his future,” Nichols emphasizes. “We outgrew our old shop and this one will give us room to expand our operation. There’s plenty of opportunity to grow. The challenge is finding people who are willing to work, and that, too, will be Jonathan’s challenge in the future.”

As he points out, the company’s Walker Mowers ease some of the burden of a worker shortage. “The out-front deck reduces trimming time and they are fast, but not in the strictest sense of the word. Mower speed isn’t everything. We don’t need to mow fast, but we want to finish quickly and leave behind a quality cut. As far as I’m concerned, the Walker Mower is the Cadillac of the industry, and if the company ever goes out of business, so will we. I’ll never use a different mower.”

The mowers lend efficiency in other ways as well. Nick’s Lawn Care just purchased a spreader attachment for its 20-HP Walker Mower for laying down fertilizer, lime and lawn seed. “That one attachment will take the place of two push spreaders,” Nichols emphasizes. The company also has three dethatcher and two boom sprayer attachments for its mowers, the latter used for applying pre- and post-emergent.

“One thing I forgot to mention about our mowers, but something that is very important, is many of the parts are interchangeable from mower to mower,” adds Nichols. “They also have greaseable bearings, which help extend critical wear parts.”

Nichols’ personality is an interesting mix of old-school values. He’s not all about money, he cares deeply for his original customers, and he hasn’t totally embraced social media and Facebook as advertising tools, although he sees their value. One of his most effective advertising vehicles is his enclosed trailers and the large Walker decals he proudly displays on their sides.

“I haven’t done much advertising over the years because you don’t really need to here. Whereas first impressions count, you’re only as good as your last job. That’s where the Walker Mower comes in. Nothing beats its cut,” he says.

There’s another ingredient to building a lasting impression: It’s called developing relationships. This owner loves people. He enjoys talking and sharing thoughts, and there’s always time for his customers. “I know that time is money, but you also have to spend time with your customers,” according to Nichols. Jonathan kids me, saying that I like to talk to customers because it gets me out of work. Maybe it does, but that’s not why I do it.”

As he points out, first impressions may get you the job, but it’s your last job that helps you retain it.