When Ray Amundson purchased his first Walker Mower in 2006, it came with a Hi-Dump. Four years later, he replaced that one with two more, each with that important selling point for him.

“I injured my left bicep in a parachute accident while in the Army and I couldn’t lift bags full of clippings,” the owner of Ray’s Lawn Service in Moorhead, Minnesota, explains. “The Hi-Dump was the ideal solution for me.”

When used in combination with a custom-made trailer, this operator never has to lift a bag again, nor does he even touch a blade of grass in the summer or a leaf in the fall. “You cannot find a more efficient way to handle debris,” he remarks.

“That first year I mowed six lawns, and the next year 12, all small residential properties. In 2006, I added a fairly large apartment complex and needed something bigger and faster than a push mower to get the job done. That’s when I purchased my first Walker Mower from Out Front Power Equipment in Fargo,” says Amundson.

Since that purchase, his company has grown several times over. It now maintains roughly 100 accounts, two-thirds of which are in Fargo and the rest across the state line in Moorhead. Calling himself a mow and trim operator, Amundson works either by himself or with his son, Brady, who is 16 years old.

“I can mow two lawns an hour when working alone or with Brady I can do three lawns,” he explains. “Most of my accounts are small residential properties whose owners are on a fixed income. They need to save money, so I’m very flexible. When grass slows in the summer, some may want their lawns mowed once every two weeks, or sometimes a son or daughter will come home to mow. That’s fine with me; it’s not all about how much money I can make.”

Still, time is money. Handling debris efficiently allows him to be flexible with customers. He points to his son who has just filled the dump box and is heading to the trailer. “Brady can lift the box while traveling and have it ready to dump when he gets to the trailer. Then he lowers it, again all while traveling back to the property. It just takes no time at all to dump the clippings and continue mowing.” 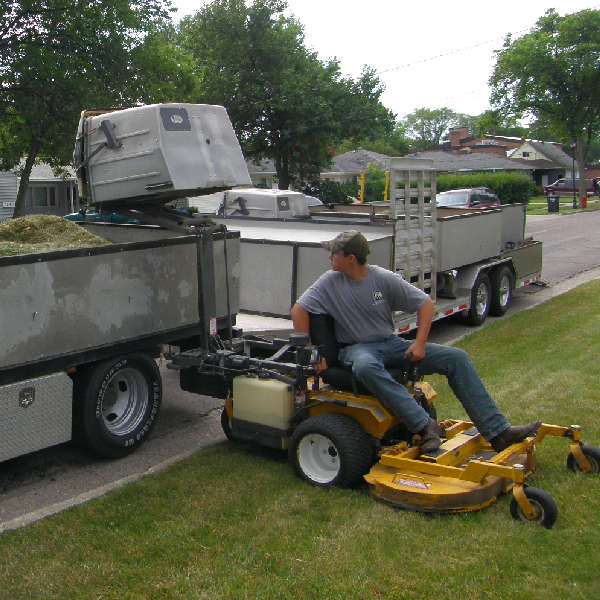 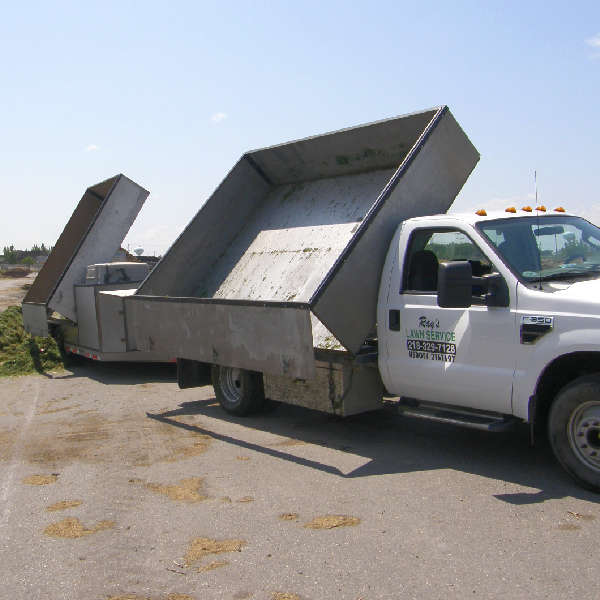 Two recycling locations, one in Fargo and the other in Moorhead, compost the clippings and leaves free of charge. Key to the operation is the 18-foot trailer designed to carry two 26-hp EFI mowers with 48-inch GHS decks and a walk mower. Its custom-made frame takes advantage of all 102 inches in width allowed by the Department of Transportation. The box is positioned over the axles for better balance and to take some of the pressure off the tongue.

Amundson’s Ford F-350 has a similar box setup in its bed. Both operate with single-action hydraulic cylinders. “I found the truck in Washington and took a train ride to get it,” he relates. “It’s not four-wheel drive and a few of my friends wonder why it’s not a diesel, either. I just prefer gas, and as far as the four-wheel drive goes, I put the truck up in the winter. Snow removal is not a big part of my operation. I only have 40 accounts where I blow snow off the drives and walks.”

The two Walker Mowers have logged a total of 3,200 hours between them. In addition to the Hi-Dump feature, this owner likes the way the front deck mows and maneuvers around his smaller properties. “The tilt-up deck makes it easy to replace blades, too,” adds Brady. “We install sharp blades every morning and replace them maybe halfway through the day. You can really tell the difference in cut.”

Halfway through the day is about 6-1/2 hours’ worth of mowing. “One of my biggest overhead costs is fuel, and when we get on the road we want to stay there and not travel back and forth between our shop and accounts,” notes Amundson. “With this approach we can mow all our properties in three long days.”

This day, father is trimming and son is mowing. Brady is handling the Walker Mower like a pro, which is no surprise since he first sat on one when he was 10 years old. “I like to mow close around trees and other obstacles to cut down on dad’s trimming,” says Brady. “But if I’m mowing and doing the trimming, too, I’ll mow even closer,” he adds with a smile. Dad just looks at him and laughs.

When not mowing, the duo spends the other two weekdays and Saturdays working on a new shop and home. The shop is 3,600 square feet and the second-story living quarters is 2,200 square feet. They’ve done much of the work themselves, including laying the concrete floor, framing the building and installing the wiring. Relatives have helped by sharing some of their building knowledge and experience and, says Amundson, viewing YouTube videos also comes in handy. 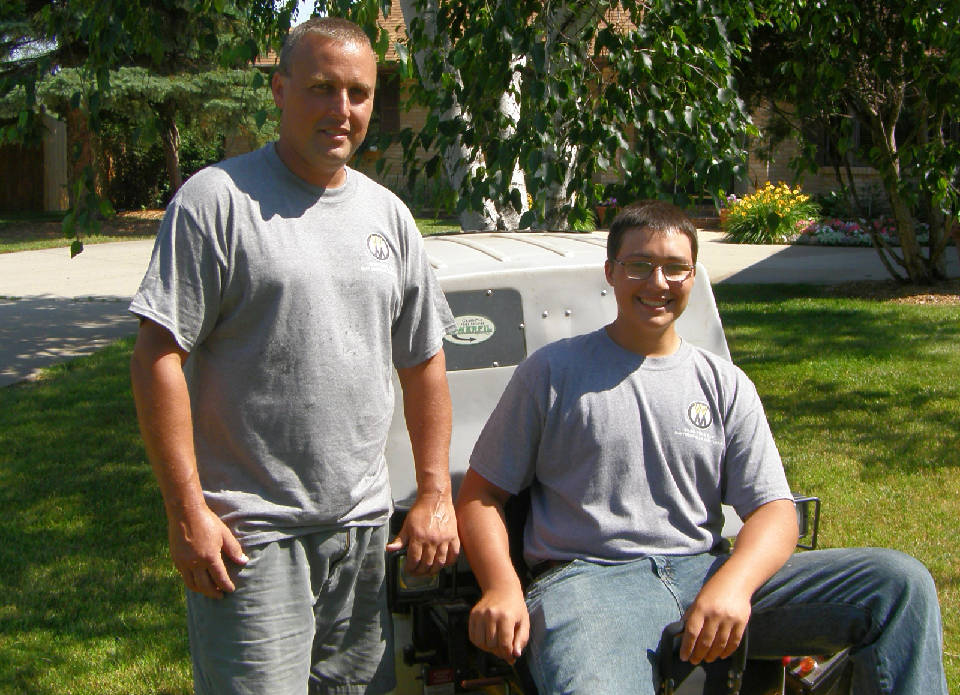 Ray’s Lawn Service is not your typical Walker Mower story, but yet it is. Not all operators want to provide full service, nor do they want to grow and become hugely successful. Amundson’s near-term goal is to continue to grow the business maybe 10 percent a year, split it with Brady when he turns 18, and retire at age 60, 16 years from now.

In the meantime, the company subs out the work or services it doesn’t provide, e.g., large side-discharge mowing jobs, fertilizer application, tree trimming and so forth. When asked about hobbies, Amundson laughs and says there’s not much time for that and, furthermore, he doesn’t want to do anything extreme like parachuting. As he puts it, “I’m self-employed and can’t risk getting injured.”

This fall, his company will be one of many in the area volunteering for the United Way Day of Caring. “Most of my customers are older women who have lost their husbands,” says Amundson. “They need help, and four hours of my time is not much to give up for them.”

It’s all part of being flexible, working with people, and understanding that there’s plenty more to life than just making money. 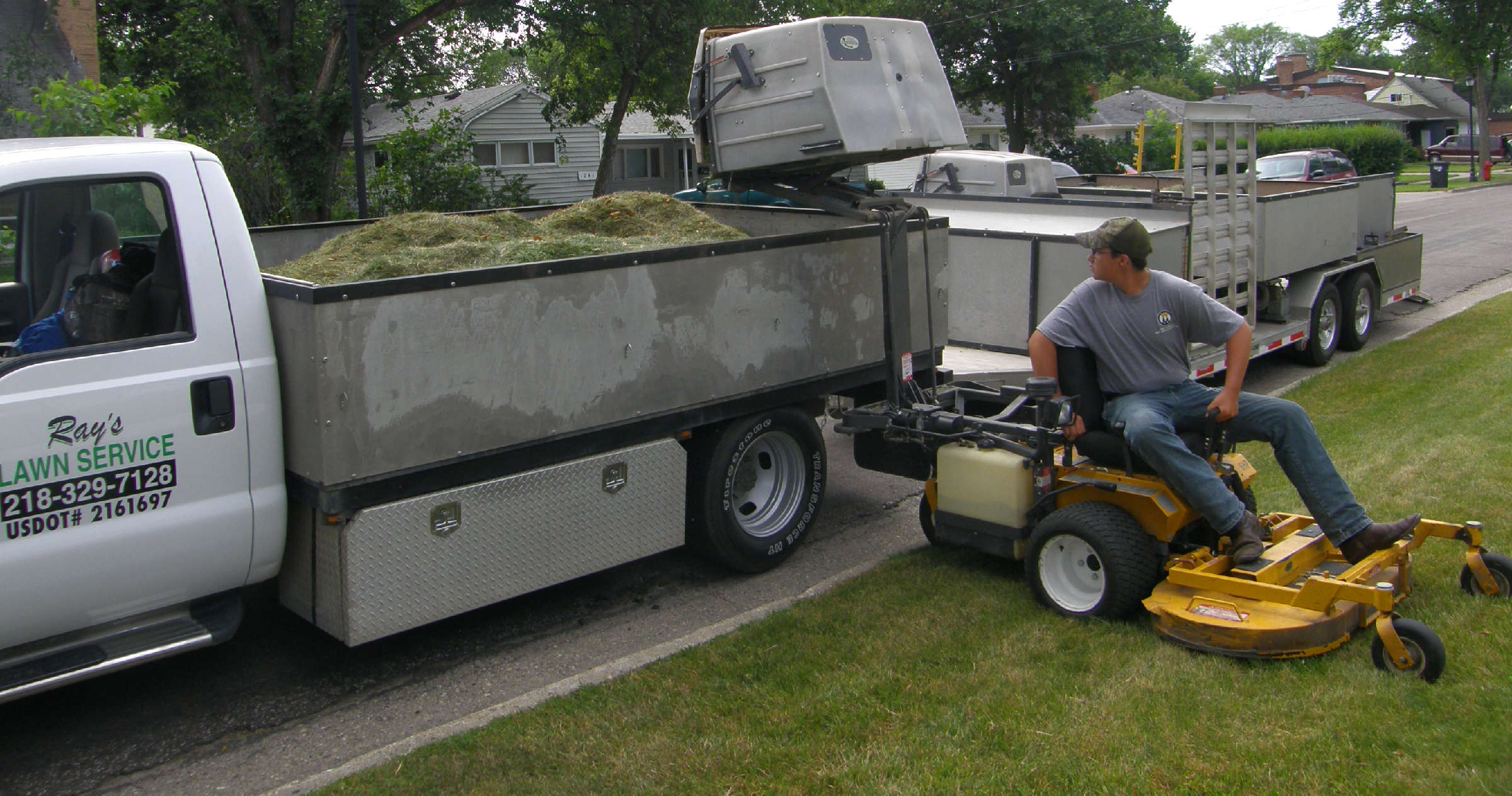