It's Not Just About the Striping 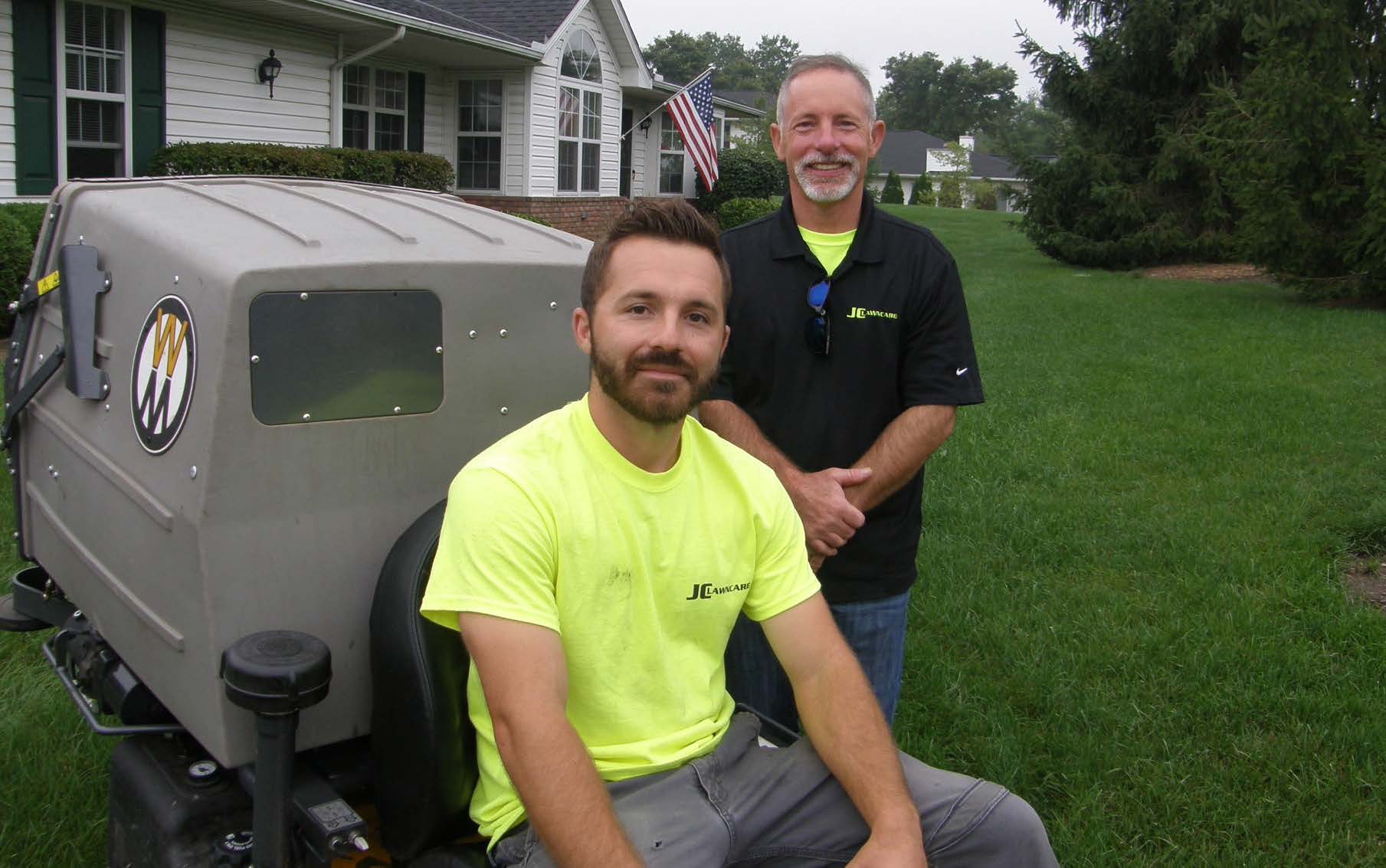 Jeff Craddock with son Austin: Like his dad, Austin started learning the industry and how to operate the equipment at an early age.

When landscape contractors share their thoughts about Walker Mowers, they usually tout the machines’ striping ability, maneuverability, and quality of cut. All these are important for Jeff Craddock, too, but equally important for the owner of JC Lawncare in Strongsville, Ohio, is the mower’s return on investment.

“One of the reasons I was reluctant to purchase a Walker Mower was its cost,” said Craddock. “I could outfit a trailer with a couple other mowers and a few weed whips for the cost of a Walker Mower.” That was his argument when the late Tom Emmett, a long time Walker dealer in nearby Richfield, Ohio, finally convinced him to demonstrate one.

“My employees tried the mower and then loaded it back on the trailer after running it maybe a half hour. I returned the mower to Tom, and sure enough, a couple months later he showed up again with a demonstrator, telling me, ‘There’s always a place on any trailer for a Walker Mower,’” Craddock recalled.

This persistent scenario played out for a couple of years until one day Tom dropped off two demonstrators. “He told me to take two mowers off my trailer and put these two on in their place, so crews had to use them,” said Jeff. “I did, and after a week, my employees thought they were awesome. Shortly thereafter, I purchased two of them with 42-inch GHS decks.”

Jeff said his employees were impressed with the mowers’ grass-catching ability. But for someone with a degree in finance and a minor in accounting from the University of Akron, the new mowers proved something else. They dramatically reduced mowing and cleanup time on his HOA properties.

Jeff purchased his first Walker Mower 11 years after starting his company in 1995. Before then, at the age of 14, he had worked summers for a small family-owned lawn maintenance company. He carried on with the tradition through college, working for a couple of larger national companies. “It was good experience all the way around,” he related. “Working both part-time and full-time, I became a crew foreman, did some selling, and put on presentations for HOA customers.”

After receiving his degree in 1995, the graduate looked at the job market and found that nothing appealed to him. Sitting inside in a cubicle all day was not what he wanted to do. As an alternative, Craddock decided to leverage his landscaping experience. He formed JC Lawncare and with two employees began installing patios and irrigation systems and offering some maintenance services.

Three years later his business model changed when JC Lawncare subcontracted with True Green Chem Lawn to provide maintenance for its fertilizer customers. Jeff sold off his skid steer loader and other equipment used for installations and concentrated on maintenance. Overnight, his company went from doing 70 percent installation and 30 percent maintenance to focusing almost entirely on maintenance. 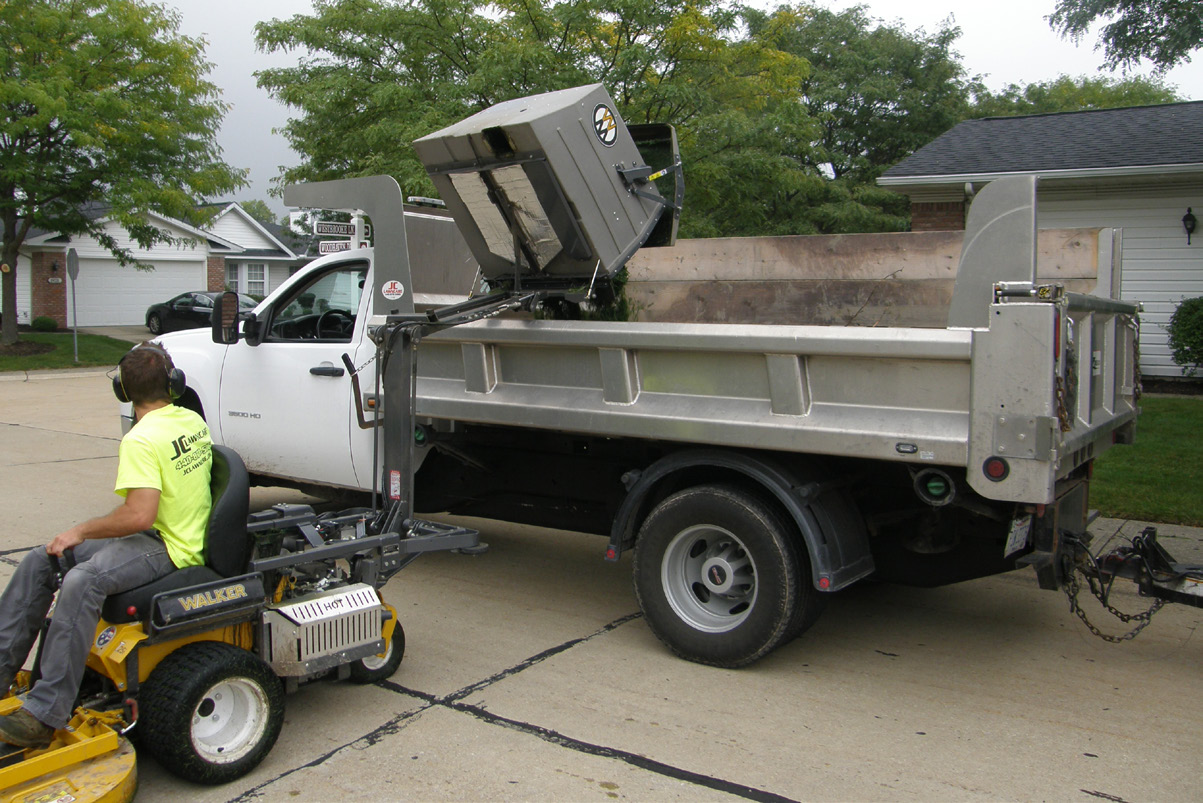 A time study proved to Jeff the Hi-Dump would pay for itself in less than a year.

Craddock said it was a period of huge growth for his company, but it came at a cost. Over the next five years, he put on five maintenance crews and employed upwards of 14 people to handle the subcontracting work. “I was working seven days a week and bringing home less money than before,” he said. “So, I gave up the subcontracting work and concentrated on growing my company, offering full-service landscape services to HOAs, residential customers, and commercial properties.”

Today, the HOAs make up the lion’s share of business, accounting for half of sales revenue. Residences at 30 percent and commercial properties at 20 percent bring in the rest. Crews have been reduced from five during the apex of his subcontracting years to three, and employees now number between six to eight full-timers depending on the season.

JC Lawncare was a favored subcontractor because of the quality of its work. Even companies that provide exemplary service, however, can fail if profitability eludes them. Thanks to his finance and accounting background, Craddock was not going to let that happen.

The owner has developed spreadsheets on all of his properties that illustrate how much time it takes to mow, trim, and provide additional services on each of them. From this picture, he can then extrapolate just how a few efficiencies and time savings can make a difference over the course of a month or even a season. “Three minutes may not seem like a lot of time to save on a property, but if you save that on every property, on every crew, over the course of the entire season, it really adds up,” he emphasized. 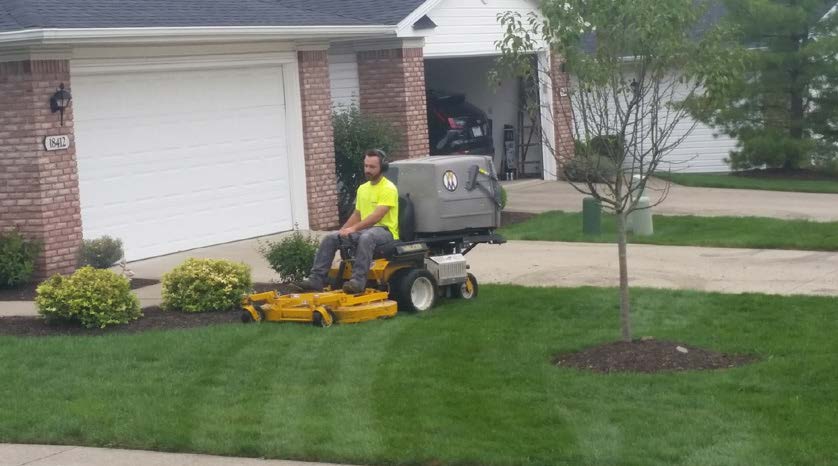 This approach helped justify his first Walker Mower purchase and ensures they are part of his equipment lineup today. JC Lawncare has gone from running 42-inch to 48-inch GHS decks and has even added a Hi-Dump attachment on one of them. “After doing a time study on the attachment, I found it would pay for itself in less than a year in man-hours saved,” Jeff added. “Then there is the safety issue, too, of not having to get off a machine and lift heavy bags of wet grass into the back of a truck.”

Spreadsheets, time studies, and labor-saving equipment all came in especially handy this year in Strongsville. Because of Covid- 19, area landscape contractors were virtually shut down from mid-March to late May. They were allowed to do some things (e.g., mow lawns that were unsightly and provide a few other lawn care services). Even then, they could only allow one person per truck. JC Lawncare rearranged its crews from three to one, purchased a few more trucks, trailers, and equipment, and tried to get the work done as efficiently as possible. Crew size restrictions were partially reduced in May, allowing two people in a truck, but some obstacles remained.

“It has been a tough year for landscape contractors, and continues to be difficult,” Craddock conceded. “We are fortunate to have good customers, and our employees really knuckled down to get the work done.”

He noted that in the lawn care industry, there is always work, but being successful depends on so many factors. “Understanding your financial position is important, but so too is developing a good reputation, doing quality work, building relationships with customers, hiring and training good people, and ensuring that crews are knowledgeable to be able to answer customers’ questions.

“The last thing you want is for a customer to ask a crew member a question and then hear, ‘I’ll get back with you tomorrow with an answer,’” Craddock said. “Our crew members, many of whom have been with me eight to ten years, are knowledgeable to the extent they have become our salesforce for add-in services.”

One of them is Jeff’s son, Austin, who, at age 26, is an account manager. Like his dad, he started learning the industry and how to operate the equipment at an early age. He’s there with other company veterans to help out when Craddock is off at his second full-time job as operations manager for his father-in-law’s manufacturing company, something he’s been doing since 2003.

“I don’t worry about things getting done when I’m not here,” Craddock emphasized, referring to his lawn care business. “My employees have been empowered to make good decisions and they do.”

Splitting time between two full-time jobs seems laborious to most, but Craddock takes it in stride. “Having two full-time positions isn’t bad when one of them, operating a lawn care company, is your passion,” he said.