When It Comes to Space, Perception Isn't Reality

Walker dealers, users have found that transporting their mowers is as easy as 1-2-3

One concern potential users of out-front mowers have is space. Say skeptical operators, “I would consider an out-front mower if I could get two, maybe three, on my trailer. There’s no way I can afford to buy a new trailer, maybe even a new truck, just to accommodate them.”

There’s a mower for every application, and professional mowing contractors do their best work when they find a machine that fits theirs. To forsake that machine because of space concerns, in this case because an out-front deck seemingly takes up too much space, would be both unfortunate and unnecessary.

When hauling two Walker Mowers and a push mower, Marcus Buchanan doesn’t tip the decks, but loads the one with the mulching deck last.

Veteran Walker Mower dealers and users have found that transporting their machines is as easy as 1-2-3: loading them on their trailers, tilting up their front decks, and positioning them to accommodate another zero-turn mower, push mower, or whatever needs to be hauled to the next property.

“We move Walker Mowers all the time and don’t want to make extra trips when delivering them,” said Ed Struk, technician with ACE Power Equipment in Cream Ridge, NJ. “Hauling them with a 16-foot trailer, I drive them up the ramp, tip up the deck, put my knee on the seat, and gently turn each one 90 degrees so they line up nice and straight. This way we can get four mowers with 48-inch decks on the trailer, and maybe more if they have smaller decks.”

He continued, “Not only does tipping the deck make it easy for delivering to customers, it is a great selling point. We have made many sales at our dealership just by advertising the benefits of fitting more mowers on the trailer.”

Unless you’re an operator maintaining large commercial properties, hauling around four Walker Mowers at a time would be unusual. Trailering one or two is a more likely scenario, something that Marcus Buchanan, owner of Allegiant Lawn Care in Rose Hill, KS, has been doing for three years.

“I usually haul two Walker Mowers and a push mower to my properties,” Buchanan said. “One mower has a 48-inch GHS deck and the other a 42-inch mulching deck. Since I mulch about 70 percent of the time, that mower is loaded last. I can easily fit both mowers on the trailer with plenty of room for a push mower nestled next to the GHS mower even without tilting the decks.”

With the second configuration, Buchanan adds a 27 hp Model H to the mix. Once again, he backs them all on, his GHS mower first, followed by the mulching mower and the Model H. He sets the parking brake and tilts all the decks, leaving enough space between the mowers and decks so they don’t rub against one another.

“When loading, I position the push mower to the back, next to the GHS mower, and strap it down. Walker Manufacturing recommends strapping the decks down, as well, so they don’t bounce around and damage the rear caster wheels or another machine. I don’t show that here, but the decks would be strapped in transport,” said Buchanan.

Steve Lezzer gets three mowers on his dmeo trailer, including a Model H with a 52 or 64-inch deck, using a slightly different approach.

“I can get three on my 16-foot demo trailer by backing the first one up and tilting the deck,” he said. “Then, I drive the second one up, tilt its deck, and turn it 90 degrees. Finally, I back the third one up and tilt the deck.”

Both Buchanan and Lezzer have a few additional tips for loading equipment. Buchanan admits to being an organizational buff. Notice in the aerial view how fuel containers, the backpack blower, and trimmers all have their place in special side racks. The racks keep them off the trailer floor and from bouncing around, and all three can be locked. 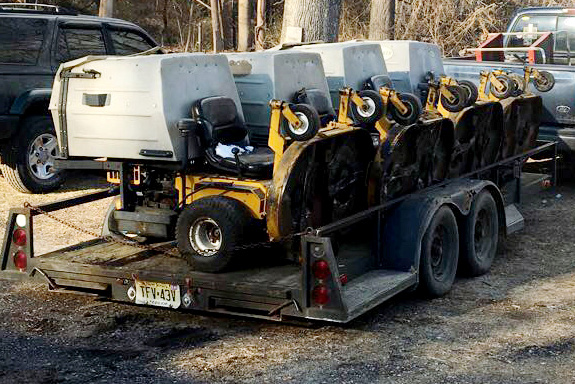 “Tipping the deck is a great selling point,” said Ed Struk, technician with ACE Power Equipment in Cream Ridge, NJ. “We have made many sales at our dealership just by advertising the benefits of fitting more mowers on the trailer.”

He also strives to keep his loads balanced, with approximately 60 percent of the weight near the trailer hitch and 40 percent to the rear.

Lezzer advises operators to ensure the trailer is level before loading.

“If the ramp is too steep, there’s a chance the deck will catch on the ramp’s hinge point,” he emphasized. “Making sure the mower deck is at a high position will help guard against this, as well.”

Trailers come in all sorts of sizes and configurations, and they haul a wide variety of equipment. When it comes to hauling Walker Mowers, however, perception isn’t always reality when it comes to saving space.