Zeke Rhodes makes his living designing plumbing and HVAC systems, but the real living starts when he’s outside on his Walker Mower.

“If you’re ever going to have a stroke, I guess the best time to do it is before you’re born.” Those are the profound and very personal words of Zeke Rhodes, a 35-year-old husband, father and lawn care enthusiast. That is exactly what happened to Zeke, leaving him without any fine motor skills on his right side. But since he was born that way, Zeke never knew anything different and didn’t have to relearn anything. It was just the way things were. In a way, Zeke says, that gave him an advantage. 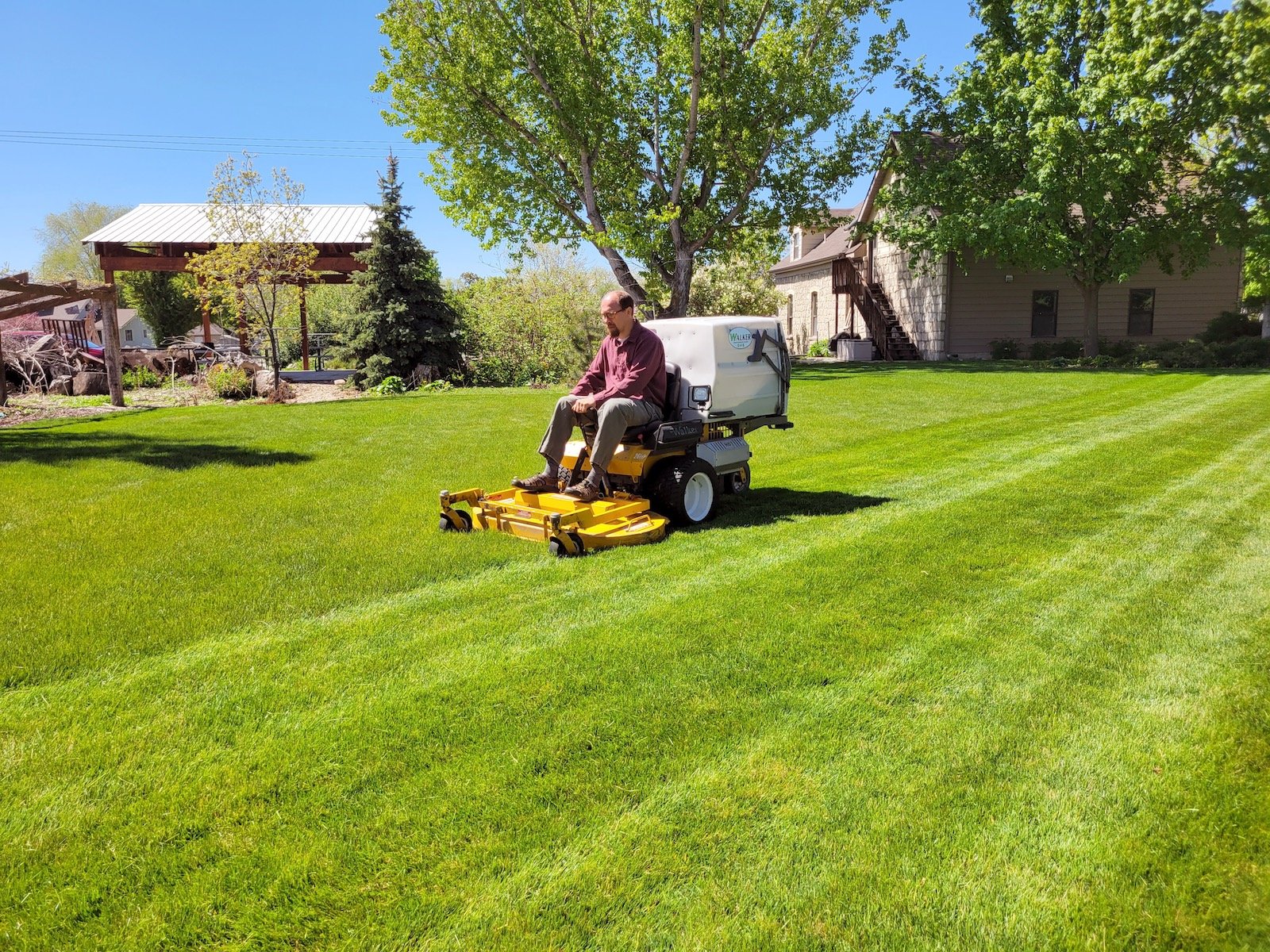 Randy Rigby put Zeke on “the yellow one” when he was just 12 years old. Now at 35, Zeke still won’t mow with anything else.

Born and raised in the small northern Utah town of Newton, Zeke loved mowing lawns from the time he could barely reach the handlebars on a push mower. When Zeke was nine years old, a gentleman named Randy Rigby moved to town and started a landscaping company. “Randy became my idol growing up,” Zeke says.

Randy and his wife got to know Zeke’s parents, Kevin and Teri, through church. “My wife thought Zeke was adorable and wanted to adopt him,” Randy says with a smile. Zeke’s parents had a better idea. “They said I should apply for a job with Randy,” Zeke says. “So that’s what I did.

After a casual job interview, Randy led Zeke outside to check out some of the landscaping equipment.

“I’ll never forget what Randy said to me after showing me around,” Zeke recalls. “Randy said, ‘You know, I think I’m going to put you on this yellow one.’ He set up some cones in his yard and let me drive the Walker around a while. I did my best and have been hooked ever since.” 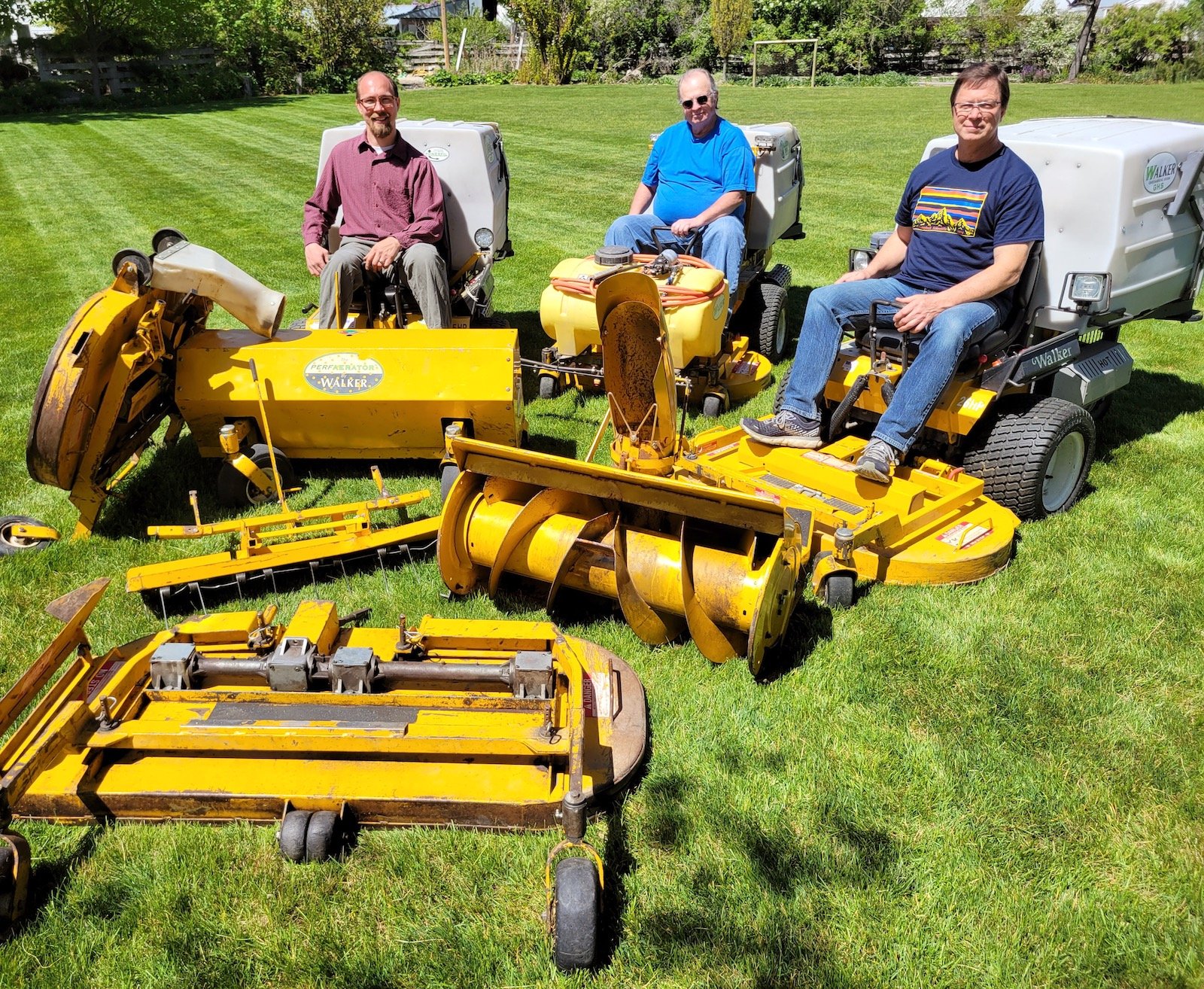 Zeke must have done pretty well because Randy hired him. Zeke credits the easy controls of the Walker Mower for his short learning curve. “With my right arm the way it is, pushing those big levers forward on a typical zero-turn mower can be hard,” Zeke relates. “There’s just something about a Walker. It’s just easy, and that makes it fun to run.”

While Zeke credits the Walker itself for his operating skills, Randy credits something else: Zeke’s character.

“Zeke meant everything to my business,” Randy says. “Zeke never backed down from anything and did everything anybody else would do. When he got his driver’s license, Zeke even drove one of my trucks and went off and mowed on his own.”

“Yeah, I’d pretty much do anything Randy asked me … except ride the Dixon,” Zeke says while bursting into laughter. He’s talking about the once famous blue zero-turn mower that has since faded into the history books. But “the yellow one,” as Randy once referred to the Walker, continues to be a big part of Zeke’s life today.

“When I was a kid working for Randy, all of my friends were buying dirt bikes and things like that,” Zeke remembers. “But I was saving up my money to buy my own Walker.” A year or two later, an opportunity presented itself.

Randy told Zeke’s dad about a used Walker he saw for sale down in Salt Lake City, about 1.5 hours south of Newton. “It was in a price range I could afford, so that’s when I bought my first Walker,” Zeke tells.

Rhodes ended up working for Randy for five years, and then another two for the person Randy sold his business to. Once he became the proud owner of his own Walker Mower, Zeke also started a business of his own on the side, a business he sustained while going to college.

A Passion for Mowing

Today, Zeke makes his living designing plumbing and HVAC systems. It’s a far cry from what he went to college for, but he enjoys it. He also continues to enjoy his Walker Mower. In fact, he has four of them, along with several attachments. The aerator, dethatcher and one mower stay at Zeke’s parents’ house in Newton. The other mowers, along with the sprayer and snowblower attachments, are up at Zeke’s place in Preston, Idaho, about a half-hour to the north.

“Along with my parents’ lawn, I still aerate and dethatch a few lawns in Newton,” Zeke says, adding that he could never completely give up his passion. “But I more or less had to get out of the lawn business once my career got going. With the way the building market has been around here, my job has been just insane. But I still love my toys. It’s not just cutting grass to me. Getting out in my own yard with my Walker is therapy.” 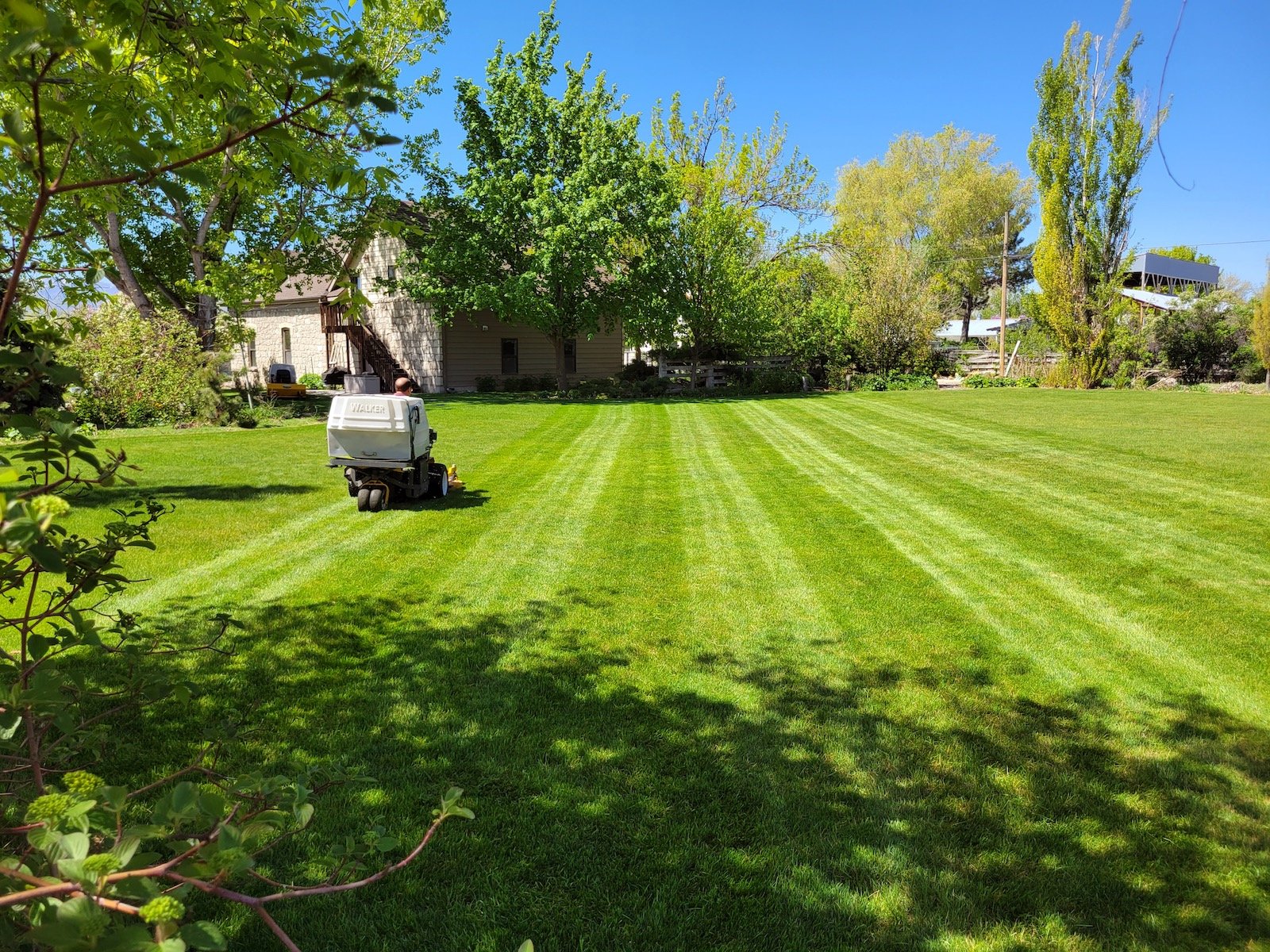 Randy Rigby put Zeke on “the yellow one” when he was just 12 years old. Now at 35, Zeke still won’t mow with anything else.

Zeke’s mom, Teri, feels the same way. The yardwork duties are very defined at her house. She handles the mowing with the Walker, a machine she is just as captivated with as Zeke is. Zeke’s dad, Kevin, is on weed patrol. Teri admits that she has the better end of that deal. She also admits that she is nearly as fanatical about her stripes and patterns as her son. “I told Zeke that we might as well just sell this place if he ever decides to take his mowers back up to Idaho with him,” Teri says.

It is pretty remarkable, really. On the day Walker Talk visited, the editor grew a bit concerned as he made his final turn onto the road leading to the Rhodes family home in Newton. House after house didn’t have much lawn to speak of, thanks to the area’s arid mountain climate. But when the GPS voice said, “You’ve arrived,” it was like being transplanted to a completely different environment. The front yard is well-landscaped with mulch, defined beds, and healthy trees and shrubs. The lawn in the back is irrigated, fertilized and treated for pests and weeds.

“Lawn pride” is definitely something that runs deep in the Rhodes family. Back up in Preston, Idaho, Zeke’s two young boys, 10-year-od Jackson and 5-year-old Brody, are already obsessed about learning to run the Walker.

“Now that my sons are getting a little older and need something to do, maybe I’ll find a few customers up here so they can eventually get a stake in the game, too,” Zeke says. After all, Zeke Rhrodes started mowing with a Walker as a young man. “If there has been a theme in my life, it’s Walker,” Zeke says. 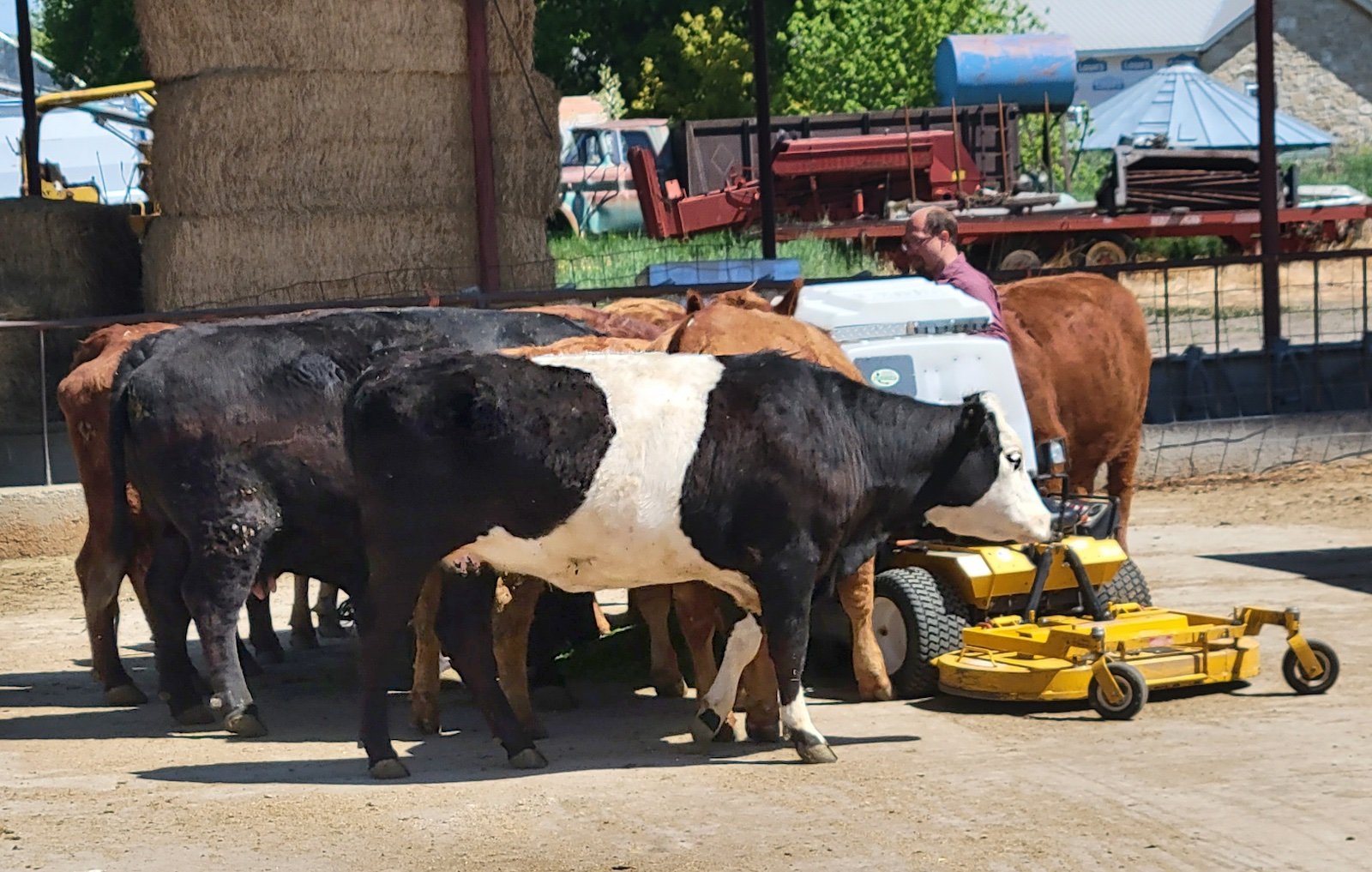 Zeke’s parents have some cattle to go along with their lush backyard. When Zeke pulls into the pen area with a hopper full of grass clippings, the hungry cows know it’s snack time.